After playing Ori and the Blind forest and Bloodborne, I wanted something else to challenge me. Titan Souls sounded like the perfect game, and I’ll admit I headed into it with some hubris. I knew it would be tough, but I didn’t think it would test my skills compared to the other games. Not only did Titan Souls grind my last nerve, but it was also extremely rewarding, albeit, short lived.

Titan Souls takes place between Earth and the “world beyond.”  The Titans are guarding the souls which the hero is seeking to become powerful. I only know that because I looked it up. The game doesn’t explain that at all. I would’ve liked to see a little bit more of a story, not a lot, and not even dialog, but something to give it that extra push in my mind. The world was filled with mystery and I wanted to know more. It had a Shadow of the Colossus feeling to it; only without the added emotional attachment. There was no real climax or intensity besides each individual fight. It never felt like a whole game, only pieces that never fully formed a puzzle. 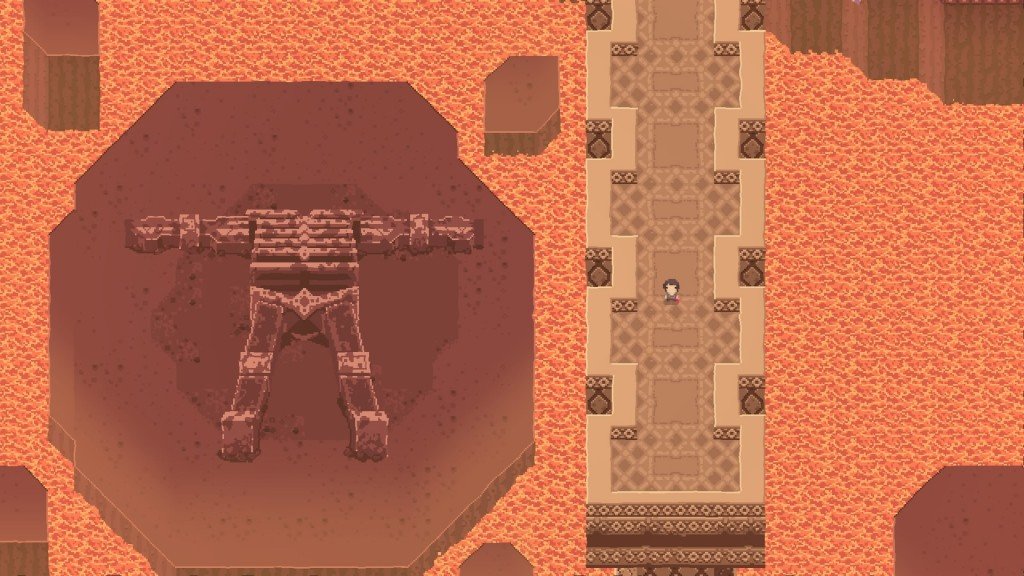 The story and character may not have held much meaning in my mind, but the world the developers created is impressive to say the least. Titan Souls is a top-down, 2D game, but as we are learning more and more, graphics aren’t needed to present a remarkable setting. The land is detailed with architecture to paint the vivid picture of a mysterious land, and I was seriously surprised by how beautiful the soundtrack was. It isn’t the most diverse with a deep orchestra, but in its simplicity, it accomplishes a lot. The boss fights are resounding and powerful, but when walking through the empty world, a peaceful and tranquil melody guides you.

Sadly, (or gladly) you aren’t there to listen to the majestic music and see the sights. You’re here to kill Titans and steal their souls. It is the only premise of the entire game from start to finish. It nails what it sets out to do and gives you some nerve-racking thrills in the process. Better yet, even if some of the strategies for fighting the Titans were similar, it never felt repetitive.

The premise of Titan Souls is every character only takes one hit to die, and yes, this includes the bosses. You only have one arrow you can fire. When you miss, and you will, you can run after it, or stand still using magic powers to suck it back to you. Naturally, the big Titans aren’t going to stand by as you pull the arrow back to your quiver. Precision is the name of the game. 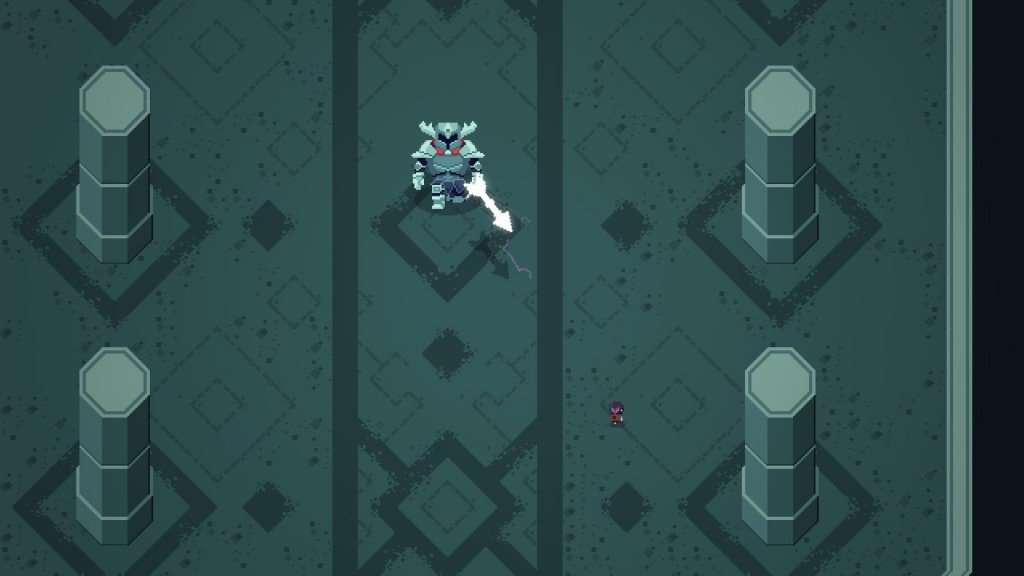 Every boss has their own fighting style, which makes each fight feel new, but at the same time, you are always looking for that one opening. The battles often feel like a puzzle at first. You have to see what attacks a Titan has, and wait for the proper time to strike. Utilizing that opening is another matter entirely.

I stated earlier I was a little cocky heading into Titan souls, because I was playing other challenging games that I thought have made my reflexes the best they’ve ever been in gaming. Titan Souls proved otherwise. Other games may be challenging, but Titan Souls has no mercy in the sense that even one tiny mistake will end with you failing. You don’t have armor that takes a hit for you, or a second arrow to fire in rapid succession. Often times you get one chance to triumph or perish.

The beauty of Titan Souls is how quick these battles are. They can last mere seconds. There were plenty of times I walked into a room, initiated the battle, and was smashed a second later. Even after memorizing the Titan’s moves, sometimes I still would get crushed after I made a single error. 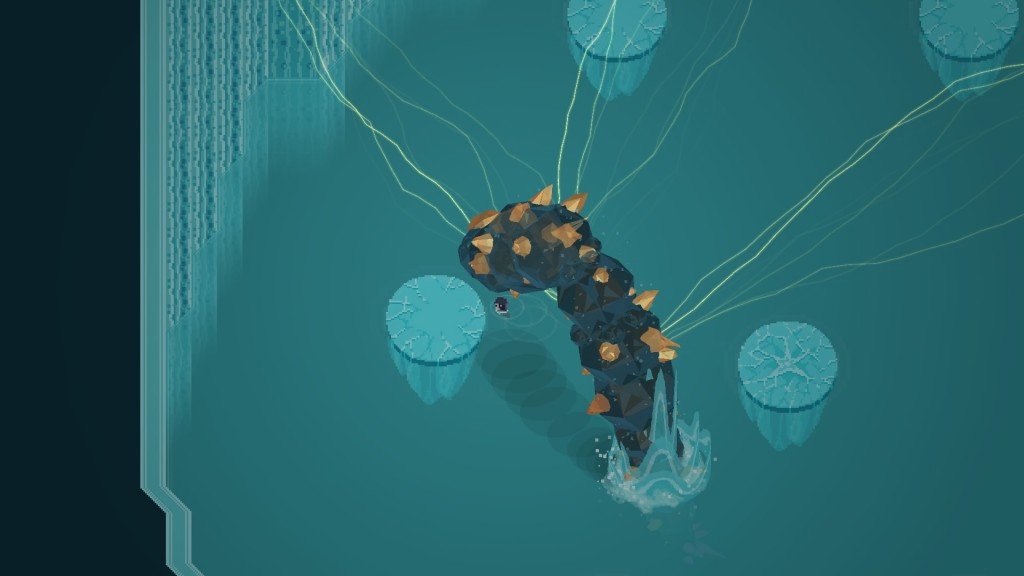 That’s the kind of battles Titan Souls has. They are high octane, fast paced, constant action from the beginning. There are no big health bars you whittle down to have the boss transform with only a 1/4th of its health left to reveal a whole new move that wipes you out instantly (looking at you Bloodborne). After a couple seconds, you will see the entire skillset any Titan has and then it is just a matter of figuring out how to kill it. Once that is figured out, accomplishing that task is the next problem to overcome.

I love how fast these battles could be. I do not exaggerate when I say for some of them I held my breath through the entire fight. I didn’t realize it until I would exhale at the end from either dying or conquering. Dodging every move perfectly and lining up that one arrow shot is easily one of the most intense experiences in gaming.

It is true some bosses are easy to figure out and aren’t hard to kill at all. Some I won on my first attempt after only a dozen seconds or so. Others had me stuck for a good thirty minutes and made for some extreme frustration. I beat it eventually, and let out a real shout of victory. Truthfully, losing to it wasn’t the annoying part, it was taking the shameful walk back to fight it again. 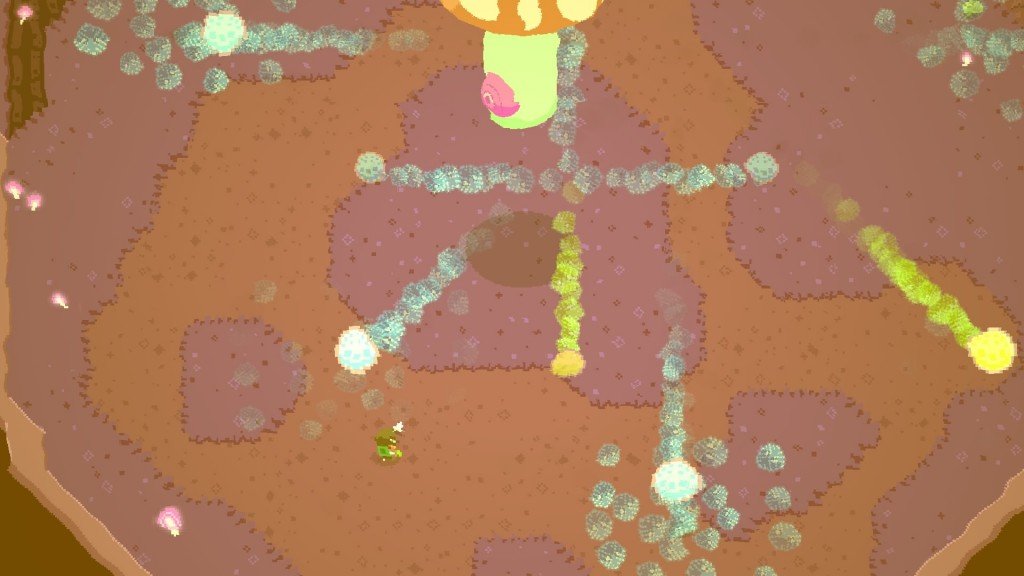 The checkpoint is placed between a few bosses so you always spawn nearby. This is going to sound like nit-picking, but sometimes walking back to the boss can take over ten seconds. That doesn’t sound like a big deal, but if you die within seconds, the walk back is longer than the actual fight. When you get stuck on one boss, those ten seconds add up to minutes of walking. It is truly my biggest complaint in the game, and it easily could’ve been fixed if the checkpoint was placed right outside the door. Getting back into the fight immediately would’ve made everything a whole lot better.

The other biggest issue isn’t technically a problem, but something to be weary of if you’re looking to purchase Titan Souls. It took me 3 hours to finish the game, and many people do it a lot faster. Half the fun is knowing how to beat the titans, and I never wanted to fight a Titan again after I beat it. There are extras you can try to make the game harder like no rolling and only one life, but that’s for the hardcore gamers.  I’m not going to pretend I’m on that level. The game itself is wonderful and worth experiencing if you’re into challenging games that follow after Shadow of the Colossus. Maybe down the line, when my memory forgets the way to best a Titan, I’ll boot it up once again. 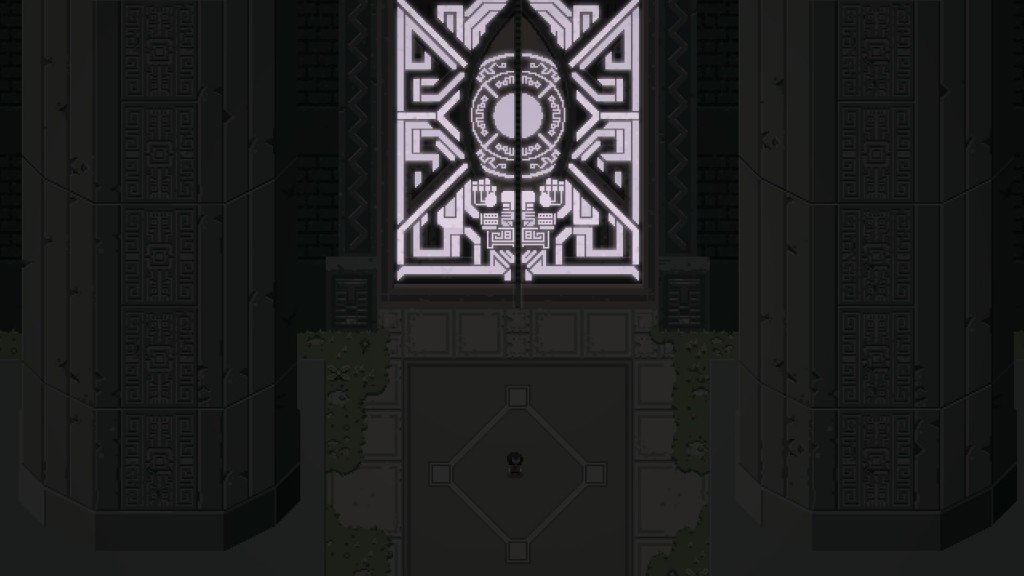 I do love Titan Souls. It accomplished what I expected it to, and therefore gave me satisfaction from playing it. I wanted a tough game that would give me thrills. It tested my skill and resolve, while not being unfairly difficult. When I died, it was my fault. The biggest problems are the checkpoint locations and the lack of longevity. It’s a very well made game that suffers from elements that can easily be overlooked. I had fun with Titan Souls, and its challenge is something I’m proud to say I conquered…even if it took me 150 deaths.

This review is based off a review copy of the Playstation 4 version of Titan Souls developed by Acid Nerve and provided by Developer Digital.