Dynasty Warriors is a fascinating series. For one, there seems to be at least one entry in the series every single year. Two, there’s the general dislike for the franchise in the gaming community since it very rarely innovates and seems to stick to what worked a little too often. Yet through all of that, Dynasty Warriors still comes out consistently, and it seems to do well enough to warrant the consistent release of the much criticized series. While Dynasty Warriors: Gundam Reborn is technically the fourth entry in the collaboration between both Dynasty Warriors and Gundam, the game is re-titled Reborn, though the game doesn’t change as much as the new title may suggest.

Almost everything about every other Dynasty Warriors game can be found within Gundam Reborn, and it always seems to be hit and miss. The hack-and-slash gameplay is still fun, though continuous play can reveal just how shallow and dull it can become. The large stages create huge set pieces which attempts to deliver a scope that truly feels like a conflict between two feuding forces, but the dumb AI and uninspired environments destroys the illusion before it can materialize. Enjoyment of the gameplay has always been a love it or hate it ordeal, and it’s satisfaction relies on each gamer’s individual investment into either of the titular series.

There’s no way to deny that Dynasty Warriors games have stuck to their guns regarding their formula. You’ll hack, slash, shoot, and unleash powerful specials to destroy mindless enemies in order to decrease their stake in controllable territories. Doing so usually progresses the level to either reveal new controllable territories, or important enemy pilots with show up to try and stop you. When first beginning play, slashing through hundreds of enemies and seeing your kill counter pile up is admittedly addicting, and the idiotic AI mixed with your god-like power makes the quick power trip initially fun, but the absence of a real challenge harms the overall enjoyment significantly. Once you really dig deep into the game and spend a fair amount of time playing, which is necessary to unlock a lot of extras, the repetitive nature of the game changes from an entertaining experience to what feels like a chore the game is asking you to complete instead of creating fun missions to make you want to continue without force. 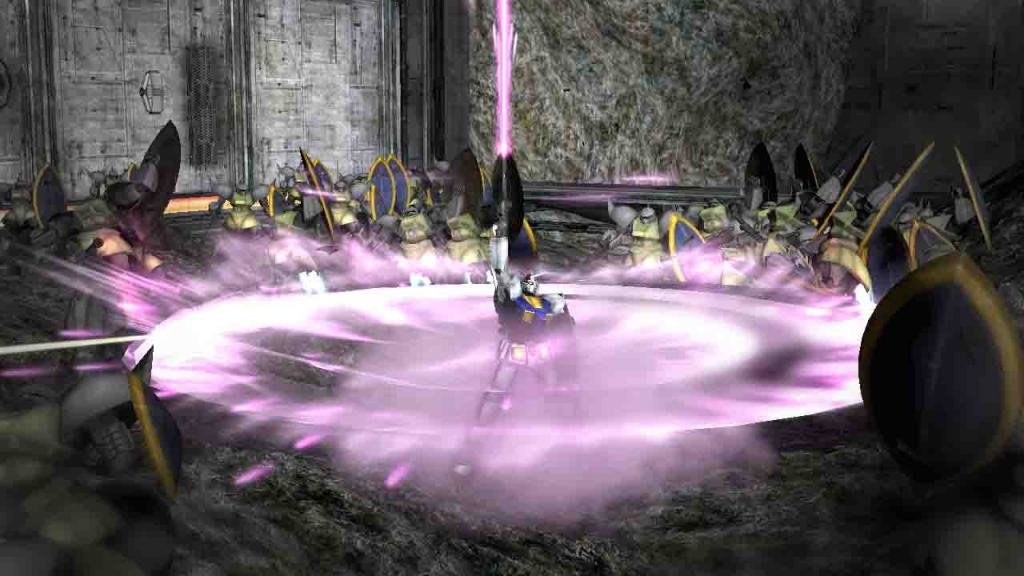 This time around, you can fight giant gundam boss battles, though the fights themselves don’t live up to the advertisement. The fight is bogged down to targeting pieces of the giant gundam and destroying them individually to weaken the gundam. This isn’t any new kind of boss battle, but the main frustration found here is actually reaching the higher parts to attack them. Your gundam has the ability to slightly raise or lower its level with their respective jetpacks, but you have limited power to use them. The pieces on bosses take a long time to destroy, and having to contstantly use your jetpack, hit it, wait for the jetpack to recharge and repeat takes any fun out of the fights whatsoever. Not only is navigation sometimes troublesome, the camera can get stuck in corners – especiall against giant gundams – and it quickly becomes a frantic fight to readjust your camera to view the ensuing battle.

Luckily for fans, Gundam Reborn is chalk full of great content for those that have followed any of the various shows or manga. The amount of gundams you can pilot is quite hefty, along with the pilots you can choose and then upgrade to allow them to pilot Gundams they normally couldn’t. I personally had to pick my favorite Gundam pilot and Gundam, Domon Kasshu and his Burning Gundam, from the Mobile Gundam G Fighter story. Being able to pull off some of the moves found in the original anime and manga is great, and it helps spice up the somewhat dry combat. What’s unfortunate about Gundam Reborn, and all of the Dynasty Warriors: Gundam games, for that matter, is that they usually take advantage of the Gundam content and fill their games to the brim with it, but they just can’t marry the two franchises to find a good balance between the two gamplay wise. Gundam stories deal with deep rivalries between characters and factions, but plugging those characters into the Dynasty Warriors formula does no justice to the rivalries. Instead of changing up the gameplay to be more complex to allow battles to be tense and personal, you’ll simply just fight each rival over and over again. It creates no anticipation whatsoever, and it derails most of the set-up that the story does a fairly good job of providing. 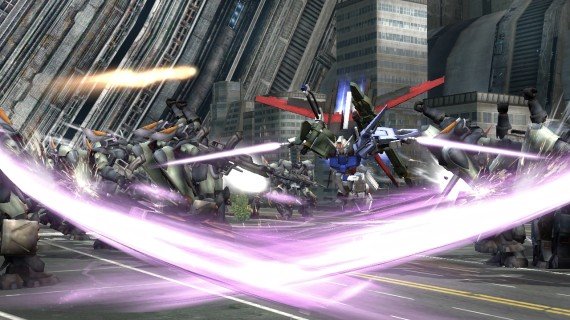 The story mode, which is called “Official Mode,” in Gundam Reborn initially revolves around the rivalry between classic characters Amuro Ray and Char Aznable from the original Gundam story and a handful of anime programs beyond, and the other half of story mode is populated by the Unicorn and SEED story lines. I’d personally never seen the first couple of Gundam animes, so I was excited to experience the story from a fresh perspective. Gundam stories tend to have many interweaving plot lines and interesting relationships between characters, but Gundam Reborn took some shortcuts to present the stories in a much more streamlined and to-the-point fashion. While the motivation from the story definitely comes across, I felt often that characters’ deaths or other climactic moments didn’t carry as much impact since there wasn’t much character development outside of the main hero and antagonist from each of  the six official mode story lines.

The majority of the storytelling is told through stills of the various Gundam anime and slightly changing character cutouts, and it works decently for the most part. Every so often, a fully animated cutscene with the characters and gundams is featured, and it’s generally for the climactic battles of each storyline, which is a nice reward for getting farther in the story, but the game could have benefited much more if the cutscenes were laden throughout the whole story. Gundam Reborn does a great job of laying out conflicts and explaining the situation through narration. A map of the area will be shown during the story periodically, and it will detail the formations of enemies and allies, and it helps raise the tension of the game by making you feel like you’re preparing for a battle in the universe.

One of the key problems in Gundam Reborn is that the game is spoken entirely in Japanese, and  you’ll have to rely on English subtitles to follow along with the story. In the anime, this isn’t too bad, because you can just focus on watching the show while glancing down to read, but in a game, it becomes hard to keep up. I found myself in countless scenarios where I was fighting hordes of Gundams, then suddenly a key story element is developing, but since it’s only with English subtitles, I have to take my eyes off the battle to look at the text below. This creates the unfortunate predicament of choosing to focus entirely on the battle, or to mindlessly button mash while ignoring my foes to look down and stay in the loop of the story. Although Gundam Reborn suffers from the same idiotic AI that the series is famous for, neglecting the fancy looking combos to follow the story shouldn’t have to be a sacrifice for the player to make. The Japanese voice acting is epic, and it captures all of the emotion and tension found in Gundam stories, but the inability to provide an English track to better suit western players significantly handicaps stories that are otherwise incredibly rich and worth your time. 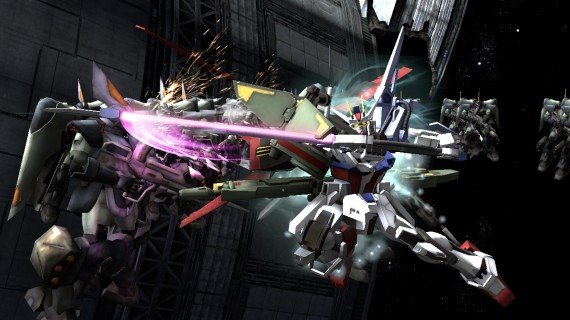 Also offered in Gundam Reborn is “Ultimate Mode,” where you can pilot a gundam and pilot of your choosing, and you’ll fight in short accompaniments of missions that are a little more demanding than the story mode. I spent most of my time playing in this mode, because being able to upgrade my favorite gundams and use them immediately in battle was a nice break from being forced to use the gundams in the story mode. The story is fairly light here, so it’s a great mode for jumping in to take out some gundams.

Instead of truly being reborn like its namesake, Dynasty Warriors: Gundam Reborn rests on the old Dynasty Warrior tropes and feels like all of its ancestors before it. This may satisfy the mindless hack-and-slash hunger you have, but with the great Gundam licence, it seems like the gameplay doesn’t match the intensity and tension found in the anime and manga it’s based from. There certainly is a lot of issues with Gundam Reborn, and it hasn’t corrected issues of the past. Gamers who have no interest in either Dynasty Warriors or Gundam likely won’t find the game worth their time, but fans of the either series can likely find something to enjoy about the game. It’s just unfortunate knowing that the game could have really evolved into something better to move the franchise forward, but instead it’s just more of the same.

Ultimately, for a game that’s labeled itself as “reborn,” Gundam Reborn is almost identical to past entries, and this may be a good or bad thing depending on your view of the Dynasty Warriors series, but it’s easy to see that the apple hasn’t fallen far from the tree.

This review is based on a review copy of the PlayStation 3 game Dynasty Warriors: Gundam Reborn by  Omega Force and distributed by Bandai Namco.