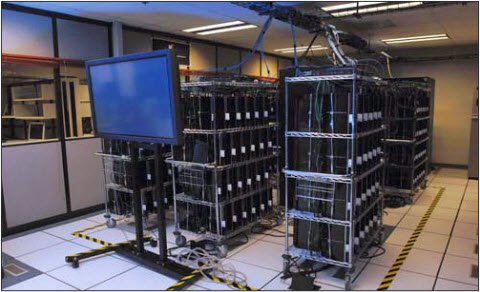 In Rome, New York located in the U.S. Air Force Research Laboratory (AFRL) resides the world’s 33rd largest supercomputer.  Created to enhance radar, pattern recognition, satellite imagery processing and artificial intelligence research, the supercomputer (known as the “Condor Cluster”) is able to perform 500 trillion floating point operations per second (TFLOPS).  This speed allows it to analyze ultra-high-resolution images at a rate of billions of pixels a minute.  What’s even more remarkable than the speed of the Condor Cluster is the fact that it’s core is made up of 1,760 PlayStation 3 systems.

The Condor Cluster project began in 2006 when PS3s sold for $400; comparable technology at the time would have cost close to $10,000 per unit.  In the end the total cost of the core reached around $2 million which is about 5-10% of the overall cost of a similar supercomputer built with off the shelf computer parts.  Lower cost isn’t the only advantage the Condor Cluster has, it also uses 90% less energy than other equivalent supercomputers.

Game Director of God of War and Creative Director of GoW II, David Jaffe, had very different plans for God of War III.  According to an interview with GameTrailers, Jaffe revealed that he had intended for GoW III to end with Kratos’ actions leading to the birth of monotheism.

Jaffe explains that he wanted Kratos to square off against Zeus right off the bat; the death of Zeus would then cause an imbalance of power between the Greek pantheon and gods from other religions.  This event would set up a power struggle between the Greek gods and the gods from Norse and Egyptian mythology.  In addition to this, Jaffe wanted Kratos to meet his Norse and Egyptian counterparts who would help him defeat the gods from their respective religions.

In the end, after defeating all the gods that come his way, Kratos would then take his life in order to join his dead family.  In the final scene, the player would then take control of the three wise men who are following the north star.

While appearing on the PlayStation Blogcast, Shuhei Yoshida (president of SCE Worldwide Studios) mentioned that certain features within the two games Dark Souls and Demon’s Souls helped influence the ultimate design of the PS4.

“Lots of things Demon’s Souls and Dark Souls did, like leaving the message to other people asynchronously – so if you were connected, but not connected at the same time – all these things inspired us when we were designing the system features for PS4…  The sharing features, I enjoy so much watching people playing Dark Souls on YouTube.  This game is perfect to learn from other players how to attack the same situations with very different strategy.”  – Shuhei Yoshida

Presumably, Yoshida is referring to the integrated Twitch, game capture and image sharing features present in the PS4.

Microsoft Included Hidden Mini-Games in Their Programs Until 2002

In the past Microsoft would include easter eggs in many of it’s programs, some of these easter eggs would include interesting mini games.  These games included a doom like hidden minigame called Hall of tortured souls found in Excel 95, a pinball game found in word 97,  a flight simulator in excel 97, and a 3-d game similar to spy hunter called dev hunter in excel 2000.  Microsoft formally stopped including Easter eggs in its programs as part of its Trustworthy Computing Initiative in 2002.