Baseball season has finally arrived and with it comes another entry in the MLB: The Show series. In our opinion, this is the best way to celebrate the love of the game and this year’s entry lives up to the hype. This year’s The Show is much what you would expect if you’ve played a previous entry in the series with a few added features to spice things up. If you want to play a baseball game, you come to the PlayStation brand and you play The Show. There are no ifs, ands or buts, your trip to the majors goes through PlayStation, but luckily, it is a great experience and a great reason to get a PS4. 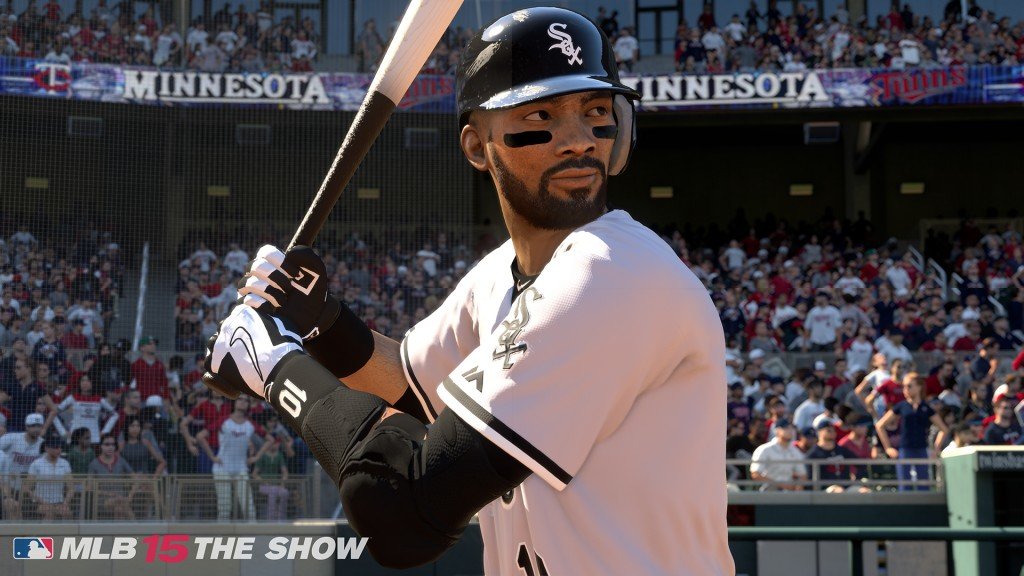 If you’ve played this game before, you’d probably recall that the first MLB: The Show on the PlayStation 4 too closely resembled the PlayStation 3 version of the game. The textures looked a little smoother on the newer console, but it didn’t really stand out on its own. This year things are different since the PS4 version of the game looks great and vastly improved over last year’s edition. The lighting system has been tweaked and casts a much more realistic shadow on the players and the environment. It doesn’t seem like lighting could make a big difference, but it does. In addition, the team has tweaked the color rendering which pulled new colors into the games from actual MLB footage. In the past, the game didn’t use the exact colors for the grass and the stadiums themselves but rather chose from a color palate that approximated them. This year, every field and every detail has been color matched from the real thing adding another layer of realism. Even the players themselves has their own skin tone which looks great in the game. It is a subtle difference, but it really does look great this year.

If the color palate upgrades didn’t impress, than surely some of the extensive stadium upgrades will impress you. This year, the development team finally rendered the press boxes and completely redid all the stadium backdrops optimizing them for the new console. This ensures that every stadium is full rendered and looks its best while having more access to the power of the PlayStation 4. The stadiums look great and it gives you that sense of awe, especially if you’ve been playing in minor league stadiums for a while. The upgrades look amazing and this is the first time the game looks like how we’ve pictured it in our heads all along. 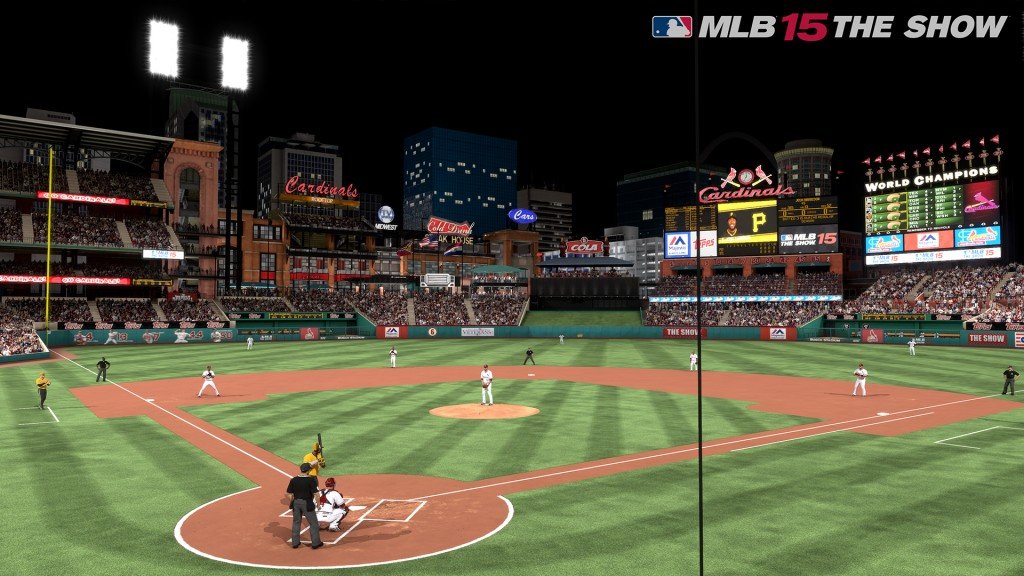 Visual improvements aside, the game has also updated many of the old assets from the previous game. Things like pitching animations, gameplay and fielding animations and even batting stances and pitching motions have been improved upon. While these updates may not always increase the immersion of the game, it helps the game stand out among the previous few games and gives it a fresh feeling. You won’t have to worry about seeing the same animations over and over again, in MLB 15: The Show, everything looks new and with several animations for the same actions, it will take a while before you start to repeat. Again, this doesn’t add much to immersion, but if you’ve played a lot of The Show, it is good to know you have some variety year-over-year and even game-after-game.

Most gamers probably expected that the graphics and gameplay have been updated, but there are some completely new features to the franchise in this game. For the first time ever, licensed equipment appears in the game. Throughout the course of your time with The Show, you will unlock certain licensed equipment which add to your stats if you are playing through Road to the Show (RTTS). Whether you want to play with a Louisville Slugger bat or try out a new Wilson glove, you’ll be able to pick your favorite brands and help your club make money with the licensing deals. It is a small addition to the game, but it adds another layer of realism while giving your RTTS player and edge if you’ve been having trouble making it to the bigs. 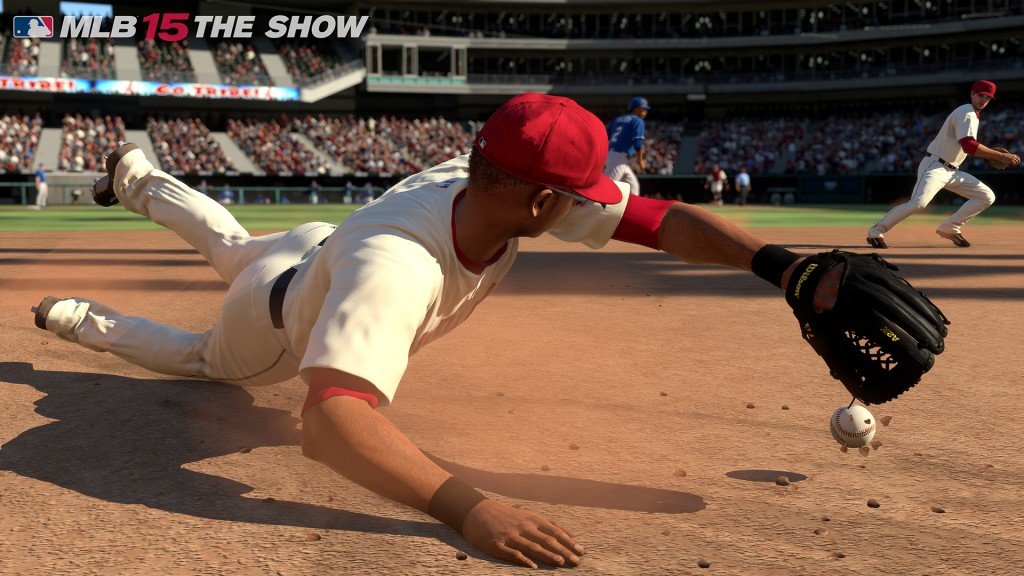 MLB 15: The Show wanted to add new rewards to keep players playing the game for as long as possible. One way they achieved this is by awarding you baseball cards while you play. These cards can be redeemed in the Diamond Dynasty Mode which is very similar to FIFA Ultimate Team. Each card you unlock allows you to add that player to your virtual roster. You can then take your team online or play against the computer in an attempt to earn in-game currency to unlock new and better cards. For the team building fanatic, or those just looking to create their fantasy lineup, this mode helps to add some variety to the game’s online offerings.

Another new feature is directional hitting. When you are up to bat, before the opponent throws the ball, you can influence where you are going to hit the ball by moving the stick in the direction you want to influence. For example, you can move the stick to the right to increase your chances of hitting the ball to right field. The system is very easy to use and adds a new element to mastering batting. It lets you play into your players strengths and it gives you a better chance to hit the ball wherever you want to hit the ball rather than where the game thinks you should hit the ball. While the system’s effects are difficult to calculate from one situation to the next, it does give you the ability to guess where a pitch is going and makes sure you make good contact when you guess correctly. It is an interesting system to play with and a welcomed addition to the game. 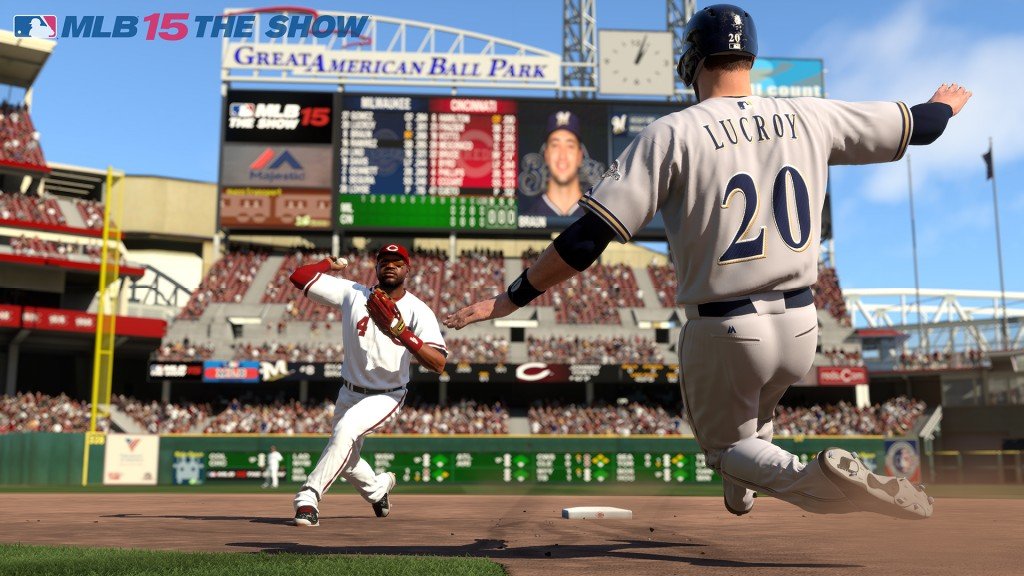 As you can tell, MLB 15: The Show added a ton of new features and even more tweaks that make MLB 15: The Show a must own for baseball fans. However, for as great as the game is, there are a few issues which make the game a little less than a perfect game. If you’ve played The Show before, you know that the online modes of the game feel a little vanilla and unfortunately, this year’s game suffers from the same fate. Sure, the Diamond Dynasty mode is a step in the right direction, but this mode is something we’ve seen before. It would have been stronger to see some kind of story element strung through the game to make things more interesting. We all love to play the “What if” game and piece together a decent roster, but how much better would it be to have the narrators hype up the team’s chances of making the playoffs or give a Sports Center style highlight reel and convey some real commentary on the team? That would be far more exciting than just butting heads with the next online opponent.

The other issue is with the load times for online play. Last year, the game just suffered through some pretty tough load times throughout the whole game. This year, the game runs reasonably well when playing offline, however, once you move the game online, things slow down tremendously. This could be made worse by a poor match-making system or just lack of players, but whatever it is, you can be waiting a long time to play a game online. This is by no means game-breaking, and you can still play head-to-head quickly, it is just playing a random opponent has some challenges to it right out of the gate. 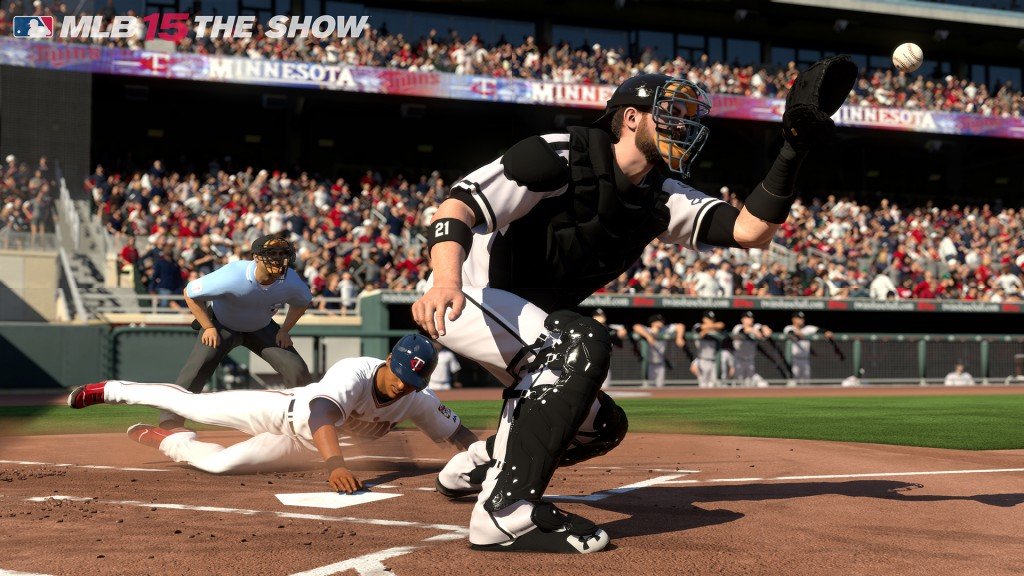 Overall, MLB 15: The Show is a beautiful game that really does feel better than its ever been. You got your standard visual and mechanical updates that give the game a fresh coat of paint. However, the developers went back to the drawing board on a few items and helped make this game feel more like a game that was designed for the PS4 and less like one that was ported from an older system. If you have any interest in baseball or just want to play one of the finest baseball games ever made, you should look no further than MLB 15: The Show. You just can’t get a better sport simulator than this.

This review is based on a review copy of the PlayStation 4 version of MLB 15: The Show published by Sony Computer Entertainment of America. PlayStation 3 and Vita versions were provided for reference.

Did you like this? Share it:
Take Me Out to the Ball Game | MLB 15: The Show Review
Overall Score8
Positives
Negatives
8Overall Score
Reader Rating: (0 Votes)
0.0