Introversion Software’s Prison Architect was released on PC platforms late last year and now by way of Double Eleven Limited it is has made its way to consoles. Despite all of the transitions not being as smooth as they would have hoped whether it be searching prisoners for contraband, sending in riot police to stop a riot or setting up programs to teach your prisoners general education, the deep mechanics that Prison Architect boasts will have you genuinely hooked as you strive to build a sprawling and successful prison. 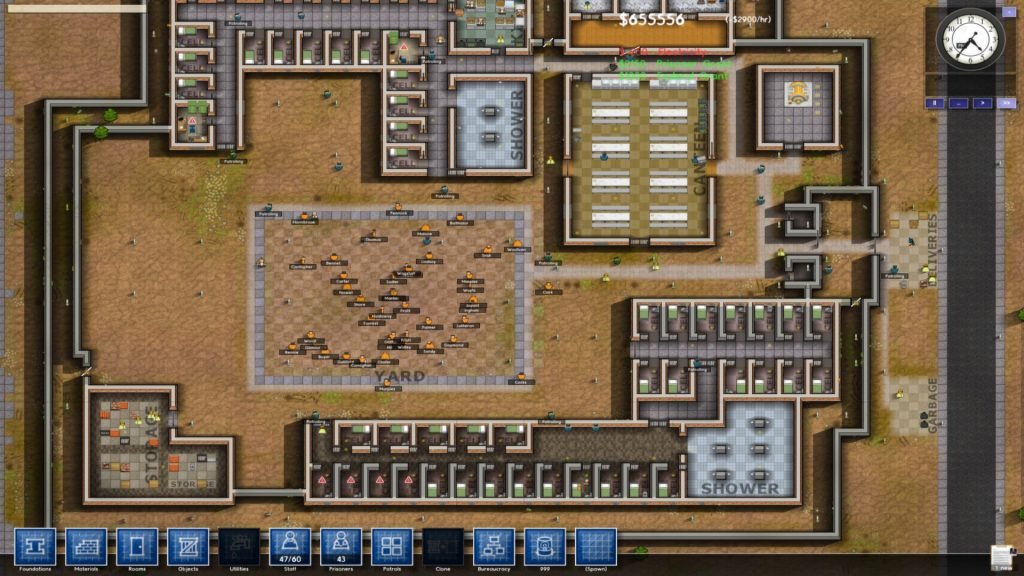 Almost everything you can think of that is involved in running a prison is probably look at in some shape or another, requesting grants from the government at the promise you will better your prison in certain ways, improving the bureaucracy in all aspects of your prison, from medical to law, education to security. Everything from riots, fires, contraband, gangs, tunnels, violence, and execution are all present as you try and juggle between being the good guy and trying to do what is best for your prisoners by putting on classes to help better their education or release them from the grip of drugs or alcoholism, and being the bad guy when ruling with an iron fist is needed when gangs, riots, and violence break out. Prison Architect really has it all and balancing all of these potential issues can mean determine the success or failure of your prison.

The many deep and intricate systems and mechanics that are at the heart of Prison Architect and learned by playing the Prison Stories mode, which acts as both a campaigns of sorts along with a tutorial. Over the course of 5 different situations, you will slowly learn your way around the basic mechanics allowing it all to come together in the last Prison Story where you will put everything to the test and build your first prison from the ground up. During these 5 chapters, small stories are told to give excuse for learning new mechanics. An overarching story is woven together between the 5 stories, although ultimately with the stories not being all that gripping, it seems a bit of an odd choice to implement into a numbers and mechanics heavy simulation game. 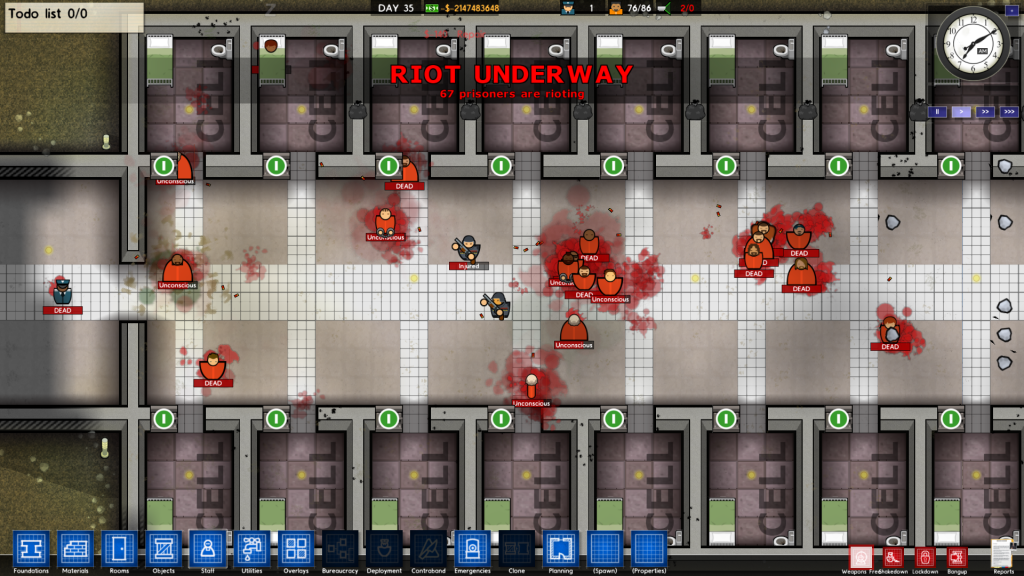 After completing Prison Stories there are two other game modes for you to dive into, Prison Warden mode where you will step in as Warden to an already existing Prison and either help it back on its feet or help an already successful prison, flourish. Prison Warden mode allows you to step into a large variety of prison, each with unique builds and circumstances, however, especially with some of the earlier prisons, the spaces don’t give you much of an opportunity to stamp your mark on the established prison, usually due to space restrictions.

Prison Architect mode is where my newfound skills really thrived, building a completely new prison from the ground up, challenges all facets that you have learned so far. Accepting grants from the government are used to earn extra money for your prison by building basic prison needs such as security, medical, and some kitchens. Despite learning a lot of the systems and mechanics during the Prison Stories section of the game there was still a lot of aspects that I knew next to nothing about. So learning on the fly was paramount and when I started to have prisoners digging tunnels to freedom I really had to test my wits to try and stop them and even if I couldn’t remove the tunnels to restore my prison back into its secure former glory. 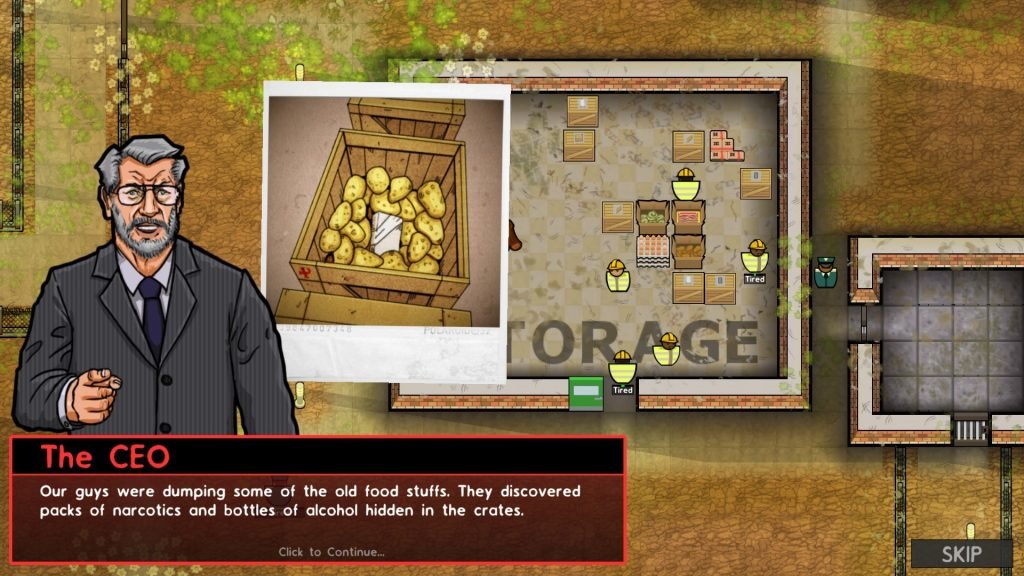 As your prison begins to build in size, upwards of 100 prisoners, the stability of the prison starts to become a little harder to juggle, you will need to hire a large number of staff such as guards, janitors and cooks, as well as build bigger kitchens and canteens. There are so many intricate details that go into making sure that your prison runs smoothly. If you don’t stay on top of things and situations start to get out of hand, and trust me they will on your first couple of prisons, all hell starts to break loose. Anything from gangs taking over parts of your prison, forcing you to respond with armed guards, or full-blown prison riots obliging you to send in riot police to restore order and paramedics to help the injured or dead. I even had times where a prisoner would kill their teacher during a foundation education program I had put in place to help better my prisoners.

Prison Architect is really at home on mouse and keyboard and although the transition over to a controller is a valiant effort, there are some aspects that definitely slipped a little. In a game where space management and specific sizing can be incredibly important, the accuracy of the mouse is hard to match making it feel quite clunky on the controller. The menu systems could also use a bit of streamlining, with a deep sim such as this, with so many systems and mechanics in place, I wasted so much time sifting through the menus, trying to find a specific thing. Even after many hours of play I still found myself getting lost amongst the less traveled menus. 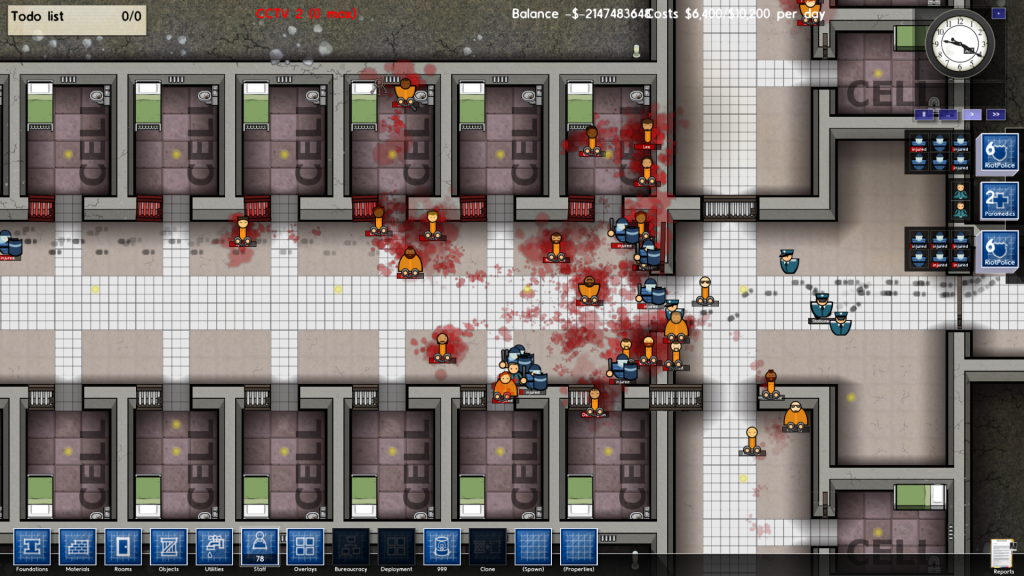 Prison Architect is a deep city-building simulator, despite the transition to consoles feeling a little clunkier than its PC counterpart, Prison Architect is an addictive game that eases you into its systems with Prison Stories mode and then challenges you to master it with the real Prison Architect mode. Here is a game that I will be going back to over and over again to test myself to build a sprawling fully-functioning prison knowing full well that at any moment the wheels could fall off.

This review is based off a retail copy of the Playstation 4 version of The Prison Architect: PlayStation 4 Edition published by and originally developed by Introversion Software and ported by Double Eleven Limited.