The names are the same, but this isn’t your typical Final Fantasy. Ultima isn’t a spell anymore, but a gigantic bomb that’s a metaphor for nuclear weapons. Summons, much like modern battleships, are arranged into Ifrit-class, Shiva-class, and Golem-class. Magic isn’t cast, it’s “deployed” and children fight wars at the whim of politicians. Post-battle looting is no longer a lighthearted laugh about why dead wolves have money on them. Now, corpses explode in a shower of blood when you rip their souls out.

Most people probably bought FF Type-0 HD for the demo of Final Fantasy XV, subtitled Episode Duscae. It’s a brilliant marketing move, for sure: bundle an obscure HD port of a Japan-only title with the first gameplay of one of the most anticipated games of the decade. The move worked, though, and it put FF Type-0 into the hands of many otherwise uninterested gamers. Myself included. 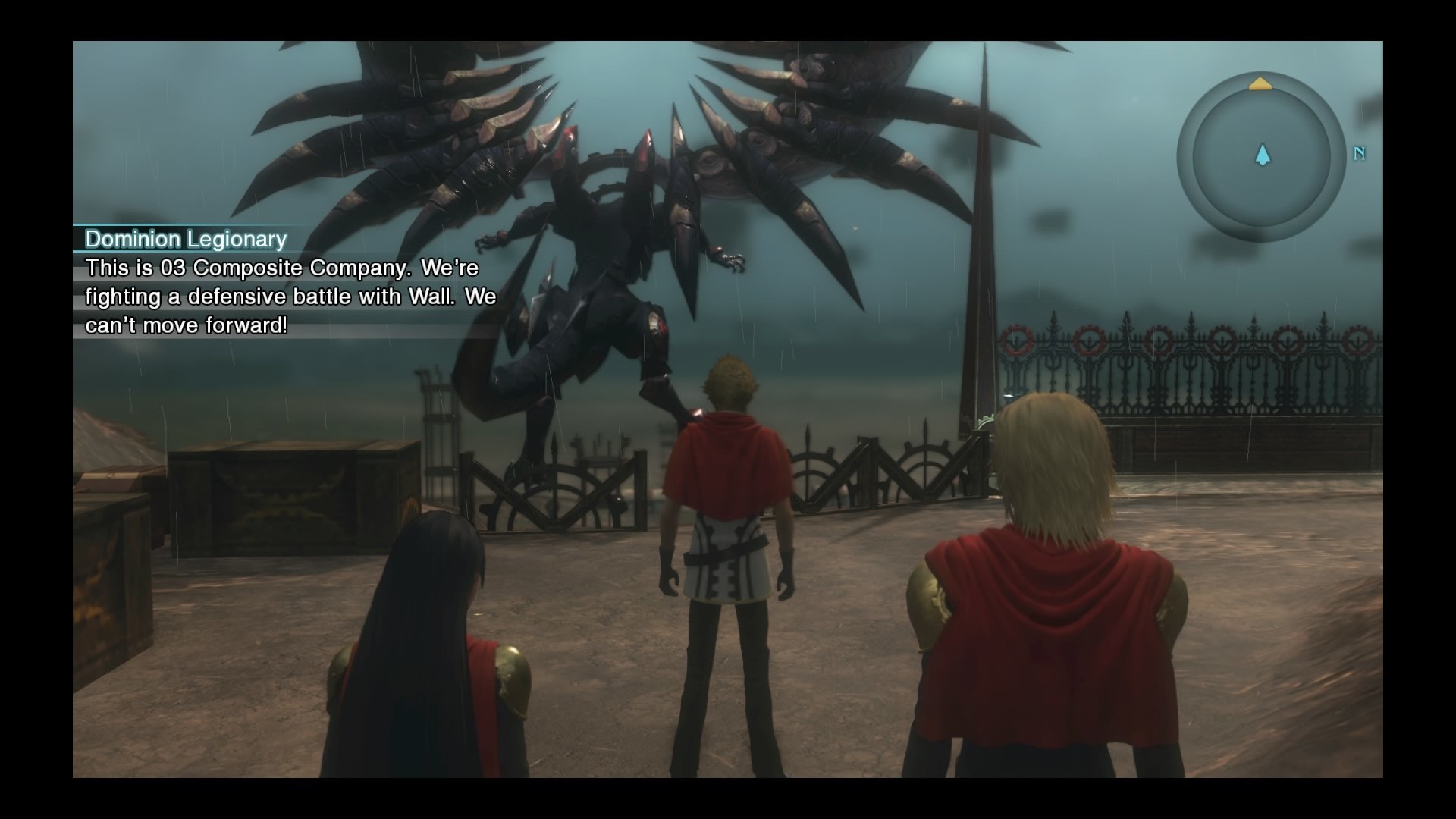 The game opens with an armored chocobo bleeding to death in the streets of a burning city. Its rider dies a slow, painful death at the hands of masked soldiers and their guns. FF Type-0 starts pretty dark, and only gets darker. Square Enix went all-in on this violent, mature exploration of war. Cutscenes routinely show groups of soldiers and civilians shot, stabbed, crushed, and vaporized by weapons both mechanical and magical.

Square Enix doesn’t shy away from the less bombastic elements of war, either. Players visit other locales as Class 0 slowly liberates their country of Rubrum. These cities are all partly-destroyed from battle. NPCs lament the destruction of their homes, landmarks, and cultures. Class 0 and the other young cadets ponder the moral implications of war and the notion of marching off to die for one’s country. FF Type-0 pays a surprising amount of attention to details that other games gloss over in the whirlwind between action sequences.

Speaking of action, FF Type-0 is no slouch in the gameplay department. Combat starts fast and the difficulty ramps quickly. Enemies are numerous, merciless, and fast. Fights are focused on dodging and precise timing, thanks to the game’s “killsight” and “breaksight” additions.

Most enemies have a certain window in their animations where they will be circled by a red or yellow reticle, respectively. In these moments of vulnerability, players can attack to either kill the enemy instantly (killsight) or deal massive damage (breaksight). Even the biggest enemies and bosses have these windows, so FF Type-0 rewards nimble players that pay attention to the patterns and behaviors of their foes. 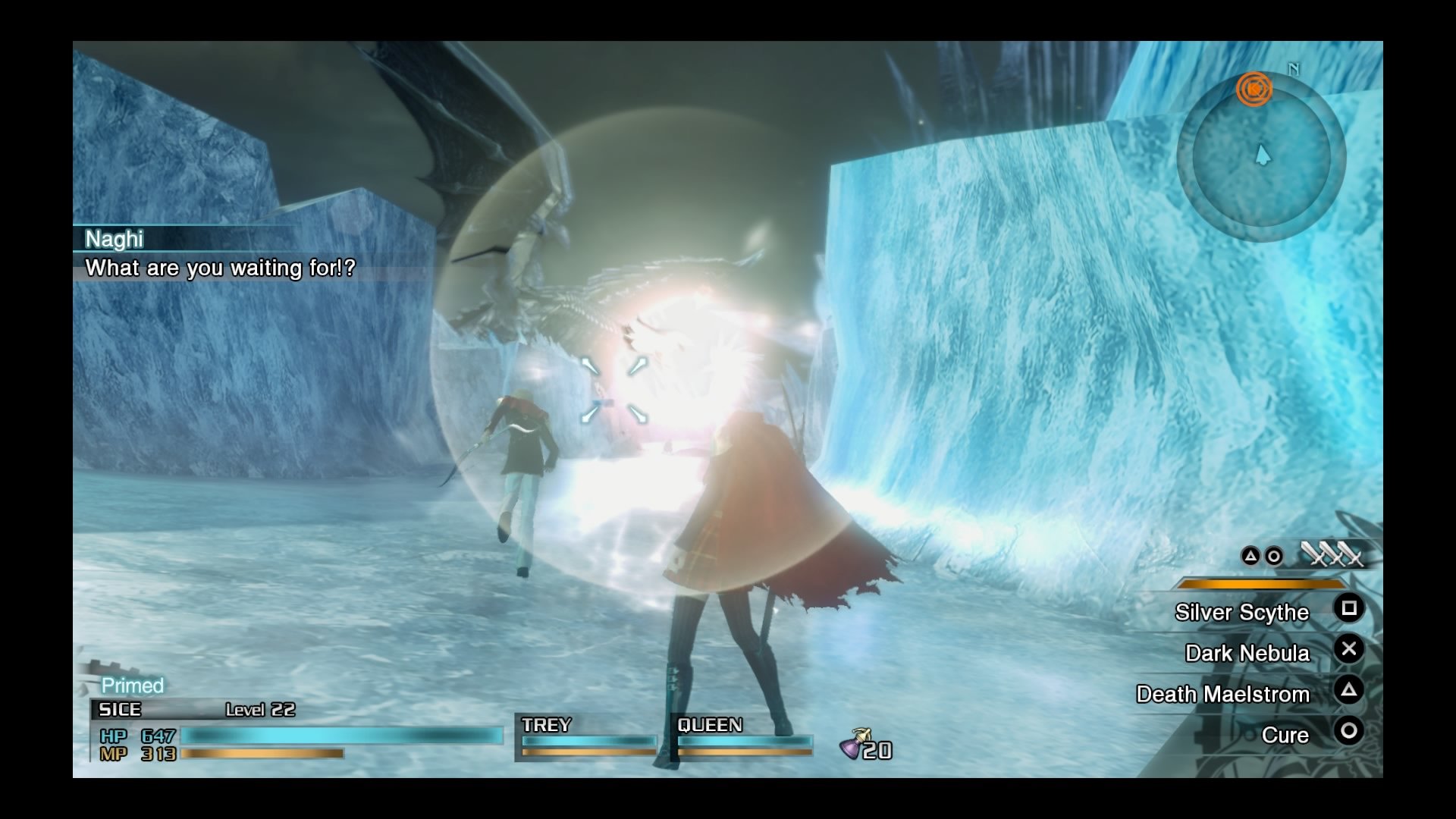 Combat is also kept fresh by the cast of 14 (yes, 14) playable characters. Each one has a unique set of skills, stats, and weapons. The options are pretty varied: King has dual revolvers, Cinque has a giant mace, and Deuce has a buffing flute, for instance. Each character plays differently, and there’s something for everyone. Players are also forced to diversify because of the wide variety of enemy types and weaknesses. Some enemies, like hovering drones, need to be taken out with a ranged character. Foot soldiers are better handled with quick melee characters that can dodge their gunfire. Other monsters can only be toppled by using a spellcaster.

I bounced from character to character, each one changing how I played the game. If I felt like being a mage for a few fights, I’d switch to Queen and firaga away. If I wanted to get into the thick of things, I’d go with Nine, the class’ lance-wielding jock. Some characters, like Jack and Eight, take a bit more nuance to use effectively. Each member of Class 0 is different enough that I never found much overlap in terms of play experience.

Featuring 14 playable characters obviously helps keep combat dynamic and exciting, but the narrative suffers. This massive cast is one of the reasons I found FF Type-0 to be very overwhelming at first. The initial hour is just a mess of expository cutscenes, narration, and Proper Nouns delivered at breakneck speed. It doesn’t help that the entire roster of characters is just dropped unceremoniously in your lap. These cadets aren’t introduced in any sort of cinematic or thematic way, either. They’re simply names in a list that you must take the time to familiarize yourself with. 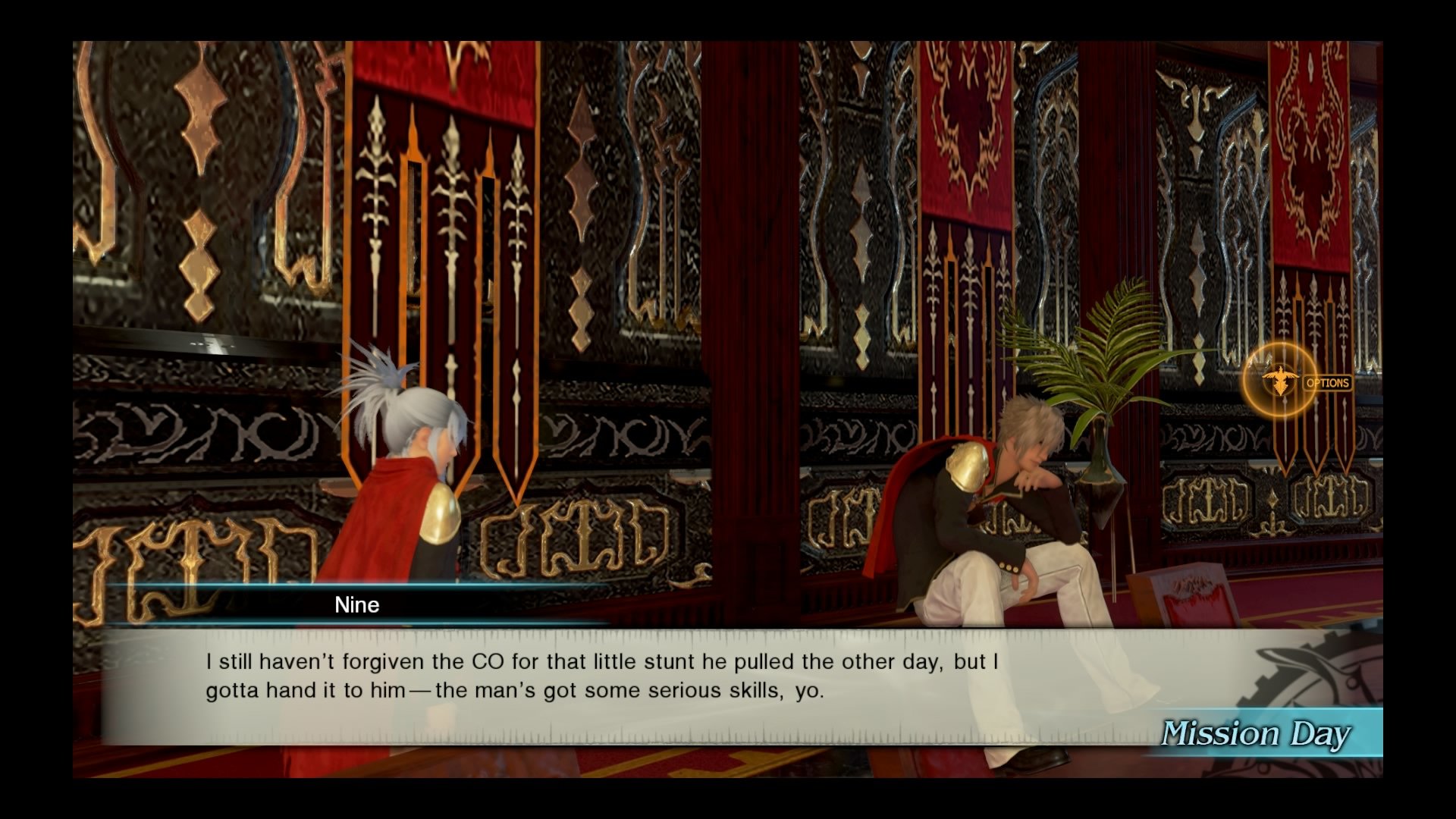 Obviously, the more characters there are, the less screen time each one gets. The story does have lead characters in Machina and Rem, two newcomers to Class 0. I rarely played as these childhood friends, so I felt disconnected to the overall story as a result. It’s paradoxical when developers give the freedom to choose from a list of seemingly equal characters, only to focus on an arbitrary two or three. I rarely saw my favorite character, Jack, in any of the cutscenes. He has no importance to the story– he’s just along for the ride. Gameplay and narrative clash instead of blend.

What’s worse is that little is done up front to differentiate these characters from one another. At first glance, they all look the same: impossibly attractive young anime people with belts, zippers, and gravity-defying hair. This is where Square Enix and character designer Tetsuya Nomura deserve credit for a rare show of subtlety. I had fun over the course of my playthrough learning the names and quirks of them all. Slowly but surely I started to notice the small idiosyncrasies in their uniforms and animations. They all indeed have “matching” school uniforms, but like real students, each one of them deviates in intricate, personal ways. Eight’s crimson cloak is tied in a knot, while Sice’s is frayed at the ends. Nine keeps his jacket open to show off those killer pecs, while Queen’s uniform is very neat and proper.

Final Fantasy Type-0 is, technically, in HD, but the folks over at HexaDrive aren’t miracle workers. There are some muddy textures along with boxy, barren environments. Character models look great in the bumped up resolution, though, along with some slick particle effects for the flashy abilities. The frame rate runs at a steady 30 pretty much the whole way through.

That said, I found myself continually impressed at the sheer ambition and scale of what Square Enix crammed onto a PsP back in 2011. The game looks great for what it is: a port of software developed for 11-year-old hardware. It’s important to note that this is a full-fledged Final Fantasy game: there are gorgeous cinematics, epic music, a sprawling overworld, side quests, optional dungeons, and some killer setpieces. 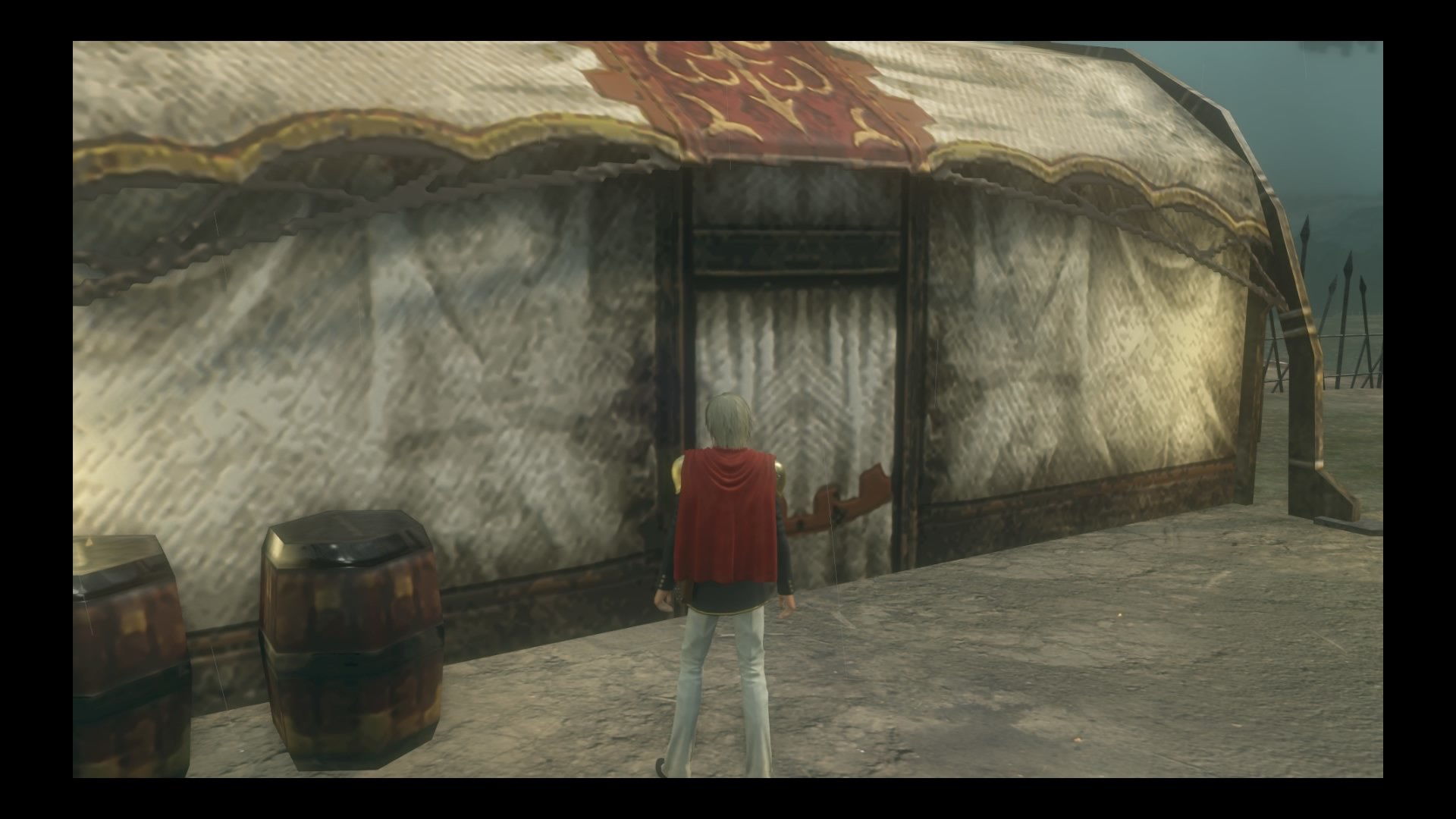 This game suffers from more than just dated textures and limited resources. The camera is the hardest enemy you’ll fight. The beast has a mind of its own, in addition to having so much motion blur that just a tap in any direction is enough to get you seasick. Like I said above, combat is fast-paced and the camera struggles to keep up. It would constantly get caught on walls and other pieces of geometry, then flip 110 degrees around me. I’d lose sight of my enemies thanks to the blurry screen and have to pull out a phoenix down.

The lock-on system is functional for the most part, thankfully. However, it breaks down when you have to loot or “harvest” dead bodies. The camera has a nasty, nasty habit of locking onto these dead bodies in the middle of hectic fights. Some of the tougher battles can be so downright punishing that one missed beat like this is enough to get you killed. Additionally, your two AI companions are pretty dim– so don’t expect too much support from them. The lack of tactical commands minimizes any larger sort of squad-based strategy that would make the combat even more layered.

Final Fantasy Type-0 HD doesn’t shy away from the RPG elements. Each character has a pretty robust skill tree with multiple passive and active skills, plus corresponding upgrades. I was disappointed that you could only equip two offensive skills at once, including attack magic. This design choice forces smart squad construction and equal leveling of all 14 cadets. All magic types can be upgraded using harvested phantoma as well. Between equipment, abilities, and accessories, there’s a lot of latitude for building up your ideal Class 0.

In between missions, players can wander about Class 0’s home base of Akademia. There’s very much a Persona-lite sort of flow to these sections. The game gives you a set amount of hours, and you can do whatever you’d like with them– like talk to fellow classmates, breed chocobos, or leave Akademia to explore the overworld. Additionally, you can sit down for classes that give all of your characters stat boosts across the board.

Final Fantasy Type-o HD is almost worth the $60 asking price. Those craving the traditional franchise experience with some fun real-time combat and a mature story don’t need to look any further. It can’t go hour-for-hour with the depth of a title like Dragon Age: Inquisition, but that was never the point. Play Type-0 HD to get excited all over again for the glorious return of the Final Fantasy franchise.

This review is based on a retail copy of Final Fantasy Type-o HD for the Playstation 4, developed by Square Enix and HexaDrive.