Sly is Finally Back

Originally developed by Sucker Punch, the Sly Cooper franchise has been an unsung hero of platforming since its inception. Unfortunately, as InFamous and its sequels gained in popularity, Sly was left by the wayside. However, Sanzaru, who were big fans of the series, stepped up to take the reins, based largely on a demo Sly level they created. They were given the task of creating The Sly Collection, an HD remaster of the previous Sly games. When this came out great, Sanzaru was given the go-ahead to begin work on Sly Cooper: Thieves in Time, the fourth installment of the series. It’s a great story; however, does it add up to a great game?

The basic premise is pretty simple: Sly Cooper is essentially an anthropomorphic Robin Hood; he is the world’s foremost thief, but only steals from the people who can afford it. He is helped along by his childhood friends, Bentley and Murray, a turtle and a hippopotamus, respectively. In this installment, pages of the Thievious Raccoonus, a book chronicling the Cooper Clan’s secret abilities, are disappearing. Bentley determines that there is a nefarious villain dancing through time, trying to erase the Cooper name from the history books. Luckily, Bentley has developed a way to transform the gang’s van into a time machine, allowing them to help Sly’s ancestors. While the story is nothing new, it is done with such a great sense of humor and wonderful writing chops that it comes off as an extremely gratifying breath of fresh air.

One of the many mini-games.

Gameplay is as varied as possible, featuring platforming, driving, side-scrolling, shooting, fighting, and rhythm, to name a bare minimum. The gameplay is even further mixed up by allowing you to play as Sly, Bentley, Murray, Carmelita, and all of Sly’s ancestors, who each have their own special set of moves. You have Galleth Cooper, who can launch himself to extreme heights, all the way to Tennessee Kid Cooper, whose cane also doubles as a gun. Taking it a step further, Sly has different costumes that he obtains in each level. Each allows him to further explore the various stages by giving him a special power. You can slow time, shoot arrows with ropes attached, or leap across huge gaps, just to name a few. On top of that, there are six different levels, ranging from prehistoric days to Medieval England, and each one has its own unique gameplay, secrets, and is absolutely gigantic. They are beautifully recognized, and give Sly 2’s incredible level design a real run for its money. Taken as a whole, it makes Thieves in Time one of the most diverse games to come around the bend for quite some time.

Of course, diversity would mean nothing if the controls didn’t let you take advantage of it. Simply put, the controls are absolutely perfect. They are easily the best I’ve seen since Super Meat Boy; tight, intuitive, fluid, and responsive. Every leap you make puts you exactly where you want it to. Landing on tightropes and spires is done with the simple press of a button, and though there are tons of different objects to latch onto, the game always seems to know where you want to be. The stealth aspects are the same as in the past; you are only spotted when you enter an enemy’s fairly small area of detection. However, the ease of sneaking around the enemies is offset by the sheer amount of them found in later levels.  The real difficulty comes in when you start trying to find the massive amount of collectibles. Each level has 30 clue bottles, which, when you obtain all of them, opens a safe, a bunch of treasure, and extremely well-hidden Sly masks. In order to find all of these, you have to take full advantage of everything that the controls have to offer. Sanzaru truly did everything they could to give you the tools you need to take on the challenges that their world tasks you with. 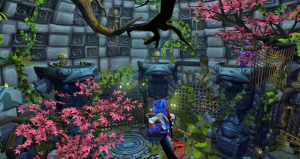 The varied gameplay and spot-on controls are supported by beautiful cel-shaded graphics. The colors are deep and rich, and every level is amazingly detailed. There’s a wide variety of enemies for every level, and each fits the theme perfectly. The Middle East stage really stands as a testament to how much care Sanzaru put into crafting the levels. The HUD is unobtrusive, but gives you everything you need to play. A simple press of the left analog stick brings up markers to show important points in the level and also puts a compass under your feet, pointing to the main objective. Also, after boss fights and at various other points, there are beautifully animated cut-scenes that will make you wonder why they haven’t made a Sly Cooper cartoon.

While Thieves in Time doesn’t do anything completely new or innovative, it doesn’t have to; what it does, it does absolutely perfectly. From flawless controls to rampant diversity, Sanzaru shows that they are more than capable of handling this beloved franchise. At $40, this game is an incredible buy, especially considering that you get a free Vita version with the purchase of a PS3 version. Considering the price and quality of Thieves in Time, I cannot recommend this game enough. This is platforming at its best, and I can only hope that we get more soon.

This review was based on a retail copy of the PlayStation 3 version of Sly Cooper: Thieves in Time, developed by Sanzaru Games and published by Sony Computer Entertainment.