It makes sense that Ascendance is the most vertical-focused DLC from Call of Duty yet. Vertical combat can be iffy when used incorrectly. It can often leave plenty of openings and unfair advantage points. The sight-lines double (at least) and many more factors need to be considered when building a level. Ascendance has outdone itself in this regard, but then you also get a new two-in-one weapon, an entire playlist focused on using the grapple ability from the campaign, and a large zombies’ map with more unique zombies, survivors to rescue, and special magnetic gun to unlock. Needless to say, Ascendance brings a lot to the table.

First off, the new weapon called the OHM Werewolf Custom Variant is a two-in-one LMG and Shotgun. Clearly it’s for the heavy hitters out there that prefer high firepower and damage dealers. It’s also everything I ever hate in a weapon, but that’s just me being bias. The LMG fires directed energy (laser bullets) and can deal pretty great damage through walls. The shotgun is automatic so you can hold that trigger down to unleash hell. I haven’t run into too much trouble playing against this weapon yet, but I can easily see weapon being abused soon. 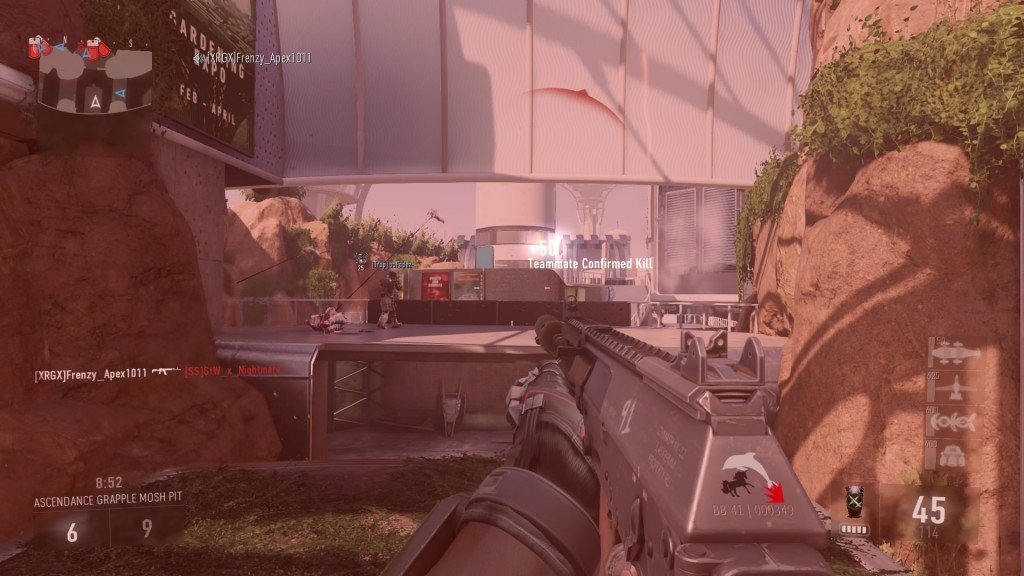 Jumping right into it we’ll talk about my least favorite map: Climate. It may be my least favorite, but I still really like it. It’s a medium sized circular map that has a central focus with one lane around the rim of the map. You can stick to the outside and fight down a single lane, or go in the center where you can fight across the whole map. It really allows for all play styles. The circular setup helps create distance when you need it, but you’re still always close to the action. Halfway through the fight the water on the level will turn toxic. Not a major hindrance by any means, but it forces you to be a little careful with all your exo-boosting.

Site 244 takes place at the bottom of Mt. Rushmore where an Alien ship has crash landed. No clue where the alien factor plays into Advanced Warfare, but it doesn’t really matter. This is a classic style rectangular map providing three long lanes. The inside of the ship gives close-quarters combat, but the two outside lanes cater to long-range fighting. The site lines may be long, but not unfairly so, and I never felt trapped or spawned camped from across the map .The special scoresteak is an alien spore that enhances your perks and exoskeleton abilities.

Chop Shop is a small rectangular map that is incredibly fast-paced. There are plenty of rooms and windows to dart in and out of. Standing in the right window will allow you some decent distance if you prefer sniping, but this map is all about your swiftest loadouts. Chop Shop is officially one of my favorite maps in all of Advanced Warfare now since I love playing with fast loadouts. Fighting down corridors and hopping through a window to escape a purist is a blast. You can earn a special skill streak that will give you a Repulsion turret that will help you lock down important areas (like the Guardian from Black Ops II).

My favorite map is Perplex and it is the most vertical map yet. A stack of modern styled buildings feel like eschewed Lego pieces thrown together. You can go in some buildings but most of the fighting takes place going up and down the outsides of them. You are constantly fighting your way up or diving down to attack. You get a lot of Dogfight medals and game modes like Domination and Hardpoint are a riot. Some apartments will move midway through the match, changing the layout a bit, but nothing major. Really, Perplex is so much fun because of the added grapple feature.

In Advanced Warfare’s campaign your character sometimes had a grapple hook to help him reach areas. That has been added in multiplayer and makes the fastest Call of Duty even faster. I was surprised by the sheer amount of surfaces you can use it with. I figured it would give you a couple options with some ledges, but you can use it almost anywhere. You can even use it on the ground to move faster, which is a huge help in game modes like Uplink. Once I played the Grapple Playlist, I never played anything else. It made Call of Duty feel brand new as each game mode and map felt different. This grapple is enough of a reason alone to purchase Ascendance. It’s that much fun.

The second installment of the zombies’ mode continues the story of the four survivors no one cares about. Overal, Zombies is more or less the same. You start with only a pistol and must find the Exosuit to really start playing. You can do the usual upgrades and unlocks, but there are some substantial differences. Mainly, Burger Town is a huge map. There are wide open spaces on the surface, and then you can go into the sewers as well.  I’m use to it now, but when I first started play it was overwhelming. Many zombies have small areas and tight spaces, but Burger Town has wide open areas, and you’ll need them.

The other main differences are the giant zombies called Goliath Exo Zombies. If being big and fast wasn’t enough, he likes to shoot out these EMP missile rockets and wield a giant hammer to squash you with. He’s a frightening beast that’s best thought of as a boss every ten levels or so. He’s tough, but nothing close to the bosses in Extinction mode. Still, it’s a nice change of pace instead of the typical larger swarm being thrown at you each round.

Infection introduces survivors to give another added element to some levels. Every now and then a survivor will be located. You have to escort them to an escape helicopter. Managing this task will earn you a weapon upgrade for whatever weapon you are currently holding. Not saving the person will cause all power to be shut off for a couple minutes. Any Zombie pro knows even a minute with the power off is deadly in later levels. 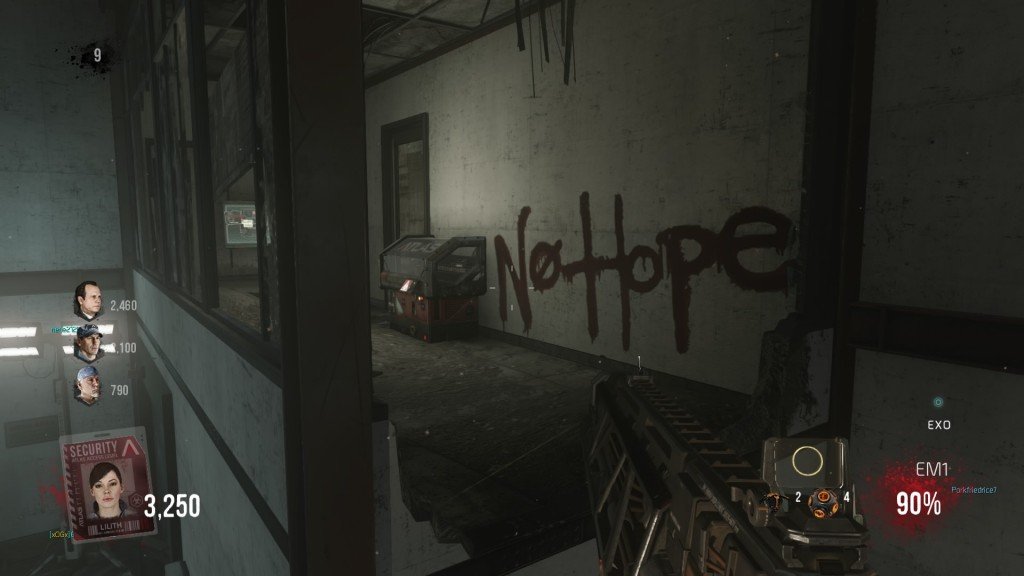 I definitely haven’t played every Call of Duty DLC, but I’ve played all the recent ones (including Ghosts’). Out of all of them this one is my favorite. I love all the levels they added and the grapple playlist really reinvents the game. It’s faster than ever and changes how you play the game modes. The Infection is better than the first episode, and lots of fun. The Goliath zombies, survivors, and large level makes it a large step up from the first episode. Normally DLCs don’t add enough to purchase unless you’re a diehard fan, but Ascendance seems to succeed in all areas. It certainly isn’t a must-buy where you absolutely can’t skip it, but if you want Advanced Warfare to feel fresh again. Ascendance does a great job.

This review is based on a retail copy of the Playstation 4 version of Call of Duty: Advanced Warfare – Ascendance DLC developed by Sledgehammer and distributed by Activision.