Any video game and baseball fan knows that if you want a serious baseball game, you look to the MLB: The Show franchise. This series has been a staple in the sports-simulation genre for years, but this year, the franchise makes its debut on the new Playstation Vita. Now you can take all the baseball action with you wherever you go; even more revolutionary, though, is the ability to play the same saved game on either console. MLB 12: The Show is the best 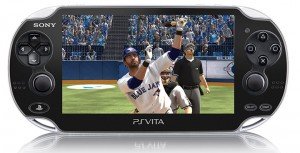 New Gamer Nation has already reviewed the Playstation 3 version of this game, and the Playstation Vita version is essentially the same game. However, there are a number of key differences we will highlight for you, just so you know what you are getting into.

Of course, the most significant feature of both the Playstation Vita and the Playstation 3 versions is the ability to play the same game on either console. It doesn’t matter which console you start or finish with, the gameplay is exactly the same, and you can start or stop whenever you’d like. All you need is access to the cloud, and you can save and download as many times as you’d like. This is a truly unique feature, and the fact that a console experience can be expanded to a portable console is a wonderful feature. 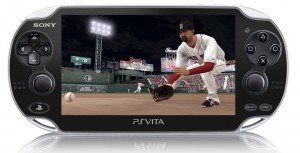 The Playstation Vita version of this game includes many of the same features as its Playstation 3 counterpart. The physics engine is exactly the same, and you can expect a similar feel on either console. “Zone Analog Batting” and “Pulse Pitching” were also implemented, which allow the Vita version to provide a consistent control scheme on either system. The Vita version also includes the updated franchise improvements that make the teams act more accordingly; big market teams will go for the top players, while the smaller market teams will develop players more often. Of course, the fan favorite “Road to the Show” mode is included in the Vita version and is cloud compatible, allowing you to create and train your player wherever you are. There is no denying that most of the major features make their way onto the Vita, and it is an incredibly full-featured package.

Unfortunately, there are a few minor flaws that hold this game back from being a perfect sports-simulation. There is a noticeable drop in graphics from the console to the Vita. 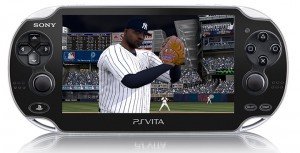 This really should be expected, especially considering the hardware limitations, but you shouldn’t think that the game is going to look identical while on the handheld. The other noticeable omission is the “Diamond Dynasty” mode. If you enjoyed creating a team and managing your players on the PS3, you won’t be able to take that aspect of the game on the go. Though this was one of the weaker modes available, it is still something to consider.

Despite its small package, MLB 12: The Show is a giant of a baseball game. The Vita version includes most of the features of the console version, and its ability to continue play from console to handheld is revolutionary. Though there were a few minor drawbacks, there wasn’t anything that should stop you from getting this game. If you enjoy baseball and you want a console-quality experience, MLB 12: The Show is a must-own game for your Vita library.

This review is based on a review copy of the Playstation Vita version of MLB 12: The Show by Sony Computer Entertainment