There’s something incredibly powerful about nostalgia. Even with the polygons and bloom lighting of today, nostalgia can make a game that looks like it was built on the NES into a top seller. Despite the move towards user-friendly games, nostalgia can make a hardcore, unforgiving platformer a critically acclaimed gem. 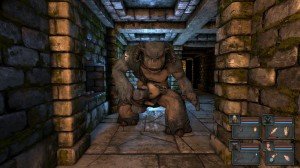 With Legend of Grimrock, Almost Human hopes to capture some of that force by reviving a long dormant genre from the early days of RPGs. And despite the sky-high bar set by the hype of rabid, old-school PC gamers and a well-timed tweet from Notch, they succeed brilliantly in capturing the essence of Dungeon Master and its peers. But better yet, they do so in a way that makes the game accessible and modern without compromising its values.

Grimrock, as most of you likely know, is a real-time, grid-based dungeon crawler, a genre with deep roots. This genre has not seen a proper, mainstream release in over a decade. Though real-time dungeon crawlers were immensely popular, they flared out quickly due to rapidly increasing technology. Dungeon Master, Eye of the Beholder, and Lands of Lore were all hailed as classics, but as games started moving towards freedom of movement, like Ultima Underworld and The Elder Scrolls: Arena, the genre was essentially left behind.

Now, Legend of Grimrock comes along to bring this style back into the forefront, but the best part is that Almost Human gets everything right: the first-person perspective, the real time click-fest battles, the wide variety of puzzles and traps, the secrets, the loot, the loneliness, and everything else. 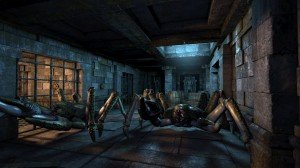 It even includes a lore-packed digital manual and official printable Grimrock graph paper. If you played and loved any of the classics mentioned above, why haven’t you bought Legend of Grimrock already? This is exactly what you’ve been waiting for, and it’s such an easy recommendation to make. But what if you haven’t dipped into Dungeon Master before? Is Grimrock still worth checking out?

You bet. Despite Grimrock‘s old-school roots, Almost Human makes the game altogether more accessible to the modern gamer. First is the graphics, which are a far cry from the pixels of yore. Every bit of the dungeon is rendered with an overarching sense of realism; it’s not necessarily AAA-grade light and sound, but there’s no cartoonish aspect to the design. The monsters are the best part, as each are beautifully animated in a very creepy way. The monsters are in your face, often lunging directly into the screen in a way that makes you jump back more than once. Just wait until you meet the now infamous spiders, and you’ll know the true meaning of fear.

The gameplay and UI are somewhat simplified, too. You control a customizable party of four, picking from four races and just three classes (though the classes have quite a few different skills and builds to pick from). These characters start as prisoners (is there any other way to start an RPG?) who are thrown into the dungeon atop Mount Grimrock. 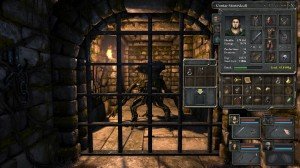 There’s no one else around besides a horde of monsters, devious traps, and a voice in your dreams encouraging you to reach the bottom. To get there, your four prisoners line up in a two-by-two grid, and march very carefully through the dungeon. If you run into a monster, you simply right-click on the weapon you want to use for each character; it hits and you wait for the character to become active to attack again. Of course, you have four characters to manage, so things can get dicey. Fortunately, you can easily get into a rhythm, and the monsters attack slow enough that digging in your inventory or stopping to cast a very complex spell is not a death sentence. There are also multiple difficulties, so if you really can’t get the hang of the combat, you can restart on a lower setting and just enjoy the puzzles.

Fighting the enemies is fun, but with the exception of a few movement-based fights, it gets routine. The main variety of the game comes from the puzzles. While there are a few duds, and just a few too many secret buttons that are always in the same place on the wall, most of the puzzles are really well-designed and require a lot of thinking. The hardest ones are optional, but they also reward you with the best loot. There are puzzles that involved riddles, tricks of the eye, quick timing, and even one brilliant one which temporarily turns the game into Pong, Grimrock style. The secret doors might stop being surprising five or six floors in, but there is a ton of endlessly creative puzzles and traps as the game goes on.

For the most part, the game is accessible, but it does skew decidedly old-school and hardcore at times. Without an active resurrection crystal nearby, death is an extremely serious issue. Status ailments can devastate an unprepared party. 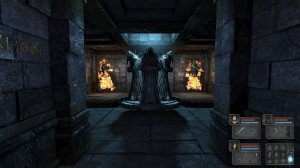 The game even includes a map-less mode if you want to try your hand at drawing your own maps on graph paper. It may be accessible to the modern gamer, but that doesn’t even remotely make it easy or forgiving.

Still, it’s an enjoyable dungeon crawl from the top to just before the bottom. The enemies are well designed, most of the puzzles are creative, and the survivalist nature of the dungeon crawl makes loot precious. The game also requires you to make hard choices and travel light. A disappointingly cheap final boss and the fact that there’s only a handful of distinct environments keeps it from perfection, but it certainly comes close. Will this bring back a whole genre of RPGs? It’s hard to say, but with a potential forthcoming map and mod editor, Legend of Grimrock could become a platform for even more old-school adventures.

Final Verdict: Though not perfect, Grimrock is a rousing success by appealing to both old-school fans of the genre and drawing in new players who are unfamiliar with the style. If this retro genre interests you, Almost Human certainly delivers on the hype.

This review is based on the Steam version of Legend of Grimrock provided by Almost Human.