With the recent re-release of the first two Dead Island games, Deep Silver has added a much smaller game to the franchise. Retro Revenge, is a side scrolling, on rails, beat em’ up that boasts fun, yet incredibly repetitive gameplay that makes it feel more like a rhythm game than the old school side-scrolling beat em’ up that I expected. Looking at the Dead Island franchise from a completely different perspective this short romp is a somewhat entertaining couple of hours but a game that I wouldn’t have bothered with if it weren’t packaged in with the meatier entries in the series. 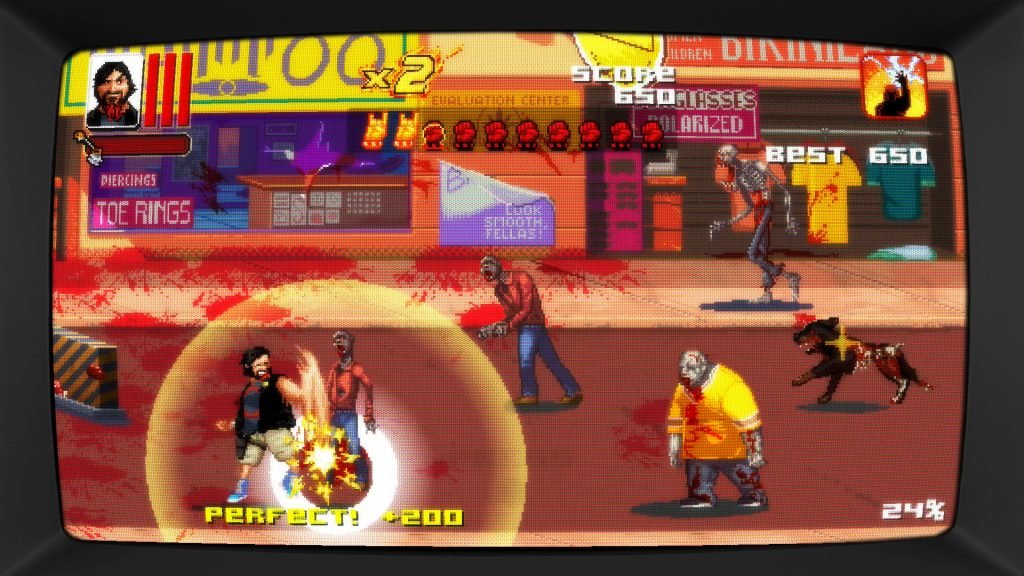 This bite size entry doesn’t waste any time with trying to weave a compelling story, basically, there are a bunch of crooks that steal your cat for some reason and you will do whatever is necessary to get it back. Even if that means taking to the undead littered streets and mowing down anything in front of you, whether that be your run of the mill zombie or machine gun-toting baddies.

Boasting a short campaign that only takes a couple of hours to complete. Each of the 24 stages consists of a 2D plane where your character is constantly moving from left to right. Moving up and down between 3 horizontal lanes, enemies and obstacles will hone in from any direction, challenging you to dodge and destroy anything in your way. Combat plays out fairly simply, your character has a hit box in front of him and each opponent has something similar. Lining both of these up and swinging away will net you a perfect hit and earn you extra points. This mechanic makes Retro Revenge feel more like a rhythm game, moving between lanes, precisely lining up each hit and stringing together perfect combos for bonus points. 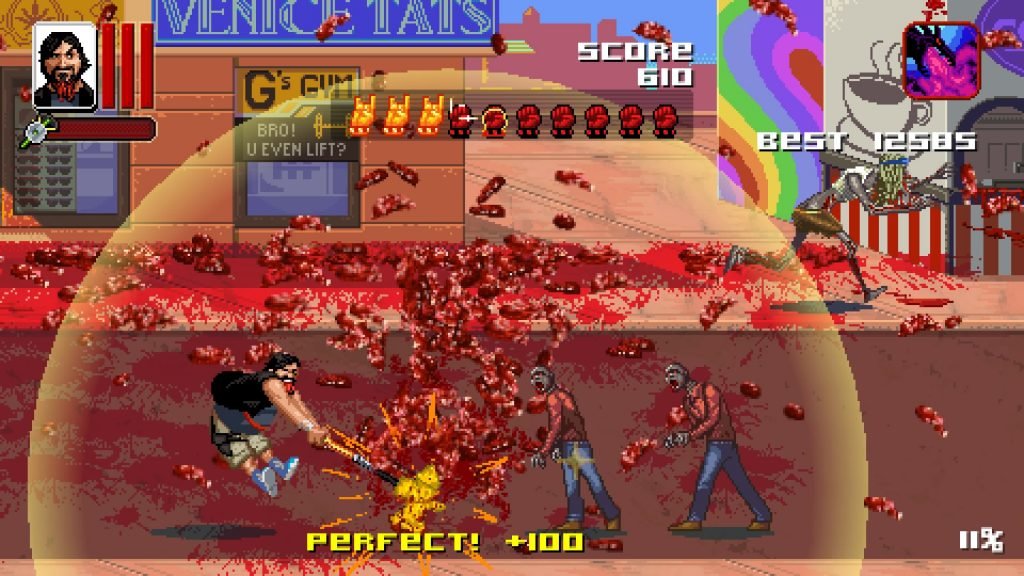 Throughout each of the levels, there are two types of crates that you can open, one offers you health and extra points, and the other unlocks a temporary stronger weapon that will destroy practically anything they touch. Each of these weapons has a much larger hitbox and therefore makes it a lot easier to gain perfects and destroy enemies. Wielding a devastating electric machete took me back to the incredibly creative weaponry of the Dead Island series.

Piecing together a string of combos and perfects will get you a high score that can unlock the ability to temporarily use your super weapon you have chosen. These weapons will destroy anything in their path. Between this and a single use magic ability that clears the battlefield in an instant, you have plenty of firepower at your disposal. If everything goes well, you can use either ability as a “get out of jail free card” to prevent yourself from dying. 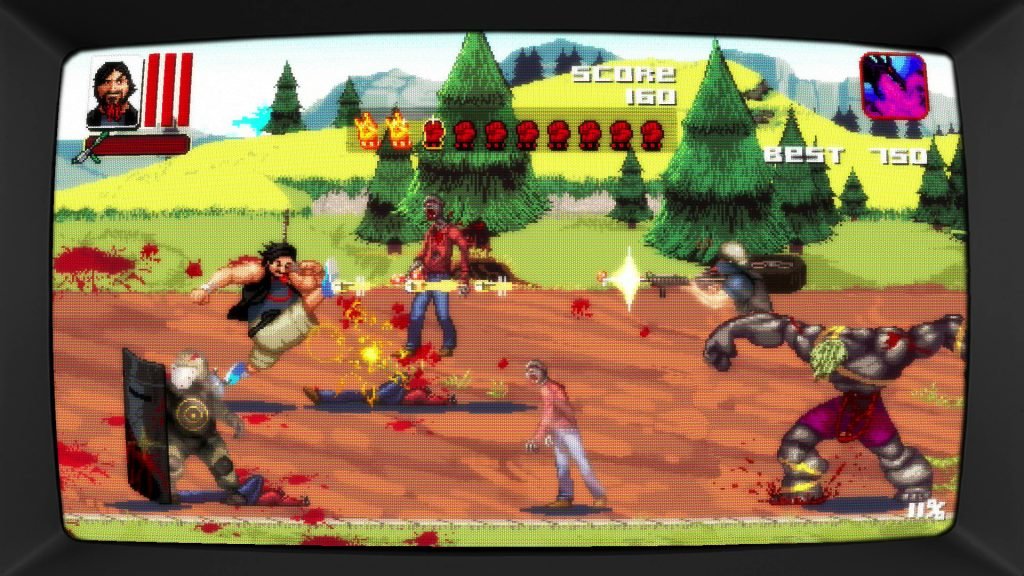 Despite Retro Revenge having a bevy of different enemies showing up throughout the 24 different levels, combat doesn’t vary between each stage a whole lot. There are 3 weapon power-ups as well as 3 different magic abilities although the weapons practically play the same and the magic abilities all give the exact same screen-clearing impact. Unfortunately, this lack of diversity between stages makes the gameplay fall into tedium faster than I would have hoped.

Once you have completed the game there are two unique gameplay modes that unlock. Marathon mode, which is just a repeat of the original game but you have to try and complete it without dying and Survivor mode, where you try and survive 1-minute waves of enemies over and over as they increasingly become more difficult for as long as possible. This extends the life of Retro Revenge almost twofold but with the actual gameplay not changing at all, you can expect nothing new with these additions.

Blasting away zombies and thugs with an electric machete, or an explosive t-shirt cannon is definitely a satisfying feeling. Stringing together perfects and combos as I hit my stride was addictive at first, although with nothing unique to distinguish between levels and gameplay that seems like it would change by introducing new weapons and magic abilities and yet doesn’t really change at all, Retro Revenge gets repetitive and boring rather quickly. As a pack-in with the other games, I would recommend giving Retro Revenge a look, even if it only takes a couple of hours to see it all.

This review is based off a retail copy of the Playstation 4 version of Dead Island: Retro Revenge developed by Empty Clip Studios and published by Deep Silver.