Given the fact that you are reading this review, it is fairly safe to assume that you agree that video games are pretty freaking awesome. When it comes to gaming, the video games themselves are certainly one of the most important things to an enjoyable gaming experience, but for me audio is a very close second. As the years go by, I find myself listening to video game sound tracks more and more and truly appreciating quality gaming audio as I sit on my comfortable couch and game for hours on end. Sure I’ve got my fantastic receiver and 5.1 setup in my man cave, but these days I can’t go blasting the audio like I used to. I still want that amazing audio experience, but I can’t risk waking my 1 year old or sleep deprived wife.  I’ve used my fair share of gaming headsets over the years, but nothing quite stands out like the Turtle Beach Elite 800. 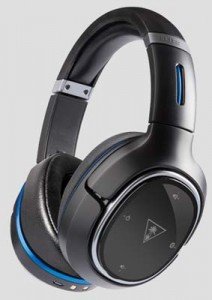 The Elite 800 is tip-top in terms of both sound quality and features. In the sound department, the headset has 50mm speakers with Neodymium magnets making it a light-weight and powerful headset. For surround sound, the transmitter for the base outputs DTS Headphone: X 7.1 which sounds immaculate in my ear drums. The headset comes with a variety of audio presets (for both game audio and microphone audio) designed for the full gamut of use cases. For chat purposes you have microphone presets for quiet, normal, and loud rooms as well as an outdoors preset. For listening audio, there are tons of presets such as signature sound, genre specific presets like racing or shooters, and gaming specific ones such as footstep focus and super human hearing.  In the microphone department, game chat is crystal clear and you can hear your own voice in the ear cups to keep you from screaming at your teammates.

Features: 10
A high-end gaming headset like the Elite 800 comes with a plethora of features. There are plenty of wireless gaming headsets on the market (albeit not nearly enough in my opinion), but the Elite 800 really stands out, most notably because of its active noise cancellation. The vast majority of headsets on the market are merely noise isolating, i.e. they merely block the sound waves reaching your ear drums. The Elite 800 has two microphones constantly listening to the ambient noise that surround you while you have the headphones on and with some signal processing invert the sound waves going back into your ears. Full disclosure, if you are expecting to simply put these headphones on and not hear anything else around you, then you would be grossly mistaken as that simply isn’t how active noise cancelling technology works. For example, I had the luxury of flying cross-country this past weekend and had a good 10 hours round-trip on the plane playing my PS Vita. The noise cancellation worked great with the constant sound of the airplane’s engine, but I could still hear the baby crying in the seat behind me. 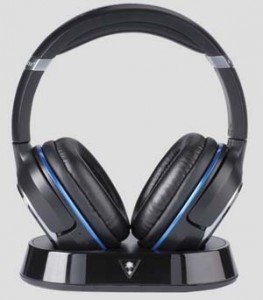 The majority of the headset’s features are available at your fingertips by pushing the buttons on the headset’s ear cups. Whether it’s pushing a button to activate a feature or the battery is about to die, a voice prompt will inform you about what is going on, making things very easy to understand.  That being said, these buttons are incredibly sensitive. Given the many features of the headset and its versatility, I began using it for far more than just gaming. I quickly noticed that whenever I put them in my backpack, the headset would inevitably turn itself on due to something in my bag bumping into it, slowly draining the battery. An Elite 800 carrying case would be the perfect solution to this problem *cough* Come on Turtle Beach *cough*. Luckily, the battery is very good as I have gone 8 hours straight and never needed to recharge. Admittedly, I never fully drained the headset on a single use as I always popped it back onto its slick magnetic base when done with it to charge, but the headset is advertised as having a 10 hour battery life and even if during a gaming marathon you do kill the battery, have no fear as you can then plug in a USB cable to charge the headset and continue gaming without delay.

The Elite 800 can also be used as either a wired or wireless headset as the situation demands. Granted the majority of users will use the headset in a wireless capacity, by connecting to the transmitter base over an 802.11a connection to provide the high quality / surround sound (used for consoles or PC) or to their mobile device via Bluetooth (for mobile applications), but sometimes you might actually want to connect using a wire. For example, going back to my weekend trip, while on the airplane I simply needed to connect the cable to the chair to watch the plane’s featured content without using the cheap headphones from the airliner.

The Bluetooth connection is especially nice as you have the ability to pair your phone to your headset while you play your games, allowing for seamless gameplay when you get a call. The Elite 800 supports dual-pairing for Bluetooth so that you can have the headset connected to two different devices simultaneously, however I noticed that the audio quality of a voice call on my cell phone suffered greatly while simultaneously connected to my PS Vita. However, I did not have this issue while connected to my consoles. 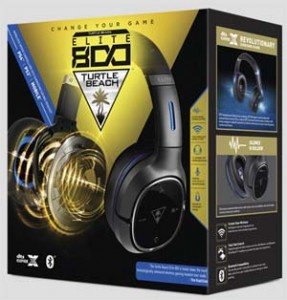 Let’s be honest. The vast majority of gamers aren’t looking to drop $299.99 on a gaming headset and while $300 certainly is on the pricey side of things given that the headset is almost as much as a PS4, you have to keep in mind that the Elite 800 is as its name implies…Elite. For that hefty price tag you get a feature-rich headset that is currently unmatched in the gaming marketplace. Not to mention that simply by purchasing the Elite 800 you automatically gain access to Turtle Beach’s Elite Membership program which gives you a 2-year warranty, a free Twitch Turbo trial membership, T-shirt, and 2 free sets of speaker plates to customize your new headset and make it your own. High quality audio gear is always going to be pricey, but in my opinion the Elite 800 is worth the investment.

Ease of Use / Comfort: 9.0
The Elite 800 can be used on any number of devices due to its standard 3.5mm jack and Bluetooth capabilities. Connecting to my PS Vita, PC, and Android phone were a breeze as the devices pair to the headset quickly. I did have some minor setbacks with getting things going using my PS3 and PS4 (due to my own stupidity) but after a quick call to Turtle Beach (which is one of the perks of the Elite Membership mentioned above)  I was up and running. I game for fairly long stretches of time and I have to admit I was a little weary when I first noticed that the ear cups were leather as I was expecting some hefty sweating going down after a few hours. But to my surprise, not only were the ear cups incredibly comfortable, I had minimal ear sweat action going down even after hours of use. The ear cups fold flat for easy packing and are adjustable allowing them to fit practically anybody’s head shape.

Overall: 9.5
Turtle Beach makes fantastic headsets for every range of a gamer’s budget. The Elite 800 is their crème de la crème and is by far the most impressive gaming headset that I have seen to date. Yes, $300 is most likely more than what the average gamer is looking to spend on a headset, but the Elite 800 isn’t your typically run-of-the-mill headset. In fact, all things considered given the versatility of the headset, its features, and quality, it’s actually very well priced compared to its competitors for non-gaming headsets. If you are looking for a top-of-the-line headset that is certain to provide an audio experience worth the money, pick up the Turtle Beach Elite 800. You won’t be disappointed.