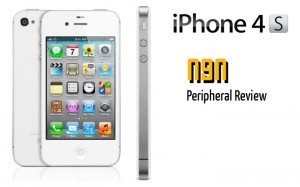 New Gamer Nation is back with our third installment of our series highlighting the gaming capabilities of smart phones.  Today, our efforts are focused on the ever popular iPhone 4S.  While this phone has been out for some time, it has only been available to contract customers.  With the iPhone 4S  recent release for prepaid only cell phone customers, both Cricket and Virgin Mobile have thrusted the iPhone 4S  back into the news.  As a reminder, our cell phone series is  solely focused on gaming and not how well the phone works on your independent service provider.

The iPhone 4S is considered by many to have the best screen in the game.  Apple’s patented retina display does offer a high resolution, which provides vibrant colors. Gamers will enjoy the strong color representation in games and the sights that it will provide for a quality gaming experience.  However, the screen is not all rainbows and lollipops.  At only 3.5 inches, the screen is considered small and outdated.  Most cell phone manufactures have moved to a standard 4.0 inch screen. In fact, there are numerous options of phones that utilize a 4.3, 4.5, and even 5.3 inch screens.  The small screen on the iPhone 4S can make gaming difficult for some of our larger handed, poor-sighted gamers.

The iPhone 4S runs on the Apple created A5 dual-core chip, which presents gamers and users with a smooth OS experience.  Games will require minimal load times and will rarely result in lag or the dreaded total reboot.  Reboots can happen, but it happens so infrequently that one will be caught off guard.  Additionally, Apple has done a fantastic job with keeping the device the same across carriers.  Whether a consumer chooses to purchase a device from a post-paid company (Verizon, AT&T, and Sprint) or from a prepaid company (Cricket, Virgin Mobile), the device remains the same.  Apple is unlike Samsung who has had a long history of slightly changing their Galaxy S series depending on the wireless provider.  Keeping the phone the same across all carriers is a great benefit for the gamer because regardless of the service provider, the device remains uniform.

The iOS platform is perfect for gamers.  There are so many choices of games for all types of gamers.  Be sure to check out our “Mobile Gaming” section under “Reviews” for plenty of iOS titles.  Perhaps the greatest aspect from the availability of games is that all developers can have the same chance for success.  Whether one is a fan of Indie games, or a fan of Major developer like EA Sports, there are plenty of options out there.

Apple is known for having some of the best battery life on all of their devices.  The iPhone 4S is no different.  The battery provides approximately eight hours of talk or use time.  Having eight hours talk time is considered well above average for most smart phones.  However, NGN could not give this mark a perfect 10 out of 10.  Reason being, the battery is not removable.  Hardcore mobile gamers will need to carry a charger, battery pack or resort to purchasing a solar powered case.

Outside of the smaller than average screen size and the zero access to the battery, the phone has many positives.  The sheer amount of games combined with a strong internal chipset, bright screen, and a powerful OS makes the phone a must purchase for the mobile gamer.