Guns, blood, and hoards of enemies. What more can any fan of a shooter ask for? In Crimsonland, gamers will get a combination of all of that but is it worth playing? Selling itself as a top-down shooter with RPG elements, we have to wonder if Crimsonland has the firepower to paint the town red or is it shooting blanks. Rally the troops it’s time for the review. 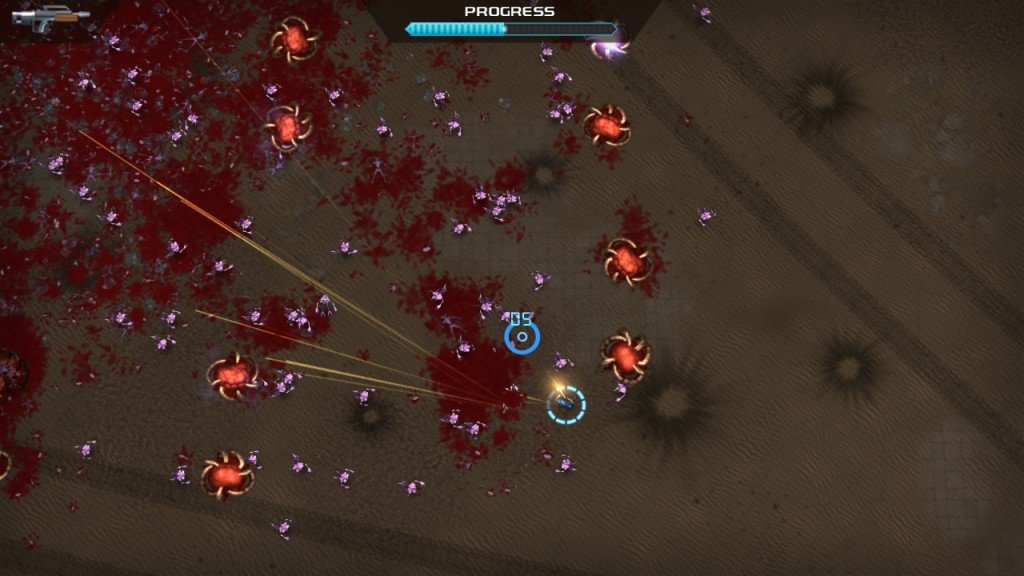 Simply put, Crimsonland is a top down shooter where the player(s) must survive a horde of enemies until the round is over. At least, that’s how things are in quest mode. In quest mode, clearing the level of every enemy on screen allows the player to advance to the next level. Enemies are kind of generic ranging from aliens, bugs, spiders, and beetles. The ones that really give the player a run for their money are the android spiders, which split into two smaller spiders, everyone with a touch of arachnophobia will have some nightmare fuel. With 60 levels the players must clear and along the way they unlock new guns, power-ups, and pickup perks for the game. After completing the quest mode on normal difficulty, harder difficulties will become unlocked as do more modes to play the game. The other modes include Rush, Survival, and Weapon Picker mode among others. Most of those are a the regular game with a twist and a final score to post. Survival is the most basic, but a continuous version of the missions in Quest. Rush only gives you one gun to survive with. Other modes such as Weapon Picker gives you a set of limited bullets and drops other guns at random. All of this just leads to the basic concept of the game…Survive or die trying.

Not too much about the game is going to blow the player away visually. As mentioned, you’ll encounter run of the mill type enemies such as aliens, zombies, and spiders. What makes the game fun is killing off a bunch of enemies to paint the floor red to survive. The sheer amount of enemies coming after you makes it necessary for the player to use the right combination of power-ups, perks, and of course the right gun. The moment you find your favorite gun in the game is something to behold. Each gun feels a little different with some offering different ranges of power, accuracy, reload time, and even a range of how wide of an area they can cover. These come in handy to know which guns do what so you know if you want to pick it up or leave it alone, depending on the situation. Then surviving makes you feel like an action movie hero taking on the lot of full of bad guys. 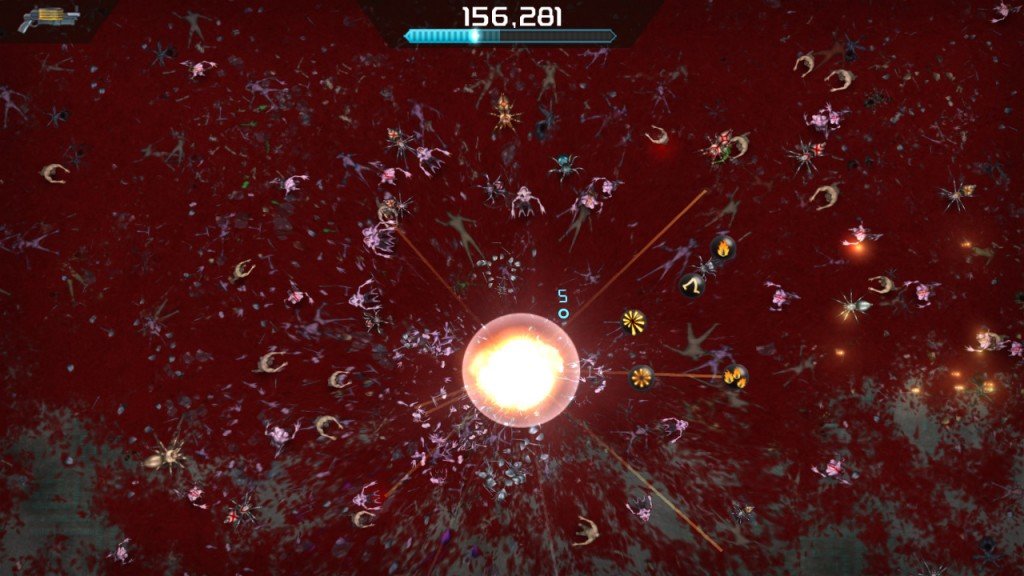 I love this freaking gun!

With each kill, the player earns experience points to use on random buffs for the round. They usually help with random things ranging to anything from faster reload times or earning XP faster. Perks pop up during the game to help the player with anything from a shield to higher powered bullets. Along with the splattering of blood on the floor with each downed enemy, Crimsonland makes for some fast paced gory action. Trying to make your way to a perk can be a tough decision at times. Can you make it to the shield or fire bullets on the floor or should you just keep holding the spot keeping enemies at bay?

One of the drawbacks of Crimsonland stems from it’s lack of online multiplayer. You can have the traditional couch co-op, however there isn’t a way to play with friends or strangers online. Though I will say, it doesn’t take too much of a difference unless you are big on online multiplayer. One thing that would push this game to a better experience would be the ability to pick the weapons you want to start off with if replaying levels or even in some of the other modes such as survival or rush. While there are a minimal amount of RPG elements, adding a few more to build up the guns or the character would go a long way in making the game a much deeper experience. This would also give some incentive to using some guns over others or even building a favorite gun to make it better. As it stands, Crimsonland is a basic and mindless top-down shooter. A lot can be put into making it a deeper experience. Unfortunately outside of unlocking more guns and perks there isn’t much of a reward system in the game.

This doesn’t make it a bad game though, because it’s still very fun to just pick up and play to shoot spiders, aliens and/or zombies. The action keeps you on your toes to find powerups to help the player survive. The sweet moment when you find your favorite gun to mow down enemies is what makes the game fun. Things get gritty when you have a ton of enemies in between you and either the gun or a perk on the ground. At the end of the day, if you are just looking for something simple to pick up and play, Crimsonland is a fun game for those gamers that are fans of the top-down shooters.

Final Verdict: Crimsonland gets 8 ion shotguns out of 10.

Did you like this? Share it:
Paint it Red | Crimsonland Review
Overall Score8
Positives
Negatives
8Overall Score
Reader Rating: (0 Votes)
0.0