After a brief hiatus and a juggling of publisher, EA Sports has officially taken over the UFC license and released the latest edition of the game simply called EA Sports UFC. Fighting fans will finally get a taste of UFC action again as EA Sports champions the franchise into the mainstream once again. With a newly updated graphic engine, updated rosters and new control mechanics, there is a lot to learn, but a lot to love. However, with a new developer at the helm, things get a little rough around the edges despite a valiant effort to deliver on fan expectations. UFC has not been around for a few years, but in that time the game has taken a number of steps forward, especially in the graphics department. The game has a different presentation this time around with updated effects and movements and it has an overall improved presentation. Especially on next gen systems, the game looks a lot better than it ever has. For fans, this new and improved visual fidelity is certainly something to get excited over. However, things go downhill from here.

Controls have always been an issue in UFC games and this year’s edition is no different. EA Sports UFC requires a lot of meter management to execute certain maneuvers. Once you start a submission hold, the right stick will apply pressure to your opponent. If you are on the receiving end of the submission, the right stick will help you defend against it. While you are in the hold, you’ll be prompted to maneuver the left stick to help gain a better position. This back and forth continues until you successfully submit your opponent, or your opponent breaks your guard and either stands up or becomes the aggressor. 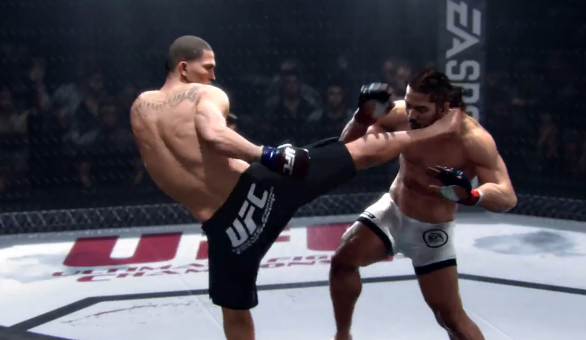 The system itself works well and is a significant improvement over earlier versions of the game. However, the game is still a major challenge in the beginning and the steepness of that learning curve will put off a lot of players in the beginning. Once you get used to the way things work, you’ll be satisfied with pulling off some of the moves you see in UFC events. But getting to that point requires a lot of patience and a willingness to take your lumps while learning the game. It is understandable that the UFC contains a lot of nuance and translating that nuance to a video game provides a number of challenges. However, the fact still remains that this is a game and requiring an education before the game gets fun is an issue.

Another issue is either the hit detection or the amount of damage that is calculated when executing certain moves. It seems to always happen that right after you land a few high-damage, well-placed kicks or punches and right after the CPU will counter with a jab which puts you on the mat. Of course in a real UFC match, there is a random element where anyone can gain the advantage by landing a good shot. However, EA Sports UFC tends to get a little too random with its calculations and even the lightest, low-damage shots, that would never change the tide of a real fight, can end the virtual match quite often.

Freezing and glitching happens a lot in gaming and some games are worse than others. However, EA Sports UFC freezes at least once or twice per gaming session. The game feels unstable and even though there are many advanced technologies at work here, the performance still tends to suffer from time to time. In addition to performance issues, there is quite a bit of clipping and glitching issues that still plague the game to date. Granted, you aren’t always guaranteed to see these issues in any given gaming sessions, but give the game enough time and you’ll encounter it. These technical issues hurt the overall presentation of the game and left room for doubt.

While things may seem all doom and gloom, there are several things that make this one of the best UFC games so far. This game features a huge roster of fighters from current superstars to retired hall of fame fighters. They also included the women’s division which is a welcomed addition to the game. Playing as your favorite fighters is why most people would buy the game, but this isn’t even the best feature of the game. 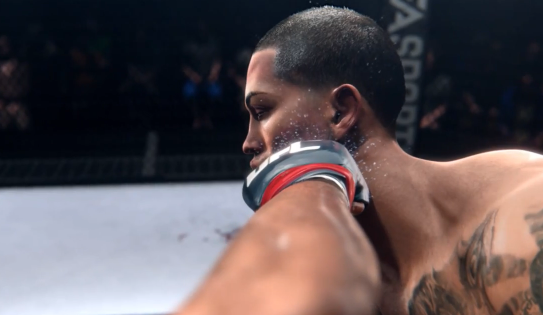 The career mode has been updated quite a bit and it has taken several steps forward from years past. The inclusion of video messages from trainers and even UFC President Dana White give the career mode a more personal touch. You feel more connected to the UFC through this mode and it makes it seem like your created character is actually a part of the sport. There is also a new and improved leveling tree which lets you customize your fighter based on your own criteria. Whether you prefer to focus on striking or you want to be a submission artist, the choice is easy to execute. These two strong features takes the career mode to a new level of immersion and realism which is what this game is all about.

Overall, EA Sports UFC is definitely the best UFC game ever made. However, it still suffers from some major issues that prevent this game from joining the upper echelon of simulated sports games. There is some room for improvement, but the franchise is in the very capable hands of Electronic Arts and EA Sports. We are sure that this game will reach its potential within the next few iterations of this game, but when you look at this year’s version, it is still rough around the edges. If you love the UFC and need your yearly fix of MMA on consoles, then by all means jump in. But if you are looking for a more polished product, proceed with caution.