Xeodrifter is modeled after the beloved Metroid and successfully recreates the metroidvania world that so many people love. I’m not even entirely sure if this is 16-bit or even just 8-bit, but it certainly has that old-school, retro look about it. This will please many gamers who grew up with these kind of games. Unfortunately, its nostalgia does most of the heavy lifting as it’s gameplay didn’t really invoke that much enjoyment out of me. 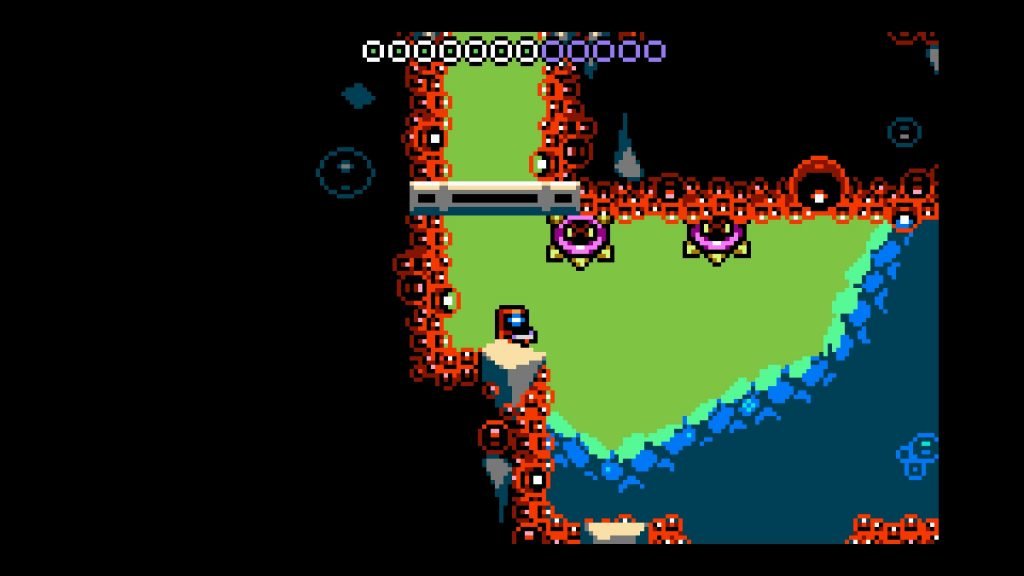 The opening of Xeodrifter shows a spaceship being hit and losing its warp-drive capabilities. You are stranded between four planets and must traverse their dangerous worlds to recover the materials needed to fix your ship. There is no elaborate story and that’s okay. You don’t need motivation to explore the planets; your gamer instincts will do that for you.

I was immediately overwhelmed because I wasn’t use to games immediately letting go of my hand. Xeodrifter essentially shoved me into a level and expected me to discover everything on my own. I respect that in a way where – like my character – I am stranded all alone not sure what to do or how to do it. I figured it out eventually after dying a lot. I mean—a lot.

I lasted only around thirty minutes on my first session because I became too frustrated and I quit. It was tough and confusing and I had no idea what I was doing. I came back another day with a little more focus and patience and I was finally able to start progressing. 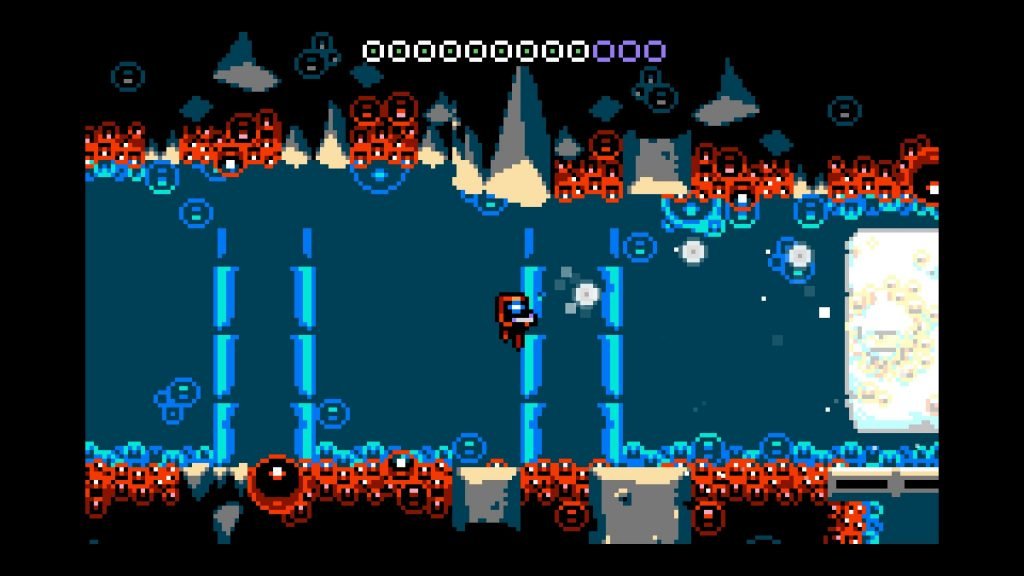 The beginning of Xeodrifter is hard! You only have three health bars, and your gun is pitifully weak. I had to traverse the level very, very slowly or I would find myself in a helpless situation. I partly blame this on the way the enemies sit just outside the screen. I wanted the screen zoomed out a tiny bit more, because as it stands, the levels are designed so enemies are positioned perfectly off screen. This could be on purpose, I’m not sure, if it is, I like it even less. It feels cheap when you are moving quickly or forced to jump onto a platform in such a way you cannot see an enemy sitting off the screen with a powerful attack that can reach you. I think it’s safe to say that 85% of the times I died was due to an enemy attacking from off screen versus my own skill level.

This never really goes away, but you end up memorizing most of the levels. I don’t exactly consider this a good thing, because it means you are backtracking for the entirety of the game. You can get turned around pretty easily as well. You’ll obtain a new power up and then have to remember back to a previous world where you can use it. If you weren’t paying attention, you’re going to need to travel to each world and check them out again. This type of exploration is what some gamers love to do, but others (like me) will find it more of a chore than anything. Luckily, Xeodrifter isn’t that big, so when you have to backtrack it isn’t that far. Still, it’s backtracking and it gets old after a few hours. 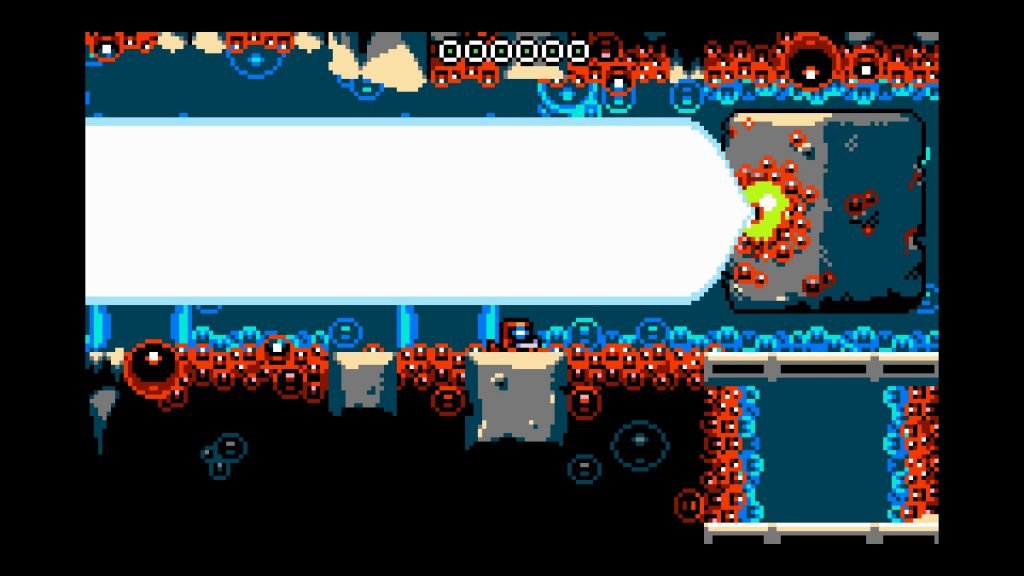 The beginning was challenging because you are so under leveled and under geared. After you beat the first boss, collect a few health nodes, and weapon upgrades, Xeodrifter starts to open up a lot more. When I had a little more leeway with taking damage I could move a little faster making the flow of the platformer feel better. It’s fun upgrading your weapon and getting to decide whether you want more power, faster bullets, or even have the bullets travel in waves. I dumped it all into power so I wouldn’t have to pause at every enemy and slowly chip away their health.

My biggest issue (this is something I hate in all video games) is the repeated use of bosses. I understand Xeodrifter is a small indie game and that gives it some more leeway, but there is only one boss throughout the entire game. That’s right, only one. You fight him over and over. He may add one more attack each time, but you figure it out quick enough and then he’s the same boss you just fought. After the third time fighting him you can beat him easily without a scratch. 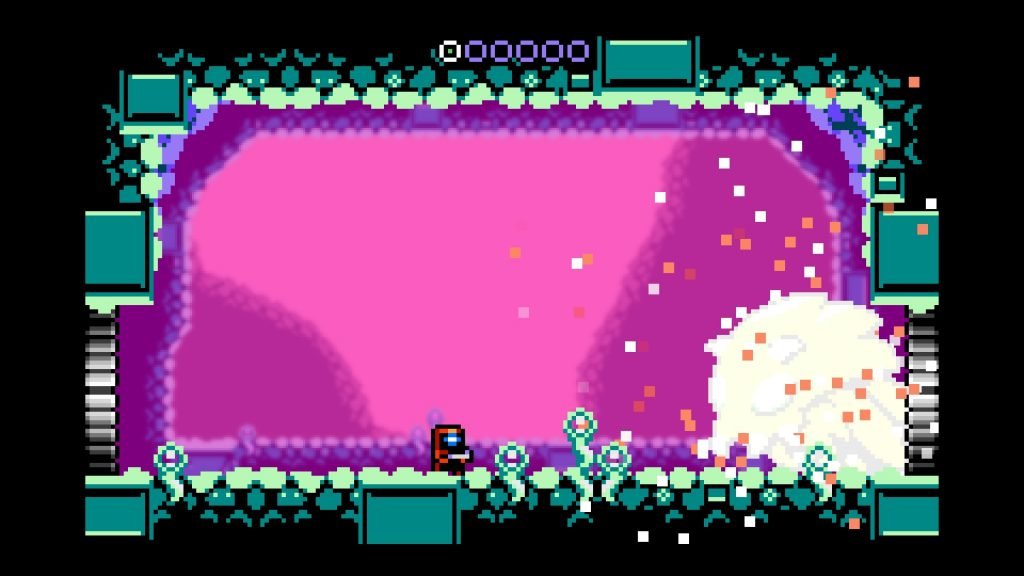 Xeodrifter is a great throwback to the classic metroidvania games so many people love. Its style, music, and even its sound effects will ring the bells of nostalgia in your mind. It’s tough and challenging with a steep learning curve, but becomes more fun after you level up a bit. All the backtracking and cheap deaths ruined most of my experience. I had some fun here and there, but mostly it felt like a chore exploring areas I previously visited over and over. All this doesn’t mean it’s a horrible game to skip, it certainly has it’s flaws, but there is definitely a niche group of gamers who this is targeting. If you know you like retro platformers, and need something to scratch that Metriod itch, then this may be worth checking out. Otherwise, Xeodrifter isn’t going to hold your attention for long.

This review is based off a review code of the Playstation 4 version of Xeodrifter developed by Renegade Kid and provided by Gambitious digital Entertainment.