I love Trine. I’ll say that without hesitation and right up front. The original Trine was the first game I reviewed for New Gamer Nation and Trine 2: The Complete Story was one of the first games I played on my PS4. For me, Trine is synonymous with riotous co-op fun with my brothers. It’s why I was looking forward to Trine 3: The Artifacts of Power so badly. It’s also why I can’t help but admit Trine 3 has let me down by being the worst in the trilogy.

The story takes place how it usually does. The three heroes are doing their usual when the Trine teleports them all on a heroic quest that will undoubtedly save the world. It’s the typical fantasy story, but Trine has always done a good job of poking fun at the fantasy genre. The story starts a little slow but when it starts to build and unfold it got me more interested than the previous titles in the series. Trine 3 explains the history of the Trine and how it came to be—something I’ve been wondering since I played the first game back on PS3. The biggest issue is how the story abruptly ends with a cliffhanger, but I’ll get to that whole troublesome matter later. 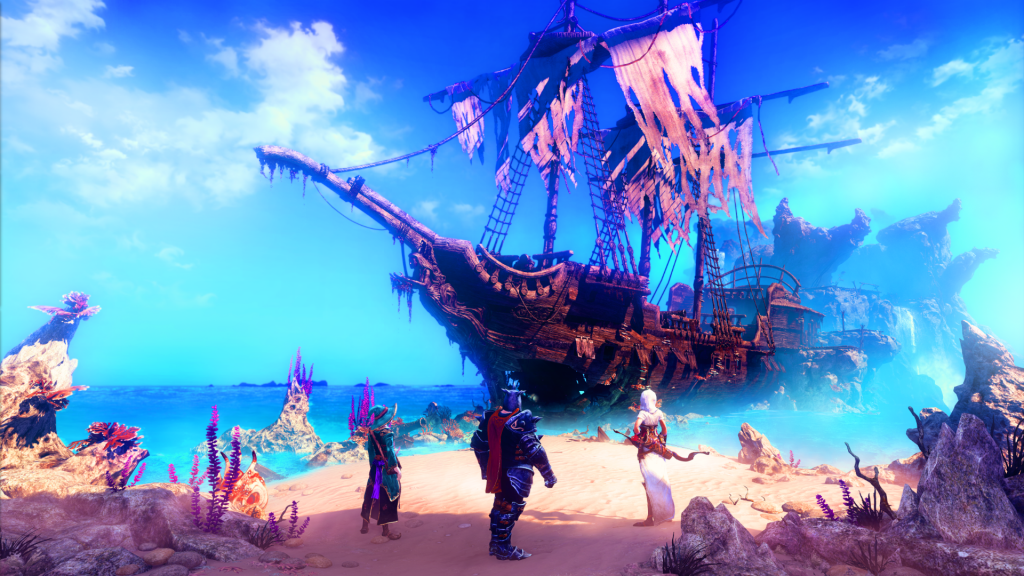 For those that have no idea what Trine is, it’s a 2D platformer with physics based puzzles. You can control one of three characters: A knight, a wizard, and a thief. The Knight is the fighter to take on most enemies while using his strength to solve puzzles. The Thief has a bow and arrow to take out enemies in the distance and a grappling hook to swing across big gaps. The wizard can’t fight very well, but he can conjure blocks to help solves puzzles.

Trine is also known for being stunningly beautiful. Everything from the artful backdrops, characters design, and the majestic soundtrack. It takes you away to a fantasy world and succeeds once again on that front. Trine 3 tries to advance the series by changing from 2D to 3D. In some ways it works. It’s the most immersive title in the series. I was completely encaptivated by some of the levels and the scenery. Being able to jump into the background sounds like a little detail but makes the world come that much more alive. It feels more fleshed out than ever before, and in that manner going 3D was a great success. 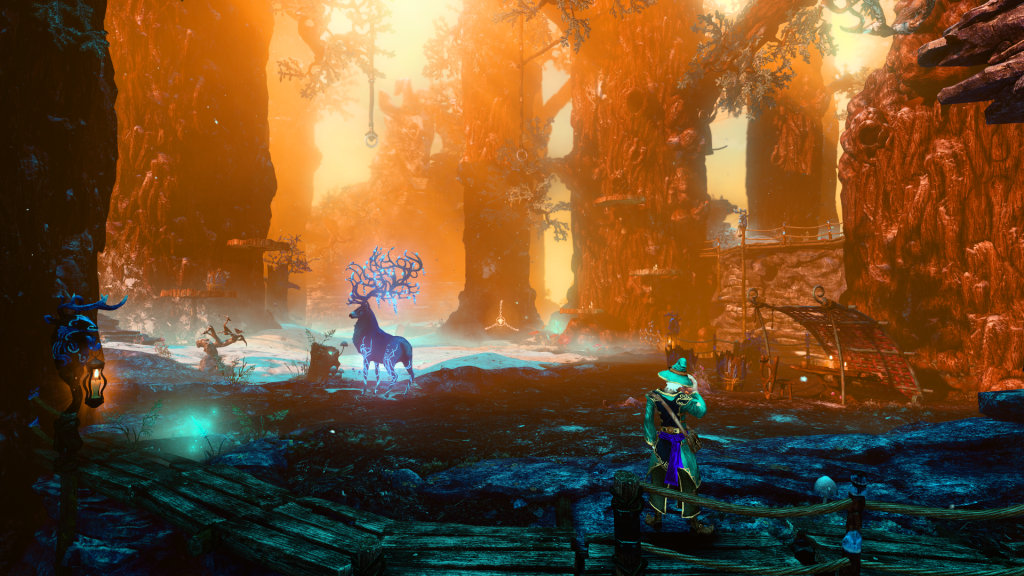 The same can’t be said for the gameplay side of going 3D. It creates some more interesting puzzles of course, but it makes the basic platforming aspects much harder to grasp. The fixed camera creates some funny angles at times, and trying to make those precision jumps between platforms can end with you falling to your death. It’s annoying, but it never frustrated me too deeply because of how quickly you could recover.  That’s not defending it. Anytime you die because of a funny angle or technicality like that feels cheap.

The puzzles are still physics based and that allows for multiple solutions to each puzzle. It’s interesting seeing how other people accomplished the same feat as me but with a different character. It’s allows for the individual personalization I love Trine so much for. It also still makes co-op an absolute blast when everyone has their favorite character and puzzles become much more difficult to get every character across that gap. Naturally, the good old tactic of floating everybody across the gap with a block the wizard levitates never fails. The fun is still trying to avoid that common tactic and figuring out another way.

This brings up one issue with the 3D element because there are now more ways to “cheat” a puzzle as well as misleading pathways. The Knight can glide in the air and many times it’s possible to move towards or away from the screen to circumvent a roadblock. There are other times you think you are finding a secret area only to plummet to your death behind a rock. There are some fences to guard the edges, but any lawyer could win a case for how unsafe they are. I fell to my death countless times because I thought I was onto some secret path, but I was really just glitching up a wall to nowhere. 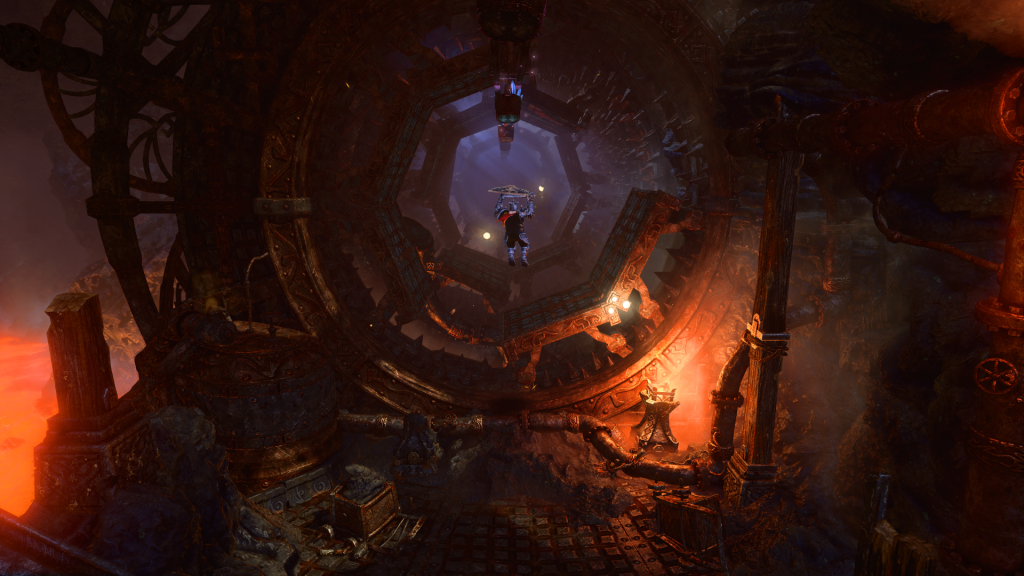 Aside from the 3D there are some minor gameplay changes to keep the Trine series feeling new. Some I like, and some I really hate. I like that now when a character dies you need to stand near their body to resurrect them. Before, you needed to find the closest check point and they would spawn. This prevents annoying backtracking when you are stuck at a puzzle and will die repeatedly. It keeps the game moving, but also makes it more difficult for some battles. In the old games, one character could stand at a check point so if anyone died in battle they would instantly come back. Standing near their body is much harder to do when enemies are trying to kill you. It’s why I personally like the new respawning system.

Sadly, everything else they changed up and made new I don’t like. The new way to unlock levels is by collecting enough floating triangles. It takes away from the experience of solving puzzles and beating a level. I was focused on collecting everything I could find, and I know some people love that, but I hate it. I don’t like being forced to collect thing to advance the game. It would be acceptable if unlocking the main stages didn’t take that many triangles. Sadly, each level took a lot to unlock. I was locked out of the last level and had to backtrack through previous maps to find missing triangles. It makes the game longer, sure, but only in the worst way.

There are mini bonus levels that you only play as one character, and these would make sense to require more triangles to unlock. Let people play the main game, and then go back and search thoroughly through the levels to unlock these bonus levels.

Not that they are exactly worth unlocking. Some are fun where your primary focus involves figuring out puzzles with only one character. The issue is they have no checkpoints in them. So a misstep in the final area will make you start over. They’re short enough so it isn’t too annoying, but a checkpoint midway through would’ve been welcome. Some just involve fighting a couple waves of enemies, and maybe some people like that. For me, Trine is about puzzles, not fighting, so being forced to endure these waves was an annoyance. Even if a bonus level, I had to do it to get enough triangles to unlock the main levels. 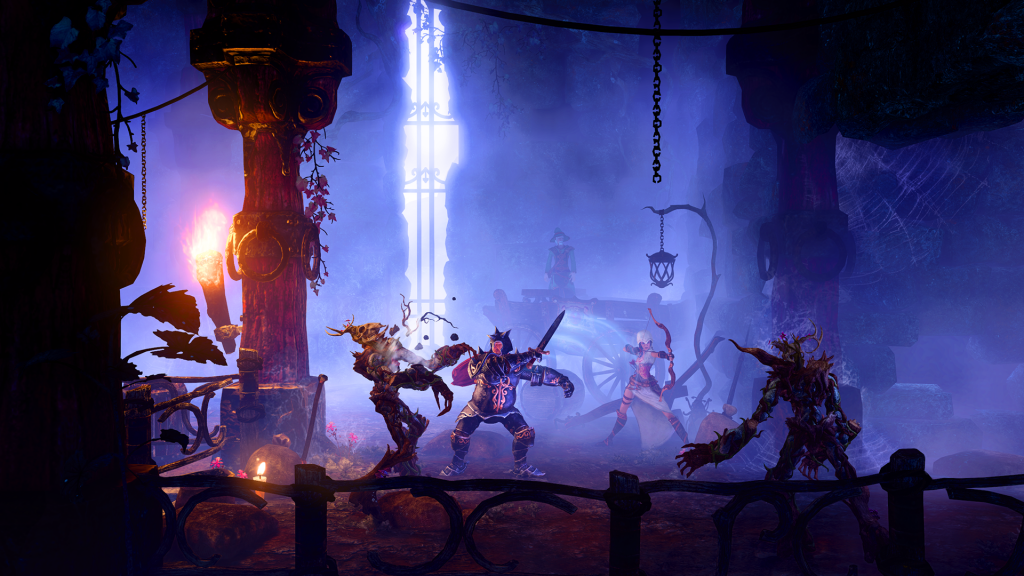 Trine always had you collect items in each level, but a lot of that was gathering experience to level your characters. You had a reward you were building towards and got to see that reward in action when you unlocked a skill. In Trine 3 there is no experience to gain and no skills to unlock. The missing experience and skill trees were a noticeable absence that took away a big sense of progression the previous games had.

The biggest issue is the ending. It just ends…right when it was really picking up. It makes it feel like Trine 3 is only half of the game they were originally planning. Nothing is wrapped up and barely anything is answered. It sets up for a whole new journey. Only…there isn’t going to be one. Maybe there will be a Trine 4 down the line somewhere, but the developers admitted there were no DLC planned to fill the gaps. The developers were super honest and basically said they ran out of money. It’s clear to see with how it cuts off so abruptly. The jump from 2D to 3D cost more than they thought, and that’s probably what upsets me the most. The 3D aspect is cool, and it makes the game feel new, but I would rather stick with the 2D if it gives us the full adventure. The 3D is nice at times, but it really gets in the way more than anything.

It reminds me of back in the day when Mario, Sonic, and various other games that went from 2D to 3D. In some ways it worked, and in other ways it completely failed. But no one would know until that jump was made and people could look back to see what worked. That’s Trine 3 in my eyes. It tried something new (which is something I always respect) and it succeeded in some ways and failed in other ways. 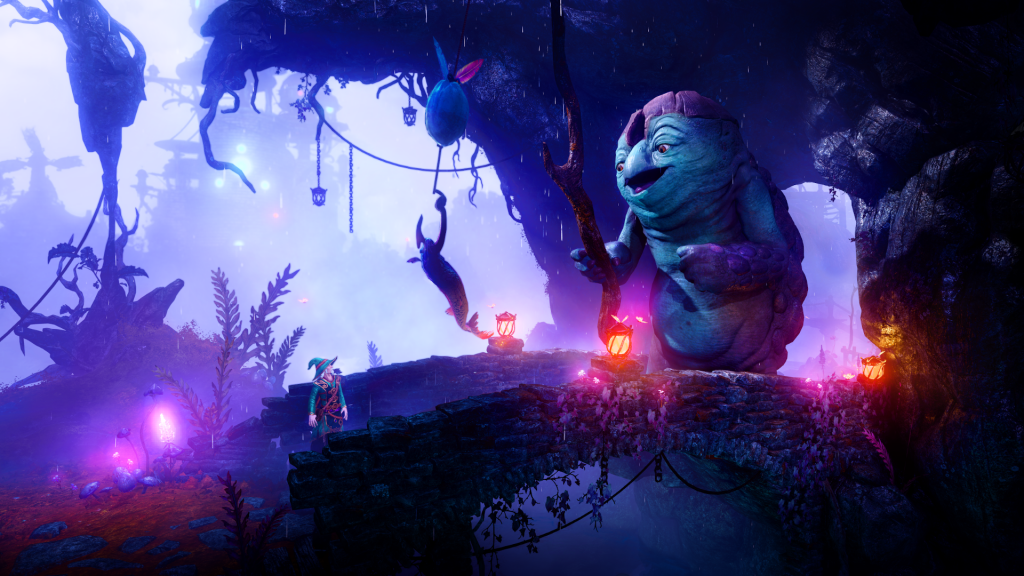 I can say that if you love Trine then you should definitely get Trine 3. It’s a little hefty of a price at 20 USD and only about 5 hours of content, but it’s still a lot of fun.  Playing with others is a blast and Trine remains one of my favorite co-op games. (it is worth mentioning I had trouble joining some online sessions, but I can only assume a patch will fix any connectivity issues there are).  If you’ve never played a game in this series then you probably can’t justify the purchase, but I do highly recommend the first two titles. Maybe then you’ll come back and check out Trine 3.

Maybe if there was more money in the bank Trine 3 would be a greater success. But there isn’t, and that’s life, and we are left with half a game. It’s a great half that’s a lot of fun to play, and maybe that’s exactly what the problem is with Trine 3. The game isn’t bad. Yes it has flaws, but when it comes right down to it. It’s still an absolute joy to experience. So I can see why everyone is upset with how it ends because we wanted more. We were having fun and enjoying ourselves, we just wanted more. Hopefully, someday, we will get more.

This review is based on a review code of the PC version of Trine 3: The Artifacts of Power developed and distributed by Frozenbyte.