It’s interesting to see that the latest in visual novel offerings from publishers like Idea Factory making their way to multiple gaming platforms recently, seems to be tapping into a wellspring of content that’s been well appreciated by Japanese tastes for quite some time now.  I use the word tastes here in place of gamers because I hesitate to classify visual novels as games because aside from prompting the user for a simple button press to keep speech bubbles reloading with new text, or loading a new cut scene, there usually isn’t much in the way of interactive features that are more commonly seen in a typical video game. The visual novel genre is also splintered off into different sub-genres with some featuring more, and some featuring less game type mechanics than others, but they typically offer the player an immersive narrative experience giving the player some control over the actions of the main character, ultimately shaping the direction of the story and offering multiple endings, usually with the best, or happy ending being the ultimate reward.

Amnesia: Memories, by Idea Factory, is a teen anime visual novel in the otome (girl game) genre that also doubles as a dating simulation game. It’s similar to harem manga games in which usually a male protagonist must romance multiple female characters. However, in this case, the main protagonist is a silent female character that must romance and find love with multiple male characters, or boyfriends in order to receive a good story ending. More specifically, the main protagonist in this game has amnesia, and must restore her memories by investigating the accident that caused her memory loss by going through mundane routines of her day-to-day life, and rehabilitating her relationship with her boyfriends without letting anyone know about her amnesia.

When the game starts, you have the choice of visiting between four different worlds to explore, each with a different boyfriend. Once you choose a boyfriend, your goal is to spend time with them, with a time limit of one month, in order to regain your memories while also investigating the cause of your amnesia. The four worlds represent alternate histories, in which the same characters are reused and re-purposed, serving different roles in each story. For example, the main boyfriend in the first world, only appears as a supporting character in the second world.

The different boyfriends also have unique stories and personalities to them. The first boyfriend, for example, is a primary suspect directly involved in the accident that caused your amnesia. Building a relationship with him is pretty tricky because there are often times when you might not feel that he’s trustworthy, keeping in mind that in order to gain a happy ending, you must fall in love with him. He will often ask you to get involved with helping him prove his innocence even though his behavior and attitude towards you might seem suspicious. It’s actually a very good mystery, and one of my favorite of the four scenarios.

In the second world, your boyfriend is more of a playboy type, often making it difficult to plan time with him because he keeps brushing you off and mysteriously disappearing, probably spending time with other girls. You spend a lot of time communicating with him over phone texts. While there doesn’t seem to be nefarious motivations behind this boyfriend’s behavior compared to the suspect boyfriend in the previous world, there is still enough mystery to motivate investigating the character nonetheless. The game is a dating simulator after all and it tries to emphasize this with its romance situations. One of the tough decisions that came up in this story was whether or not to sleep with your boyfriend after you heard rumors that he was interested in another girl who is trying to steal him away from you and is willing to sleep with him. It might seem like a silly decision to ponder, but keep in mind that rebuilding relationships and finding romance with these boyfriends is the only way to get a happy ending, regardless of how idiotic or insolent the boyfriends behave. 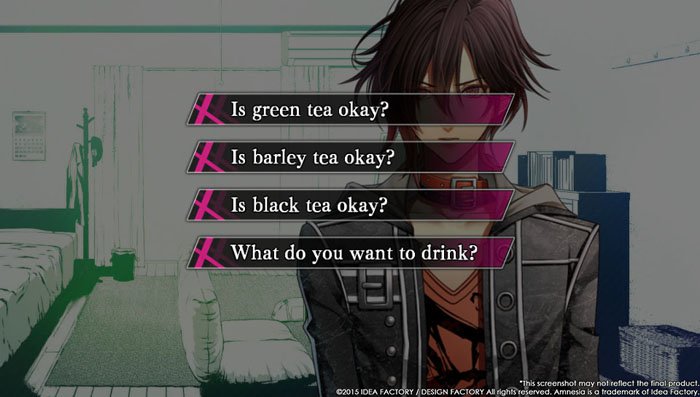 There is also a very anime supernatural element framing all of the stories to make things more, or less, interesting depending on how many anime tropes you can tolerate. Before visiting the different worlds at the beginning of the game, you are introduced to a spirit guide character who also serves as a guide throughout the game offering relationship advice for each boyfriend. This spirit guide was traveling across worlds and accidentally got lodged in your mind, which caused your amnesia, thus, the only way to free him is by restoring your memories.

In terms of game play, the decisions you make via dialog menu prompts influence parameters that control the stories direction and ending. While the story lets you roll-back decisions to affect the parameters, and the story, the game does a very poor job of illustrating exactly which decisions affect which parameters, thus making most decisions somewhat blind. Despite the game having multiple endings, figuring out which decisions are necessary for the best ending is really difficult, and subsequent replays are a necessity to see all of the possible endings. 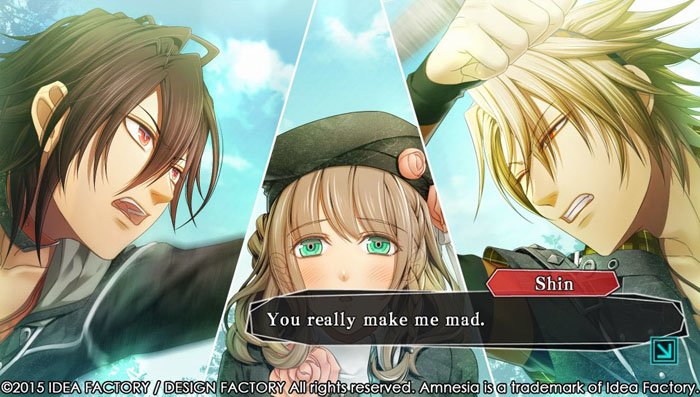 Despite these qualms, I generally enjoyed my experience with the game. It is more of a digital book for those that love reading anime or manga, with added Japanese only voice acting and lush 2D character designs. It offers four unique re-playable stories with different endings that lets you affect the outcome. The soundtrack is superb, offering a diverse arrangement of melodic tunes that set the romance tone perfectly and also creates a nice ambiance pleasant for reading. Some of the extras include a fifth un-lockable story, mini games (air hockey and paper-rock-scissors), as well as a gallery of artwork unlocked by progressing through the game. The game is a welcome alternative to the everyday ‘boys-only’ games servings, offering the player a perspective from a female point of view and tapping into a sub-genre—girl games, that the gaming community has been crying out for. It’s good!

This review is based on a review copy of Amnesia:Memories published by Idea Factory.

Love Is In The Mind | Amnesia: Memories Review
The game is a welcome alternative to the everyday ‘boys-only’ games servings, offering the player a perspective from a female point of view and tapping into a sub-genre—girl games, that the gaming community has been crying out for.
Positives
Negatives
2015-09-14
7.5Overall Score
Reader Rating: (0 Votes)
0.0