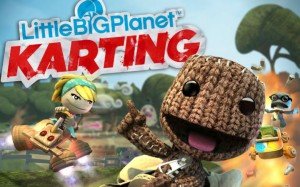 A couple of weeks ago, I received the coolest gift. Being the PlayStation 3 owner that I am, I was selected to be a beta tester for Sony's upcoming game, Little Big Planet Karting. I gratefully accepted this opportunity to put my sackboy on the race track a few months before the official release date of this new addition to the Little Big Planet franchise. Start your engines, LBP Lovers. Gear up your sack person and get ready to hit the race track for their next great adventure, because Little Big Planet Karting will be released on November 6, 2012. In this new addition to the LBP franchise, you will be zipping around Craftworld in your very own fancy-schmancy, highly customizable race kart.

Like the other Little Big Planet titles, LBP Karting will also be a PlayStation 3 Exclusive, and this new addition to the franchise stays true to the gameplay that makes the series so popular. If you have played ModNation Racers, another PS3 exclusive, you will find many similarities between that and LBP Karting, but do not let this discourage you. In LBP Karting, gamers will be able to play, create, and (of course) share their creations with the online community via the PlayStation Network. Being able to customize and create virtually anything and everything is exhilarating.

Little Big Planet Karting is loads of fun and will change the way you think about racing games… well, probably not, but it's really darn entertaining! One humorous aspect to the series is being able to reach out and slap (yes, slap) the nearest sack person. Now you can do it on wheels! Reach out and slap your close competitors, stunning them for a second while you take the lead. As you race to the finish line, you can collect w

http://goexback.com/ How to win back your ex

eapons along the way and swing from grappling hook devices, which were first introduced to us in the first Little Big Planet game. Use all of this to your advantage to be victorious. If you grow tired of the exciting and scenic worlds that come pre-made for you to race through, you can go into create mode and make your own tracks. Creating your own track (especially if you are new to the Little Big Planet series) can be tedious, especially if you want to create an amazing track that will make all of your friends green with envy. On the plus side, though, the tools are very easy to navigate through. Thank you, Sony. The possibilities in this game are truly endless.

The “E” rating on the Little Big Planet games (especially on Karting) don't lie. These games really are for everyone. No matter if you're young or old(er), there is fun to be had on these fabulously created tracks. Customizing your sack person and karts is only half the fun. The first Little Big Planet game quickly became a PS3 greatest hits, and it has paved the way for Little Big Planet 2 and Little Big Planet Karting to be received well by old fans of the franchise and any newcomers.

Little Big Planet Karting allows players to do a lot of things other than simply racing. There are challenges, missions, and even battles to partake in with your online friends. During these aspects of the game, you are placed into a large arena, either trying to fulfill a mission or trying to combat other little sack people for the win. Some weapons that you find in the arena can be used to take other players out more quickly, earning yourself extra points along the way.

From your sackboy (or girl), to the race karts, right down to the levels themselves, the world is yours to command. Little Big Planet Karting puts you in total control of your surrounding. While you play LBP Karting, just remember: If you can imagine it, you can create it.