Mario Golf: World Tour launches into the 3D realm with a “nice on” with the latest iteration of the golf simulation. The Mario Golf universe is aesthetically pleasing to look at and certainly feels like it is a part of the Mushroom Kingdom universe. After playing through the game for a few hours, I felt the need to go back and look at the original Mario Golf games. From NES to N64, Gamecube to Gameboy Advance, the updated 3DS iteration of this series is a solid upgrade; however, looks aren’t everything. 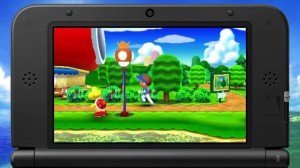 One of my biggest frustrations with the game was the overall lack of direction.

Players are given two options from the moment the menu loads: Castle Club and Quick Round. Quick Round has a nice variety of game modes. These modes include Stroke Play, Match Play, Speed Golf, Point Tourney, and Challenges. In Stroke Play, players compete for the lowest overall stroke count. In Match Play, players compete for winning the most holes and in Speed Golf players compete for the fastest course completion. Challenges are the strong point of Quick Round. Challenges offer unique goals and tasks for players. These challenges would have been better placed in Castle Club. Having your Mii complete the challenges would have made your experience of growing in Castle Club’s community more involving.

Unlike previous versions of Mario Golf, such as the Gameboy Advance Mario Golf, players are given little to no direction as to where to begin. One of my biggest frustrations with the game was the overall lack of direction. In this new Castle Club mode, players control their Mii from an overhead perspective. Castle Club has all the potential for an inclusive “Welcome to the Mushroom Kingdom Castle Club!” tour with none of the delivery. I envision Toad walking around with the player showing off just what Castle Club has to offer. However, instead players are forced to explore this unexplained layout. The controls of walking around Castle Club are a little clunky, but it’s mostly the interactions with other Mushroom Kingdom NPC’s that takes away from the club’s explorative feel.

Different characters will discuss various events, tips, etc to you through dialogue. However, it is these very same “dialogue” inserts that take away from the game. It’s not necessarily important that every single line is voice acted with words, but it is the flaw many Mario games struggle with where characters don’t have a very unique set of sounds to represent dialogue. As I was going through the game, almost every single sound a Toad or Toadette made was recycled. The recycled use of sounds takes away from an already lackluster explanation of the game. The visual presentation is well done but the overall experience definitely left room for improvement. Never would I have guessed I would see a pink shy guy running on a treadmill to prepare his golf game. These random nuances are certainly rewarding to discover, but exploration felt more mandatory than encouraged. 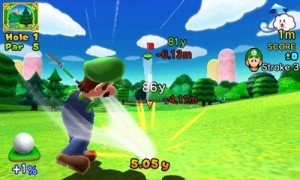 When you do finally find yourself on the course, the game is solid.

When you do finally find yourself on the course, the game is solid. Though not immediately known to the player, again due to a lack of explanation, there are two different styles a player can utilize when they go to hit off the tee. The easy control scheme is much like any other golf game. On the HUD you can switch clubs, adjust your shot for wind, power/no power, and between Easy and Manual Mode. Beginners will easily pick up the gameplay and find that most of the time you don’t have to adjust much. Golf fans and fans of the series respectively, will enjoy the intricacies that the manual mode allows for. Manual mode has some interesting quirks like adding Topspin, Super Topspin, Backsping, and Super Backspin to a shot. These are never really explained and they only appear briefly in manual mode after hitting the ball. Forced self-learning is not necessarily a downfall, but for a game made for a mobile device like the 3DS it was a bit jarring. For a “world tour” it didn’t feel very much like on-the-go golf.

The learning curve is rewarding when you finally acquire all the knowledge you need to adequately play using all of the aspects in the game. Once learned, you can take your Mii online and compete against other players around the world in tournaments. This is one of the best parts of the game and is definitely well developed. The Online Multiplayer is surprisingly well done for a Mario game. The tournaments are exciting to take part in and provide more competitive tension that the single player and bot play lacks.

For those who really love competitive multiplayer, World Tour achieves this in the best way a golf game can. Download play and Local Play would have been an incredibly nice feature. Although, I understand the reasoning behind exclusion of download play, with a sport like golf, being able to take a swing and then hand the 3DS to your friend so they can take a shot on the same course and play with you is important. One of my favorite aspects of the game is the customization and stats offered through purchasing apparel. When you purchase golf gear such as a Hammer Bros Pants, your Drive Range, Sweet Spot, or Control stats receive a boost. The aspect of customization on your Mii is fun and rewarding, respectively.

World Tour offers traditional style golf courses, such as par 3, par 4, and par 5. These courses are aesthetically very natural to the Mario Universe and few things seem out of place in an already strange Mushroom Kingdom. There are special courses that offer unique hazards and gameplay changes. For instance, one course has Donkey Kong Barrels where hitting the golf ball into a barrel redirects the ball onto a different part of the green. These special course are definitely a nice touch and add a lot to the variety of play.

Mario Golf World Tour is a successful next step for the series and Nintendo has a created a strong online community. Learning the game is like driving off the tee toward a green with no flag. The lack of direction can be a little frustrating at times and takes away from the drive to explore. The overall experience is enjoyable and definitely worthwhile if you’re a fan of the series. For a mobile game, it’s important you set yourself enough time to learn everything Mario Golf has to offer before taking it on the go. Once you’ve mastered gameplay this game has a nice variety of options and customization. The options for future DLC along with the challenges and multiplayer built-in leave Mario Golf World Tour with plenty of replayability.  As sports games go, Mario Golf accomplished what it intended to do just under par.

This review is based on a retail copy of the Nintendo 3DS game Mario Golf: World Tour by Camelot Software Planning and distributed by Nintendo.