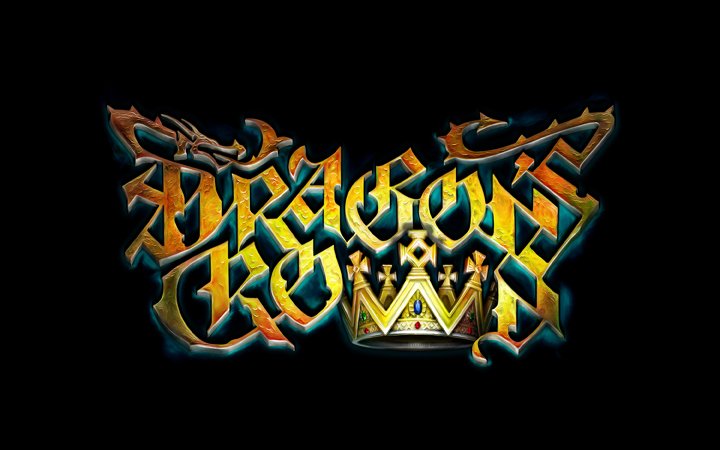 Dragon’s Crown is the latest game by Vanillaware, a company well-known for its distinctive 2D art style. It is a fairly traditional brawler at first glance, but there is far more lurking just beneath the surface if one is willing to dive in. Borrowing aspects from both RPGs and dungeon crawlers, Dragon’s Crown quickly becomes a manic mélange of a slew of great genres; but the main question on everyone’s mind is, “Is it fun?” Well, let’s get down to brass tacks. 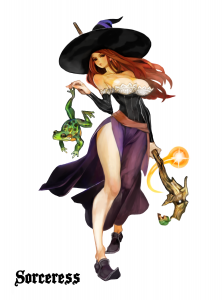 If she were real, lifting that frog would be enough to break her back.

First and foremost is the art style. Players will fall into one of two camps: those who hate it with an undying passion and those who love it with an equal fervor. Personally, this reviewer fell into the latter. It’s over-the-top, exceedingly so, but it’s done with such tongue-in-cheek bravado that it’s hard to not enjoy. Whether it is the dwarf who looks like a side of beef with a beard, or the sorceress whose curves make Barbie seem realistic, as long as it’s not taken too seriously, it’s pretty endearing. But the characters aren’t the only thing to think about here. The environments are absolutely gorgeous; it is honestly some of the most detailed art that I’ve seen in a game for a long time. There’s no debate on this aspect: the environments are beautiful.

Along with the design, the characters themselves are quite likeable. There are six classes to choose from: Dwarf, Fighter, Wizard, Sorceress, Amazon, and Elf. While there are similarities between certain characters, the variety of play styles is incredible. The Dwarf, who relies on pure muscle, plays completely different from the Sorceress, who fires off magic spells constantly. The Elf, who prefers to keep her distance, but can hold her own toe-to-toe, is miles away from the Wizard, who also relies on magic. The Fighter and Amazon are fairly similar, but still inherently different. Vanillaware has done a great job in differentiating the classes, and by doing so, has also drastically increased this game’s replay value. While the story doesn’t change (aside from the ending, of course), the varied gameplay makes it more than worth it, and when you consider that each playthrough is around 15 hours, that’s a lot of game.

Speaking of the story, there’s not really all that much to it. It’s pretty standard fantasy fare: a mystical item is being searched for, and you must help to stop it from falling into the wrong hands. It’s just nothing new, and like as not, players will just skip through most of the dialogue, something that I despise, but am very guilty of in this game. The story just kind of seems to be there as a reason to allow the wholesale destruction of swathes of baddies, not as a reason unto itself.

Now, after all that, let’s discuss the gameplay. Simple and elegant, your sole purpose is to kill everything you see. Your moves vary depending on your character, be it magic, brute strength, or arrows. Regardless of who you choose, though, all can use “Rune Magic.” In order to use this, you must find runes in the background of the stages. Then, you either touch them or use the right analog stick to activate them, add one or two runes from your own inventory, and see what happens. The results can be quite spectacular, running the gamut from brief invincibility to creating a flying carpet. This is a great addition, but it is a bit hard to use while in the middle of a massive battle. 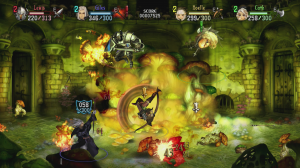 Up to four characters can participate in the fighting, with multiple familiars allowed, as well. When you have one or two allies, it’s great fun; however, when you have a full roster of sorceresses, wizards, and amazons, the screen gets extremely muddled. It is next to impossible to keep track of your character in the sea of brightly colored spells and flying enemies. There is a circle around your character, but it does little to help. Numerous times, I found myself attacking in the completely opposite direction of the enemy, something that makes you feel pretty useless. Because of this, Dragon’s Crown is quite difficult. However, rather than the beautifully balanced difficulty of a game like Dark Souls or Super Meat Boy, you get a game that is difficult for all the wrong reasons. It can quickly become very frustrating because it doesn’t feel like your own fault when you fail, which takes away a lot of the fun that the game potentially had.

Even though this problem rears its head fairly often, the boss fights are still incredible. Every single fight feels different and requires a different tactic to succeed. Whether it’s a kraken that is trying to trap you in a cave or a vampire that will try to turn innocent girls while you fight it, there was clearly a lot of thought put into these encounters. Also, any Monty Python and the Holy Grail fans will enjoy one specific, amazing boss that I refuse to ruin for anyone. Suffice it to say, that alone is almost worth purchasing the game. Of course, there is a lot of loot to be had as well. As you go through a stage, you pick up weapons, armor, and accessories; however, you have to wait to return to town to use them. Also, they have to be appraised beforehand, which costs a fair bit of gold. It’s an interesting system that makes looting a fair bit of fun.

There are a few other points that need to be touched upon. The multiplayer, while being run-of-the-mill, is perfectly fine. The cross platform support between the Vita and the PS3, something we’re sure to see even more of in the near future, is quite nifty; however, I found the Vita version to be much stronger, if only because the controls are far superior. The music and sound effects are good, but ultimately forgettable. Not a single tune comes to mind, and I just played the game about an hour ago.

Essentially, Dragon’s Crown comes down to one word: fine. It’s not necessarily a bad game; it’s just a game that doesn’t live up to its potential. It’s fun to destroy waves of enemies, but it quickly becomes frustrating when you can’t even tell where you are. The art style is great to look at, but there just isn’t much of a story to back it up. At the end of the day, it’s good, but it could’ve been a lot better. Vanillaware has made a beautiful game in Dragon’s Crown, but there’s just not tons of substance behind that veneer.

This review is based on a review copy of the Playstation 3 and Playstation Vita version of Dragon’s Crown by Vanillaware, distributed by Atlus.

Rating:
6.5
Strengths
+Beautiful Art Style
+Great Variety
Faults
-Lackluster Story
-Muddled Fight Mechanics
What would you say?
Average: 0 (0 votes)
Your vote has been submitted
Did you like this? Share it: