With a pillow on my lap, a blanket across my shoulders, and an empty bladder, I was finally ready to play Alien: Isolation. But nothing could have prepared me for how beautifully unnerving this game was. The unscripted moments of the Alien turned my paranoia to the extreme as I crouched under blood-stained gurneys and skirted around broken ceiling vents that dripped with the monster’s acidic saliva. Incorporating the synthetics and other human survivors that occupied the space station, it was a rare moment that I was truly alone and safe. Hiding was only ever a temporary solution and as the orchestra reached a crescendo, I knew that I had been spotted. 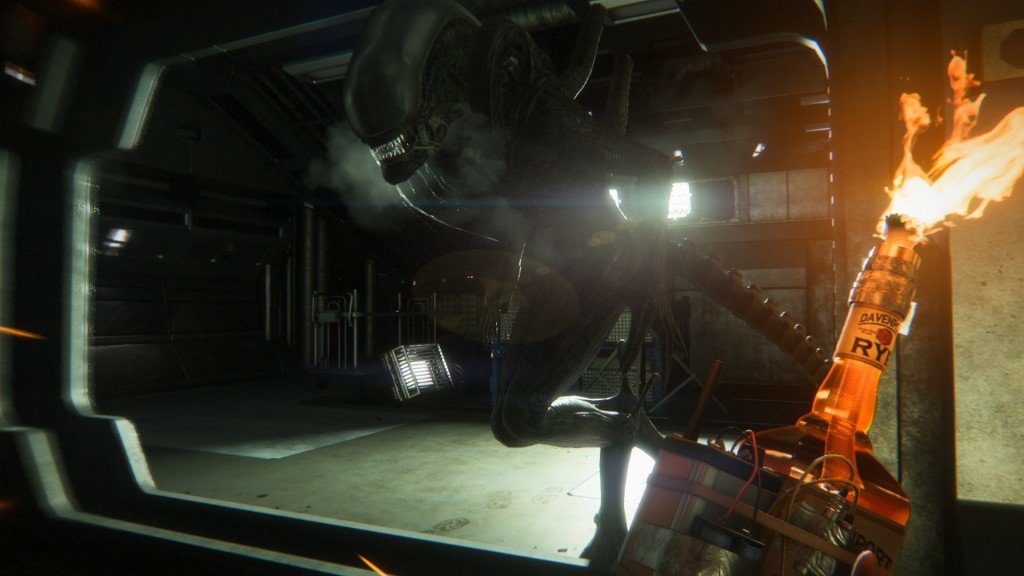 The game is a first-person survival horror stealth game that uses the Alien franchise as inspiration. You play as Amanda Ripley as she investigates the traumatic disappearance of her mother, Ellen Ripley (from Scott’s 1979 film Alien). Amanda is recruited to board the Sevastopol space station in order to search for the flight recorder from the Nostromo. She soon learns that the space station has been met with tragedy as she discovers the presence of the Alien who has killed the majority of the population. Once you enter the space station, you must locate your comrades and find a way to leave the station as you avoid detection from various foes.

Alien: Isolation is a stunning game to behold, and it absolutely nails the look from the first Alien movie. Shadows creep in and dance with light as you navigate the Sevastopol, and occasional glimpses into space provide a beautiful backdrop to your struggle for survival. Though the station is detailed and oozes personality with its “future” tech, the same cannot be said for the character models that inhabit it. While they initially look impressive, the character’s lip-syncing and animations break the illusion. Movement in cutscenes doesn’t look natural, and it seems like every character is moving through gelatin. These unintentionally humorous moments are a constant reminder that you’re just playing a game – and that simply cannot happen with a survival horror game that’s trying to immerse you in its universe.

The unpredictability of the game was both a major asset, as well as a minor inconvenience. Interacting with the terminals, completing puzzles, and redirecting the flow of electricity with the chance of being attacked at any moment was thrilling and left me breathless with anxiety. There were times, however, that I would find myself trapped inside a locker or under a desk as the Alien camped right beside me, unmoving and seemingly to stare into the distance as it contemplated its existence. Eventually my patience would reach its limit and I would leave whatever enclosure I was in and wait to be attacked so that the game could reset. There were also a few moments throughout the game that an empty room would suddenly respawn numerous opponents and the slow weapon change left me unable to defend myself, changing what could have been a fun challenge into a cheap shot at death.

And boy did I die a lot. I didn’t realize how many ways I could be dragged, impaled, suffocated, shot, and beaten, but my enemies were more than happy to demonstrate. After I was done screaming of horror from an unexpected death, I found myself laughing and anticipating the next time I encountered any of my foes. Soon though, it became too repetitive as there were times I was seen through solid walls or in other impossible circumstances and it was a chore to start from the last saved point, as the checkpoint system is a brutal punishment for death. Since saves are so few and far between, starting at the beginning of a level has you repeating tasks again and again, and if you die without saving after a difficult part, frustration is all but guaranteed. 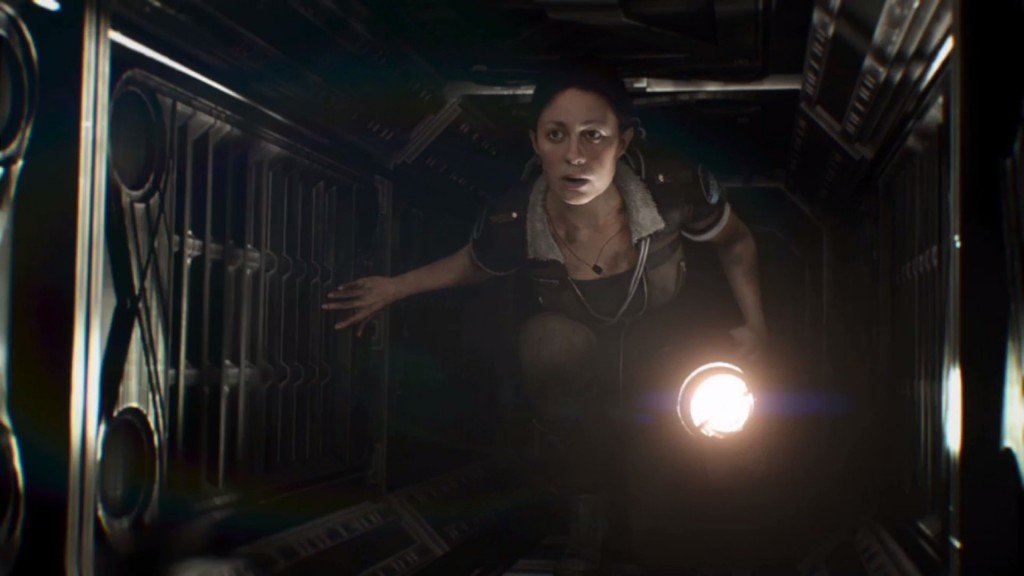 Sometimes running is the only option.

Playing as Amanda Ripley has earned her place in my heart next to Laura Croft and Coco Bandicoot. With her sassy replies and kick-butt attitude, I found myself enjoying her company and idolizing her determination to find closure to her mother’s disappearance. She had a strong personality that could compete with the other characters and the game’s events progressed smoothly with the well written dialogue by Dan Abnett, Dion Lay, and Will Porter. Her prowess with the  technology inside the station was also a fun part of the gameplay and a cool nod to the film series’ “future 80’s” style.

Usually I stay away from first person narratives, however I feel that Alien: Isolation couldn’t be played any other way. Viewing the station through Amanda’s eyes was at times dizzying and claustrophobic as my vision was impaired by flickering lights and bursting pipes inside twisting corridors, but it added a great dynamic to the already eerie environment. Watching the movie Alien is one thing, but actually living in the moment when you’re being hunted is unlike any experience I’ve ever had. This is aided by the unpredictable nature of the Alien’s AI, which has it acting in so many different ways that every encounter felt organic and fresh. After dying plenty of times, I really got to experience the diversity of the alien’s AI. In one section that I kept having to retry, I’d be cornered into a locker on one part of the station. During another restart, I was met with luck as the alien decided to investigate a part of the level I wasn’t near. It may seem frustrating at times that the AI is unpredictable, but it also makes the alien seem much more sinister and alive.

Many of the missions also seemed to drag on longer than what was necessary. I found myself backtracking only to be, once again, lead back to the beginning without really accomplishing anything significant. I felt that the game could have been slimmed down as there were times my interest would wane as the monotony kicked in. During these missions when the tracker wouldn’t pick up a signal despite facing a moving enemy head on or the icons on the map wouldn’t appear on screen, I only felt more annoyed at the seemingly futile objectives.

There’s some interesting PlayStation Camera and Kinect integration, which can track your head movement if you want to use that to peek around corners instead of using buttons. You can also choose to have your camera listening in, so any sort of sound can be heard by your enemies. These are certainly some of the most innovative PlayStation Camera and Kinect integration we’ve seen, but they quickly lose their charm as the ease of simple controls is too hard to deny. 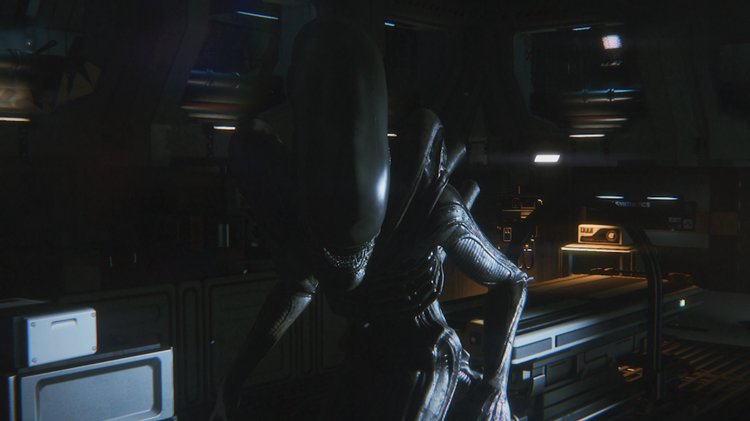 If you are this close, it’s already too late.

Alien: Isolation is a flawed, albeit fun trip into the popular movie franchise. It may overstay its welcome by use of backtracking and monotonous tasks, but its use of the Alien license is so impressive that it’s easy to overlook these hindrances to experience the closest we’ve gotten to a perfect Alien game. Watching characters in the movies being hunted by the alien is one thing, but experiencing that in a survival horror game is an experience unlike any other, and it’s a must play for any Alien fan.

This review is based on a retail copy of the PlayStation 4 version of the game Alien: Isolation by The Creative Assembly, distributed by Sega.

Did you like this? Share it:
In Space Everyone Hears You Scream | Alien: Isolation Review
Overall7.5
Positives
Negatives
7.5Overall Score
Reader Rating: (2 Votes)
10.0