Resident Evil: Revelations 2 doesn’t quite know what it wants to be, and it’s an awkward experience. Stuck in-between a horror game and a 3rd person action shooter, a lot of sequences are reminiscent of an eight-year-old in a supermarket who doesn’t know if he wants bubble gum or a chocolate bar, and they’re constantly going back and forth with their decision. It seems like Capcom has listened to fans’ plea to back off the Schwarzenegger-like action movie vibe recent entries like Resident Evil 5 and 6 have displayed, and they’re looking to return to the more survival horror genre that made the series popular in the first place. Revelations 2 is a step in the right direction for the series, and while the balance of tone is a bit off-putting, it’s one of the better entries since the superb Resident Evil 4. 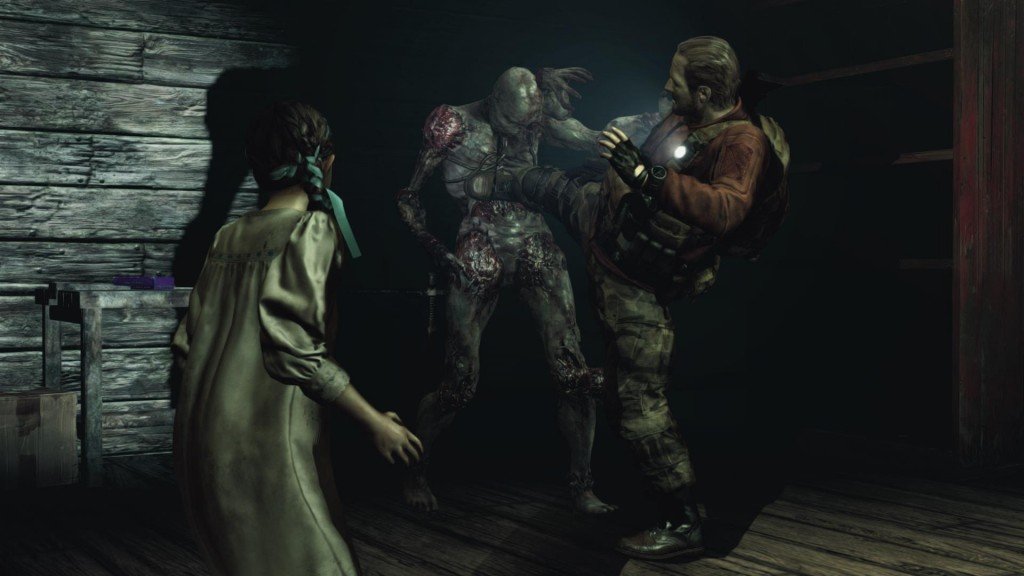 After being abducted at a company meeting, Claire Redfield and Moira Burton are imprisoned on an island infested with the walking dead. Not only are they fighting for their lives, they have mysterious bracelets on their arms and a nameless woman is placing them in deadly games to make them fight for survival. Barry Burton, Moira’s estranged father, lands on the island to try looking for Moira and Claire, and meets a little girl named Natalia, who tags along with Barry in his search for his daughter.

Revelations 2 is broken up into four episodes, and each episode is then told in two segments: one segment has you play as Claire and Moira; and the other has you playing as Barry, as well as Natalia, who has supernatural senses and who’s origins are a initially a mystery. Each episode lasts around an hour and a half to two hours, and the entire game will take around 8 to 10 hours to complete.

Revelations 2 plays just like your average third person shooter with basic shooting mechanics. Clipping zombies in the head fells nice, and there’s also great use of environmental hazards that you can use to trick zombies into wandering to, and it yields satisfying kills. There’s a decent amount of zombie types to keep the combat fresh, and some of the newly introduced un-dead, like these crazy invisible flying bugs that blur your vision, are really interesting and are frightening to encounter.

I played the entire game with my girlfriend in co-op mode, and it made each level that much more engaging. Whether you’re playing as Claire and Moira, or Barry and Natalia, one character acts as the shooter, while the other acts as support. Moira has a crowbar which she can use to open doors or deal some nice melee damage, and she also carries a flashlight which can stun enemies and find secret items; Natalia has an ability to sense where zombies are to help plot out movement. It’s a nice change of pace from the usual “let’s go in guns blazing together” co-op vibe, and it makes both players feel important and unique. I did find that playing by myself was a little cumbersome, as switching between characters in the heat of the moment can prove rather frustrating. Originally, co-op could only be played split-screen, but Capcom just recently patched in online co-op play. 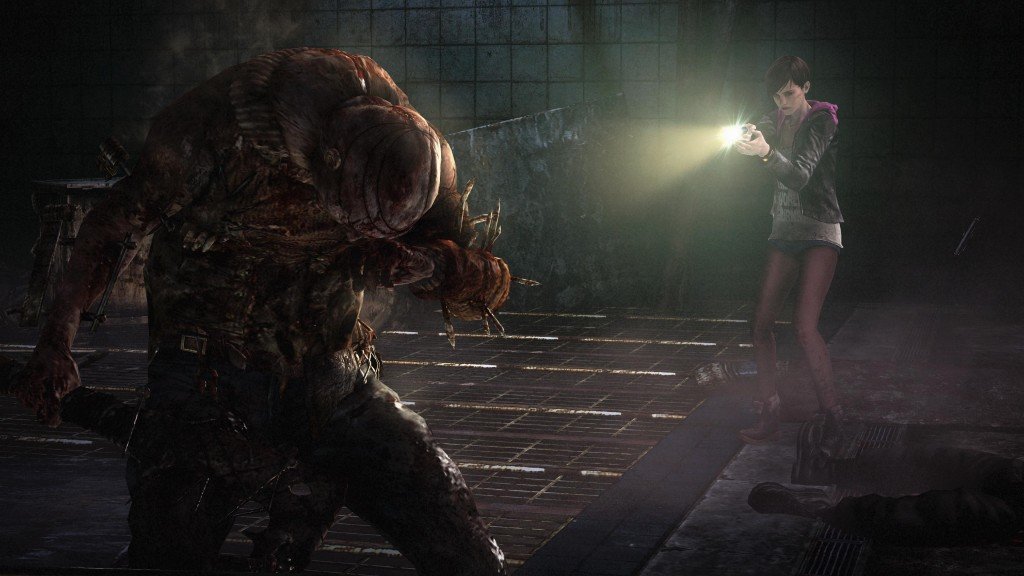 Revelations 2’s focus can be somewhat confusing. I found the first episode had a lot of creepy, horror-filled moments, and I was happy to see the franchise return to its roots, only to slowly have this drift away in later episodes. The horror wasn’t over-the-top in the first episode, but it was subtle enough to produce some chilling moments and general uneasiness. From episode two and on, however, Revelations 2 derails and suddenly we’re jumping out of exploding buildings and fighting roided out monsters with drills. And instead of placing a few enemies in tight areas to induce tension, maps open up and enemies, instead of being in close quarters, are now target practice and lack any true challenge. These more action-like segments aren’t necessarily bad, sometimes they can be fun, but it’s confusing as a player to go back and forth with the questionable direction. The action and survival are not blended together, they duct-taped side-by-side to make one picture.

The amount of drawn out sequences in Revelations 2 isn’t just annoying – it’s downright frustrating. Almost every area features locked doors or blocked areas that must be unlocked by roaming throughout the entire building to get to. Not all of the sequences are necessarily bad, in fact, some of these include fun puzzles to retrieve a key or object, but the sheer number of fetch quests makes the game feel more like a job than a game.

Though each episode is split into two sections, they both overlap with a lot of the same maps. The story does feature Barry and Natalia looking for Moira and Claire, but going through the identical level you just passed episode after episode becomes stale and tired. New buildings or sections in said areas may be opened up to take you on a slightly different route, but they’re not plentiful enough to really change the level variation up enough to feel like a different experience. 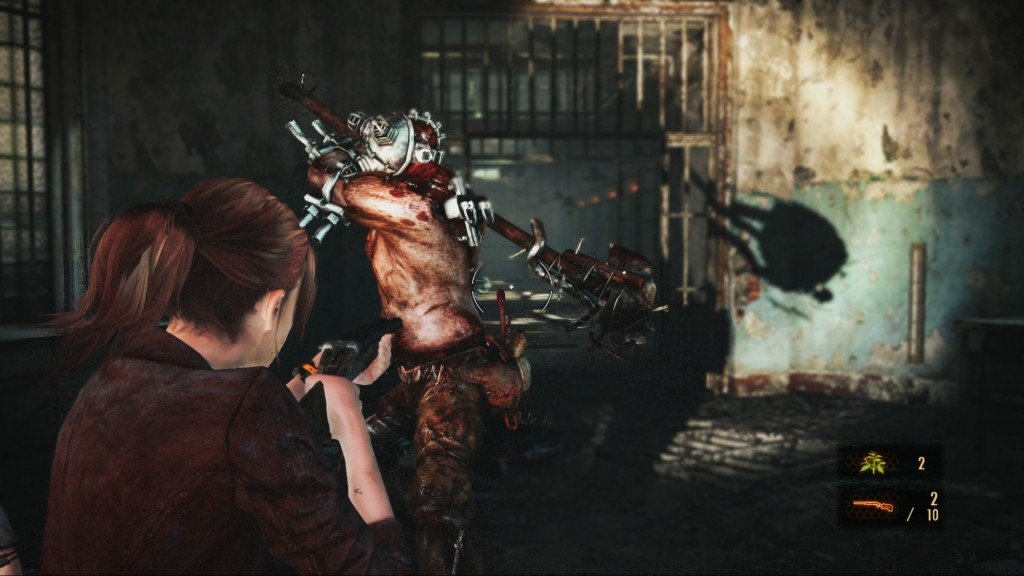 Raid mode is also included in the game, which is just mini-levels where you have to eliminate zombies and enemies, among other objectives. Raid mode is actually a lot of fun, and the ability to buy upgrades, just like in the story mode, makes it highly replayable, and it’s a blast with friends.

Revelations 2 is a fine entry to the Resident Evil series, and the shift from action game back to survival horror is a welcome one. There’s just a bit of growing pains involved that unfortunately weigh down the game’s cohesiveness. Some drawn out sequences and backtracking can really be a downer, especially when it feels like they’re there just to pad out the game’s length.

If you weren’t a fan of recent Resident Evil games, Revelations 2 might just be the right jumping on point, and if Capcom can keep venturing down the survival horror path, perhaps this is the first of a reborn Resident Evil fans have been waiting for – but don’t expect a flawless delivery just yet.

This review is based on a review copy of the Playstation 4 version provided by the publisher.