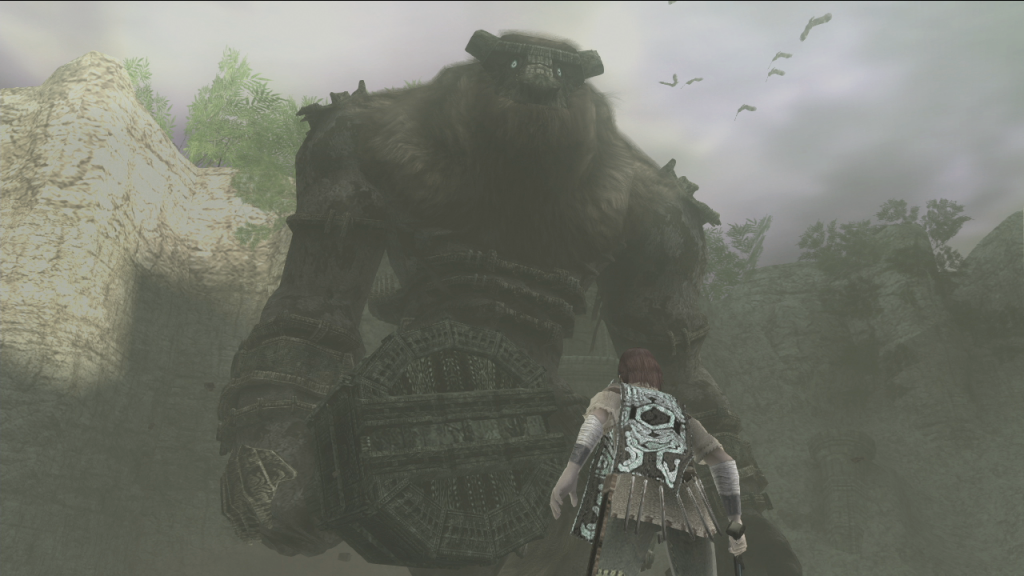 Shadow of the Colossus is a fascinating game. Ahead of its time and conveying an intriguing narrative, Colossus focused heavily on redefined the boss battle experience. It was and still is an awe-inducing game, littered with memorable moments from start to finish due to its grand scale and design.

You play as Wander, a young man on a quest with the sole goal of resurrecting a young maiden named Mono. However, nothing is really known about Mono, or what her relationship is to you, or even really how you can save her. All Wander can do is listen to the gods and follow the glint of his sword, setting out on a journey across an opaque, minimalist-styled yet beautifully washed-out wasteland. With Agro, your trusty steed and only friend, you cross the expansive plain in near-silence; the only living things around, aside from yourself and Agro, are the odd lizard or single circling hawk in the sky.

Upon reaching your destination, you climb up the side of the cliff, round a corner and look up to behold the colossal behemoth Valus stomping around in the sand. As the player draws closer, the reality of its huge size soon becomes apparent. Valus is a bipedal giant covered in fur and stone structures: to bring it down the player soon realises they must carefully clamber their way up the hulking giant. This is an awe-inspiring moment, not least because that kind of scale had never been attempted or seen before in a console game.

Seeing that first colossus not only set the pace and sense of magnitude for the rest of Shadow of the Colossus, but also raised the bar for the visual storytelling and boss encounters of future titles. While the ensuing battle may not be as difficult or intricate as later confrontations, as that first encounter had you thinking, “Wow, I have to bring this thing down,” it quickly became a stand-out moment in gaming history.