Few people would argue that video gaming in general is a very expensive hobby.  Today someone looking at getting into the video gaming hobby would have to spend at least $300 on a new console, just to get the ability to play the games.  Consoles today rarely come with a game to play so then you would be forced to spend $60 dollars on a new game.  Doesn’t it seem a little much to spend all that money on a console just to spend 20% of that cost on one game?  It would be like getting a car for $30,000 dollars just to spend $6,000 dollars to fill it with gas.  Well to understand where these costs are coming from we need to understand a few facts.

Let us start with the price of consoles themselves.  Below are two charts that give you an idea of the historic price of consoles and what those consoles would cost if you were to buy them today.  Please click on the images to see larger and clearer versions of these pictures.

This chart shows you how much consoles cost when they were released to the public.  As you can see that the console prices today are generally in the same price range as consoles released in the late 1990’s.  The exception is the Sony Playstation 3 releasing at almost double what the Xbox 360 came out as but even then it hasn’t hit an all time high.

This chart shows what all the consoles would cost consumers if they were released today assuming that the price was relatively the same.  Again you see that though the prices seem like a lot, video game consoles have always been expensive.  Even the costly Playstation 3 falls short of the all time most expensive console.  What does all this mean and what does it have to do with the games themselves?  Well from this we can tell that the consoles themselves are not the cause of the high price for video games and it hasn’t been a factor for at least 15 years.

To understand what goes into a game at $60 dollars you need to see all the different departments that have to come together to make a video game.  The chart below shows the breakdown of what goes into a new game today and how much each category contributes to the total price. 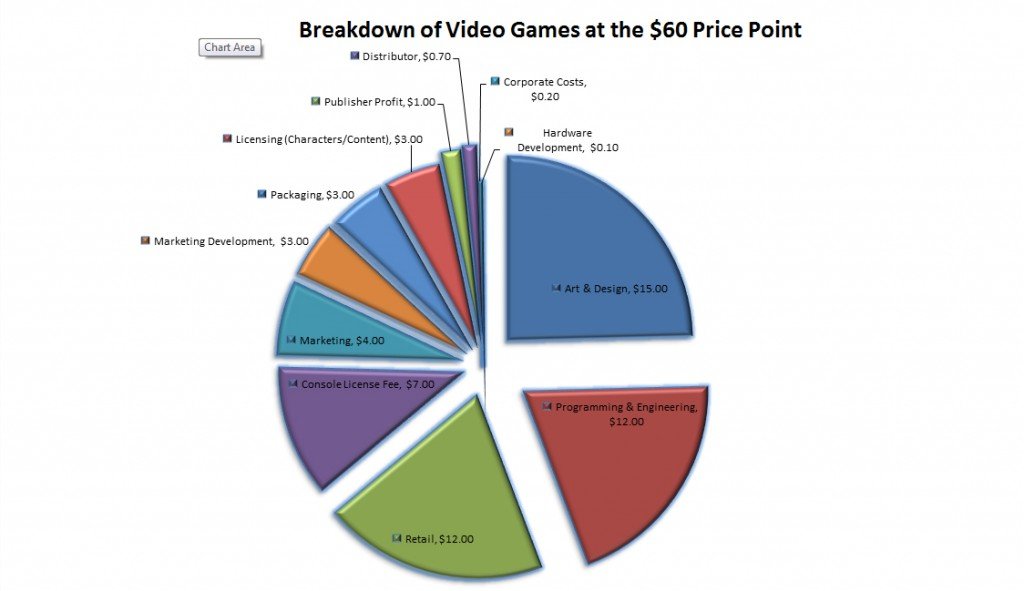 As you can see there are a lot of things that go into a game and there are plenty of hands that take money out of that $60 dollars that you pay every time you want a new game.  Now you see why you pay $60 dollars per game, but we still didn’t get to why those values are where they are and whether that is expensive or not.  The answer is relatively simple and that is video game development costs.  If you saw on the pie chart almost half of the cost of the game comes from Art and Programming.  Those are directly related to the two year development cycle we are currently on.  From the idea to getting the game on the shelf those thousands of man hours are, by far, the costliest part of that $60 bucks.  Take a look at the chart below and it will give you an idea of how things used to be and where they are headed. 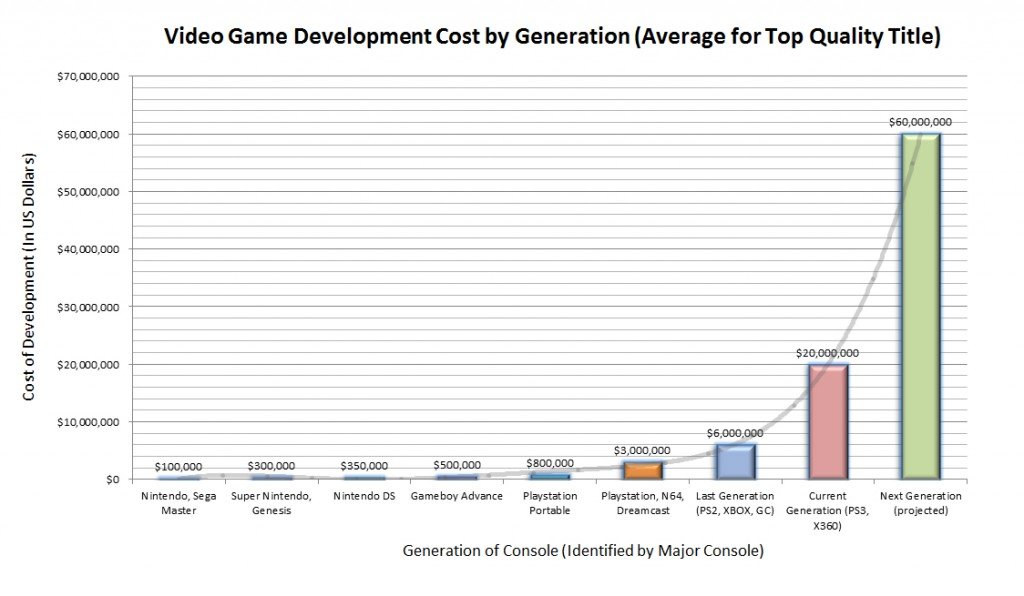 This is really the driving force behind why games are so expensive and how they are set to get even more expensive soon.  I believe that video game companies are using collectors editions as a way to get consumers used to paying more for your video games.  With those editions retailing at $80 dollars and more its not uncommon to see the $60 dollar point going by the wayside.  Namco Bandai president Takeo Takasu said his company needs to sell at least 500,000 copies of each PlayStation 3 game it creates to make a profit and considering that an average video game sells about 600,000 copies or so if it is a decent quality, there isn’t much room for error.  This explains why it is very difficult to start a video game company and why the field is so competitive.  Yet despite video games dancing so close to the sink or swim line they manage to make up an industry worth over $31 Billion dollars.

Generally, I feel that video games are very expensive especially for today’s times.  When you consider that the federal minimum wage is $7.25 an hour, you’d be giving up roughly a third of your paycheck to get one new game.  That is really steep for most people and though I completely understand why they need to charge that, it is still a shame that a hobby that millions of people enjoy is such a difficult hobby to maintain.  Luckily for consumers, video game prices drop quickly so if you have some patience you can enjoy the hobby we all come to love for less than a third of your paycheck.  There are also many retail programs in place that offer rebates and store credit on future game purchases if you purchase one game at full price.  Many of these rebates are up to $20 dollars and sometimes more on larger titles so though the price point is high, some thinking ahead can save you pain of the $60 dollar price point.