Dark Souls II had some pretty big shoes to fill when it was released in early 2014.  The original Dark Souls, which built upon the foundations of the PS3 exclusive Demon’s Souls, was released to an overwhelmingly positive critical and fan response, and has only cultivated a stronger cult fandom in the years since.  Dark Souls II did an admirable job of living up to its great expectations and was a game that New Gamer Nation loved, subtly tweaking the formula of its predecessor and providing more of the masochistic and precise action that endeared fans to the series in the first place.  The three pieces of DLC that From Software has developed following the game’s release – The Crown of the Sunken King, The Crown of the Old Iron King, and the Crown of the Ivory King – stand as some of From’s best work in the entire series, providing memorable set-pieces, brutally well-designed bosses, and another heaping dose of soul-crushing despair.  Often superior to even the original game, all of the DLC is a must-buy for fans – and with next-gen versions of the game coming shortly, there’s no better time to jump back into the world of Drangleic and assume the curse once more. 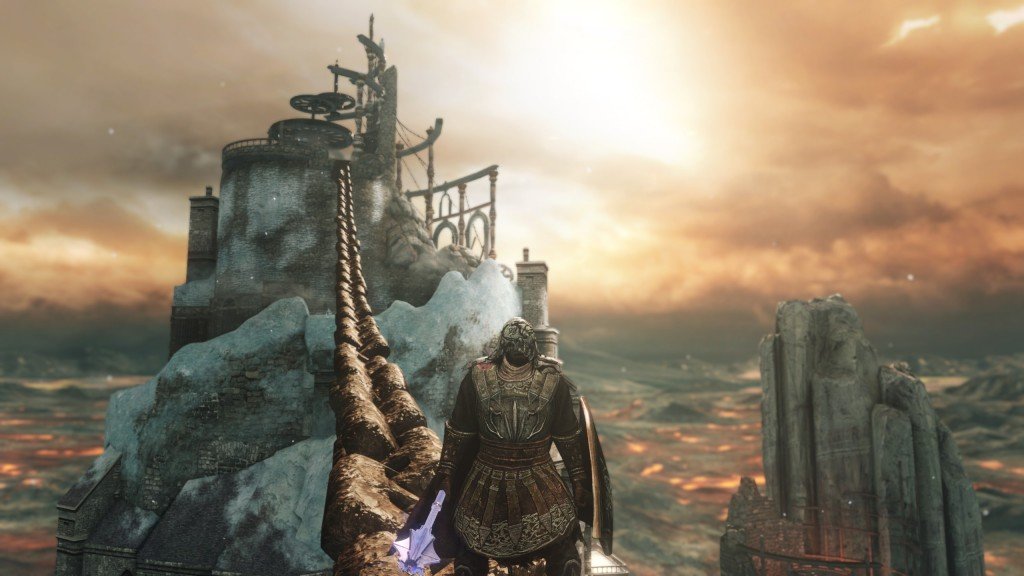 Some of the areas can be downright breath (and life) taking.

Each piece of DLC can be accessed after beating one of the four bosses carrying a “Lord Soul” in the first half of the game, but you’ll probably want to hold off for a while before jumping into the new content if you’re doing a new playthrough.  I had much greater success once I beat the game’s final boss and jumped in at about Soul Level 160; of course, your mileage may vary depending on your build and how experienced you are at rolling out of the way of massive sword swings.  And no, you shouldn’t worry about being “over-levelled”- the new content is, even at this higher level, significantly more difficult than anything in the base game.  Thankfully, the DLC mostly avoids Dark Souls II’s favorite way to add difficulty: pitting you against multiple bosses at once.  What once made the Ornstein and Smough fight so dreaded and special in Dark Souls became overused and stale in its sequel, often feeling “artificially” difficult rather than a skillful challenge.  The bosses in general feel more epic and well thought out than the dearth of oft-forgettable bosses in the original game (I’m looking at you, Covetous Demon), with only three bosses per DLC.  The limited number of fights has lead to an increased difficulty and more elaborate AI for each encounter, often paired with swelling score and gorgeous environment design.

The praise for outstanding level and visual design can be extended to the entirety of the new content.  Each of the downloads will see you progressing through a new themed environment: Crown of the Sunken King sees you descending through the labyrinthine Sanctum City of Shulva, Crown of the Old Iron King has you navigating massive chain-bridges and trap-filled fiery corridors, and Crown of the Ivory King tasks you with battling your way through frigid and blizzard-torn ramparts.  Shulva stands out as the most disappointing of these new areas, but all of them easily stand above some of the base game’s more lackluster levels such as the Shrine of Amana.  While perhaps nothing matches the majesty of Dragon Aerie, the new content is downright beautiful in parts, with stellar art design more than compensating for somewhat dated technical prowess.  The variation nicely compliments the base game’s visual design, and helps prevent any fatigue that may build up due to the sheer scale of content that now exists within the game. 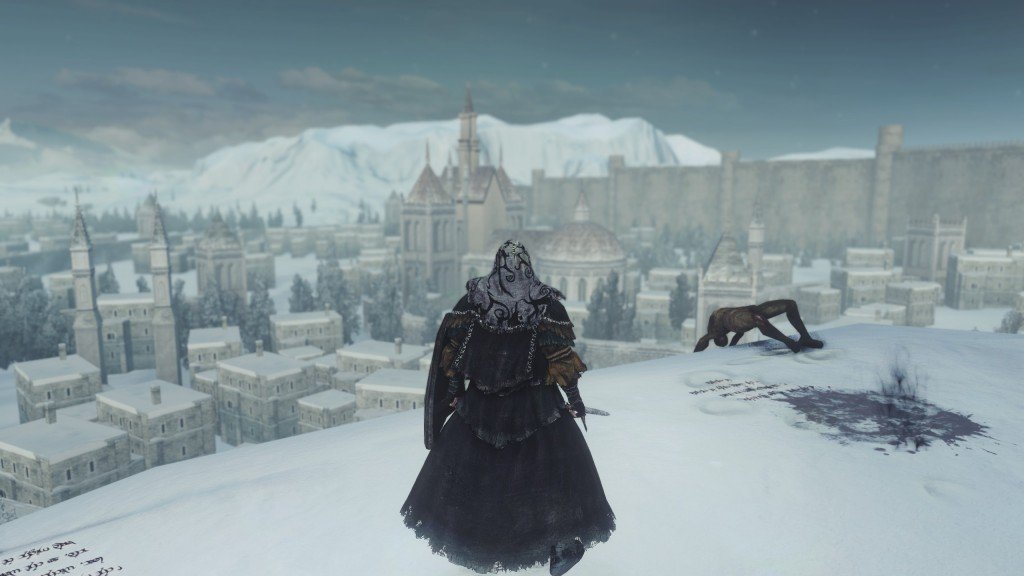 The game’s sadistic streak really shines through in Ivory King.

There are some complaints that can be levelled against the three downloads.  Sunken King sees a return of the myriad switches and buttons that pervaded the Artorias of the Abyss DLC for the original Dark Souls, and they serve mostly as a nuisance that obfuscate your already confusing trek through the sunken city.  The new bosses are clearly designed for online co-operation, as evidenced by the NPC phantom summons available prior to each of the fights.  As the help they provide is nearly non-existent, anyone playing the game offline is going to have a rough time with some of the more difficult battles.  Additionally, the DLC is so clearly divorced from the base game that it contributes to the already disjointed feeling of Dark Souls II’s “open world,” although its integration is markedly better than the absurd series of tasks required to access the Artorias of the Abyss DLC in From’s previous title. 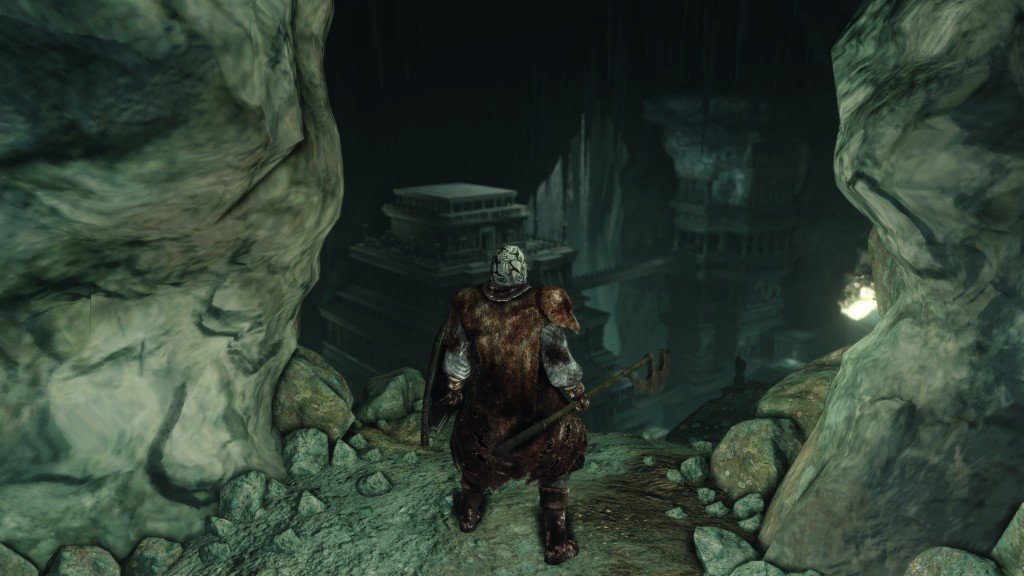 Sunken King is perhaps the most disappointing offering due to its level and visual design.

Despite these minor gripes, From’s downloadable offerings stand as a shining example for the less significant and overpriced DLCs that pervade online marketplaces to aspire to: significant, varied content that builds upon the systems of the game it modifies and makes an already great game better.  My time with the DLC was some of the most rewarding fun that I’ve had playing through any game in a long time, making the DLC a no-brainer purchase for anyone still playing the DirectX 9 PC version of the game or still gaming on old consoles.  For those on new systems or who purchase the DX11 version of the game on PC, which will all have the DLC bundled in, the new content is a great way to spend several hours alternating between self-love and self-loathing.  A strong entry into a beloved franchise, I can only hope that the Dark Souls II DLC trilogy is a reflection of how From Software will continue to listen to criticisms and produce fantastic content in the future.

This review is based on a retail copy of the PC version of the Dark Souls II DLC Season Pass developed by From Software.