Puppeteer is a pretty recognizable game. Its distinguished narrative with whimsically crafted character models sets a new standard as far as story-telling goes. The game is well scripted, well acted, and very well done overall; story-wise that is. Puppeteer brings up an interesting matter when it comes to video games. The presentation is undoubtedly remarkable, but the gameplay isn’t anything to brag about. This leaves us in a sticky situation. How high do we rank a game with incredible presentation, but average gameplay? Guess you have to read on to see.

The story, as previously stated, is indeed remarkable. It’s silly and outrageous, but that’s what makes it so loveable. The concept is pretty fanciful. There was a Moon Goddess that was overthrown by the Moon Bear King, who stole the two moon shards. You play as Kutaro, a poor boy like many before him that has his soul stolen from Earth and brought to the Moon to serve the evil Moon Bear King. Kutaro seems to have even worse luck, because within minutes of the game, he loses his head. Not letting it stop him, he steals the magical scissors, Calibrus, and begins his adventurous journey to save the Moon from the evil Moon Bear King. It’s bizarre, it’s childlike, it’s wondrous, and it’s out-of-this-world.

To match such a magically stunning story, one needs an equally resounding style. Puppeteer succeeds exponentially on this front. The biggest strength by far is the incredible presentation. Everything is vivid and colorful. There was never anything bland or boring throughout this entire game. Every level or character was something new to behold. The different themes varied greatly across the levels to add even more appeal. A starry night to deep in the ocean, it was all memorable in its own way.

What helped this wonderful feeling of childlike awe was the inspirational musical score. It came alive with a deep orchestra, festive music, or whatever would fit the scene best. It egged Kutaro on and became intense in his dangerous escapades. It was uplifting, it was scary, and it was beautiful. It brought the game to life—something that was a reoccurring theme in this game. 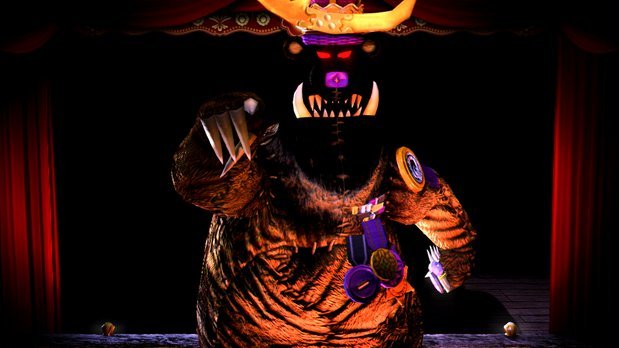 The most spectacular part about Puppeteer is the ability to present itself as though it was being acted out on a stage, and you are sitting in the audience. Even the screen is bordered with curtains and stage lights to give off the faux theatrical mood (it’s not nearly as annoying as you think it would be, don’t worry). That’s only a little extra. It is everything else that really brings out the original theme this game encompasses. There is an audience that cheers for Kutaro while booing the Moon Bear King. They laugh when something funny happens and you will most likely be laughing along with them even at the silliest jokes.

Even the way the characters seem to speak comes with a certain inflection that is reminiscent of a stage production. The characters speak loudly and almost in a monologue format at times, but it isn’t cheesy (not in a bad way at least). It really works well, and you’ll find yourself completely engaged in the work. Most of all, the narrator brings the story to life. As Kutaro battles a creature, you’ll hear the narrator describe the battle with immense passion. It’s lively and invigorating. You feel like you’re playing as the hero of a story, which is what you do in most games, but this time there is an audience riding along with you.

One of the best elements of this game is the way it makes fun of itself. The narrator constantly bickers with the characters as they break the fourth wall. At one point, the narrator got so mad at a character, he wrote her out of the story, and continued to tell it as if she wasn’t there. Another time, Katuro was hit so high in the sky, he hit the scaffolding where the lights hang, and there was a little creature operating them. You’ll find yourself with a goofy grin on your face watching the characters interact. It’s quirky, but it’s all in good fun. It’s really just pure entertainment.

The game is so entertaining and wonderful to witness; it’s a little upsetting that the gameplay isn’t as great as the rest of the game. It’s not horrible by any means, but it’s also not amazing. It’s really just like—ehh. Puppeteer is okay, you won’t hate playing through the game, because you’ll be so wrapped up in the story and characters. It just will never be the gameplay that makes you want to press onwards. There are certainly some cool moments that really will capture your attention, but there are many more moments where it only seems average or worse. 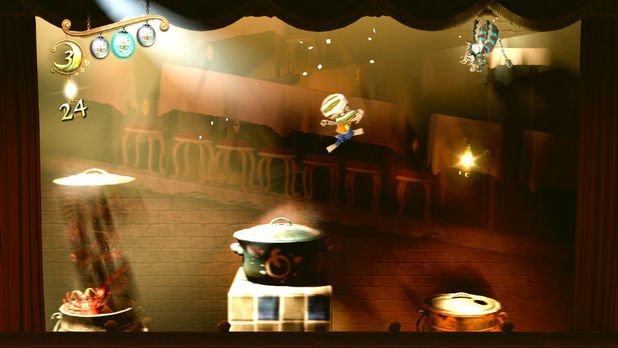 Underneath all the creative presentation, Puppeteer is a pretty basic platformer. The controls are simple: jump or cut, with a few other moves thrown in there. Sometimes jumping can feel slightly delayed or off. Not always, but there were some situations that involved more precision. It doesn’t have any complex puzzles to sort out. Any puzzles there are, are easily figured out within seconds. The game doesn’t carry a fast pace, like other platformers out there. In fact, multiple occasions I perished because I was moving faster than the story. I would have to wait for the narrator to catch up to me, before the environment would change to allow my passage. I would only learn this after plunging forward and dying. This forces you to play the game at their pace, which isn’t a horrible idea, since they are presenting a story. That being said, if I’m flying through a level briskly, I don’t want to have to stop and wait for some dialog or piece to move.

The kids you fight on each level never develop or change—leaving you with repetitious feeling when it comes to battling. Those are only the kids that had their souls stolen by the Moon Bear King (you release their souls by cutting them free with your magical scissors). Unlike the bland soulless kids you fight, the bosses are all exceptionally well done. The Moon Bear King’s twelve general are based off the Chinese Zodiac signs, and each battle is a barrage of attacks with desperate dodges to keep it lively. Generally, you still will have to cut some cloth to weaken them, and then each battle ends in quick-time-events. So, even if they are more varied than the battling you’ll do on each level, they still all end in typically the same way.

The levels are certainly beautiful to look at, but that also means they are crowded. It can be a little hard to see what’s going on at all times. This isn’t a huge negative; it simply means you may die a few times, because you jumped on something thinking it was a platform that wasn’t actually there. In fact, the biggest difficulty I had playing this game, was jumping between two flat platforms. That’s all. One instance, I died at least seven times. Katuro had to grab the edge, but he wasn’t doing it. When it comes to a platformer, this shouldn’t be an issue. The fighting and moving through exotic set-pieces works perfectly fine, but when it comes to the actual platforming elements of this game. It doesn’t do so well. 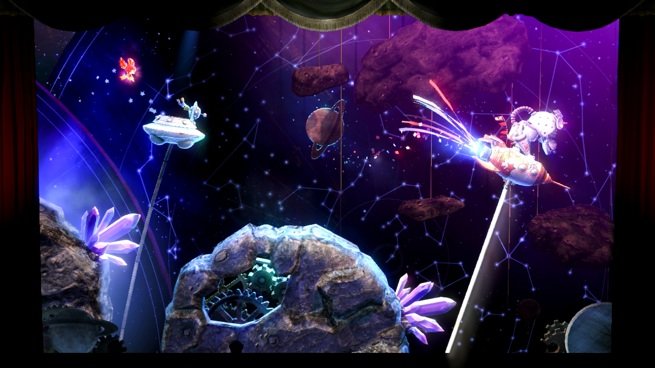 A feature that is great is the ability to switch between heads. It’s not gruesome, due to the fact that everything is a puppet, so it can actually be fairly comical. You can carry three heads at a time, and getting hit causes your head to fall off. You have a brief couple seconds to chase after it before it disappears. Lose all three heads, and then you lose a life. It makes the game a little more forgiving than losing a life anytime you take damage.

More importantly, having these heads are extremely useful in certain situations. Having the proper head on to match an icon in the background will do one of two things. It will either take you to a bonus stage where you can collect tons of gems. Gathering a hundred of these gains you a new life. At other times, having the proper head will assist you in moving forward through the scene. For example: one scene required me to work my way upwards until I hit the goal. There were dozens of traps to avoid on my way up. Luckily, I had the caterpillar head, and by using it, I turned a caterpillar into a butterfly, then road that to the top, bypassing every obstacle. The proper heads can be extremely handy in tricky situations.

Having different heads isn’t the only feature that assists you in tough situations. You also have a floating companion with you at all times that you can control (or a second player can control in co-op). By searching the screen with it, you can uncover all sorts of goodies. Usually more gems, sometimes more heads, and other times they even help bypass enemies. It is imperative you search constantly throughout the game, and you’ll easily fall into that habit anyways. 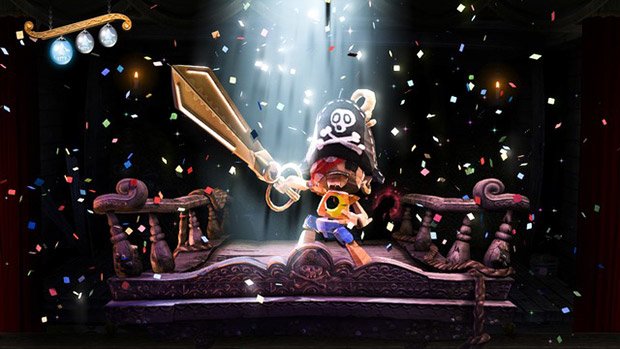 Puppeteer is certainly one of the most charming and whimsical games in recent memory. It’s flashy, fanciful, and will keep your eyes glued to the screen until the very end. It’s creative use of different heads and magical scissors to cut your way through levels is thrilling to experience. This game is a completionists fantasy, with a hundred heads to find, souls to recover, bonus levels to discover, and over sixty trophies to acquire, it will certainly keep you busy. Even if you aren’t into trophies, the story will still run you over eight hours. The small problems with the repetitious gameplay elements mixed with bad platforming basics does decrease the games appeal. Then again, you aren’t really playing Puppeteer for the gameplay, but the experience overall. With that in mind, the presentation does outrank the gameplay when it comes to this particular game, so don’t be foolish enough to pass up this wonderful production.

Did you like this? Share it:
Come One, Come All | Puppeteer Review
Overall Score8
Positives
Negatives
8Overall Score
Reader Rating: (0 Votes)
0.0