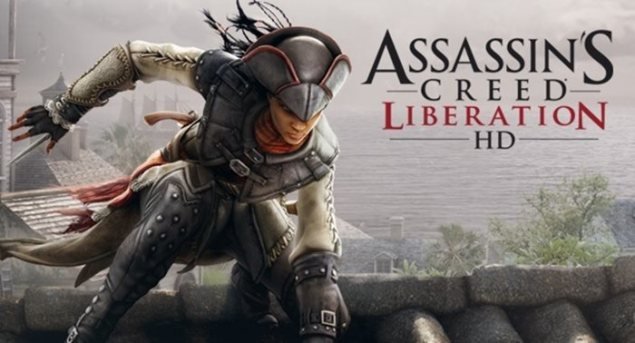 Assassin’s Creed III: Liberation was released the same day as Assassin’s Creed III back in October 2012 for the PlayStation Vita, and now has been ported to the PS3, Xbox 360, and PC. A questionable decision to say the least, especially when Liberation only received average scores when it first released. Now that Liberation is on consoles, it has to compete against the other Assassin’s Creed titles, which is a tall order for a game not designed for the console. The port doesn’t break any new ground in the updated HD version either, and in a franchise as popular as Assassin’s Creed, there isn’t enough in Liberation to warrant playing this title.

Liberation takes place between 1765 and 1777 mostly in New Orleans. The protagonist is a female named Aveline de Grandpré and she is an aristocrat of African-French heritage. Besides a brief prolog of Aveline as a child, she is already an assassin when the game begins. She wishes to free the slaves in New Orleans as the city rejects the Spanish rule that is slowly overtaking it after the French-and-India War. While the premise of the story is interesting and it takes place in a fascinating point in history, from a narrative perspective, the story is one of the weakest in the Assassin’s Creed franchise by far. The individual story of Liberation is bland compared to its contemporaries, and it barely addresses the overall story of Assassins, Templars, and the first-civilization. 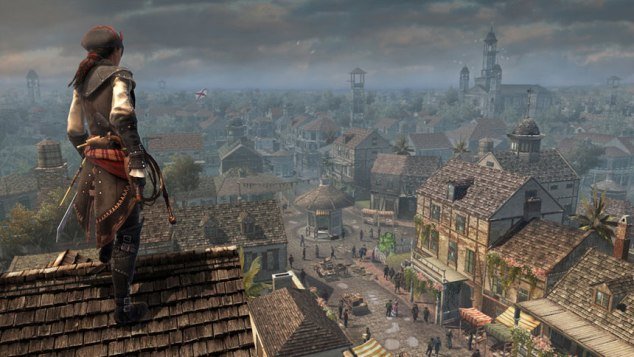 The setup made me anticipate how the game was going to unfold. The issues of freedom where abundant and I was expecting some deeper themes to be addressed. The story never really takes that dive. The segments are disjointed and rushed. There are times such issues are brought up, but they barely connect to the overall series of Templar control versus Assassin freedom. The story focuses more on Aveline herself, which isn’t necessarily bad, but it does it in a way to feel like a melodrama. A man loves her, she doesn’t have time for him, her step-mother is worried about her image, her step-father’s business isn’t doing well, and other such trivialities in the grand scheme of things. When the story does get more serious, there is never any real coherence to suck you in completely.

Even if the story isn’t anything spectacular, Aveline is a good protagonist. She is a strong-willed woman with all the right intentions, but lost in-between two worlds. She is the adopted daughter of high socialites, but wishes to help those enslaved. She tries to follow her mentor’s wisdom, but at times wishes to go down her own path. While Aveline may not be as heroic or interesting as she should be, she does a good job of taking center stage. She is a new take on what most of the Assassin’s Creed protagonist are; loners and rebels with attitude problems that have no ties to anyone.

Aveline has three personas; the aristocratic lady, the assassin, and the slave. She uses all three personas to tackle different obstacles, and each one comes with their own abilities and limitations. For instance, the lady is limited to walking so running and climbing are out of the questions, but she can charm guards to bypass them. The slave can blend in with other slaves to sneak into areas, but only has a limited amount of weapons. Finally, the assassin is the best fighter, but always has some notoriety so stealth is challenging.

There are some instances where you have freedom of choice in who you want to be to complete the mission. When you need to get into a guarded area, you can use the lady to charm the guards, but getting caught in open conflict will put you at a huge disadvantage. You can try climbing in from some rooftops with the assassin, but you will be detected almost instantly, if seen at all. Sadly, there aren’t that many situations where this decision is left up to you. Usually, the game will force you to change into a persona for the mission, which makes sense within the context of the story, but restricts you from a gameplay perspective. A few more missions that give you the choice of choosing a persona would have gone a long way. 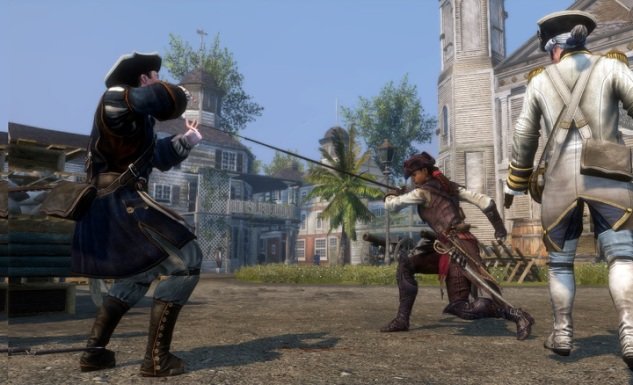 The gameplay is the same as every other Assassin’s Creed game. There is free-running, lots of stealth, and the same close-combat action. For better or worse, there are almost no changes to note of when it comes to the fighting except for the chain-kills. This is when you can kill multiple people with a press of a button. The chain-kills are cool to watch with the way the camera zooms in for an action shot. However, I rarely used the ability. I would rather kill the enemies in real-time to keep the game moving faster.

What Assassin’s Creed is probably best known for is the massive open-worlds that you can explore. Liberation feels considerably smaller, and this is best explained by remembering it was a handheld game first. There are only two main maps: The City of New Orleans, which is acceptable and where you’ll spend almost all your time, and the big, but empty, Louisiana Bayou. This mirrors the frontier in Assassin’s Creed III where running in trees is the best mode of transportation, but that also means it is as annoying as the frontier can be. There are things to collect in the Bayou, but most of the time it is just a matter of traversing through it as quickly as possible to get to the next mission.

I never really felt the need to explore in Liberation. I uncovered both maps without really going too far out of my way. In an Assassin’s Creed game, you can see where the next sequence will start, but get lost in activity on the way there. I never experienced that feeling of getting lost in the extras of this game. There was never enough for me to do. There are things to collect and unlock, but I never felt it was worth my time. Overall, Liberation is the smallest of the Assassin’s Creed series, and when a game is most famously associated with enormous maps. That’s a big negative. 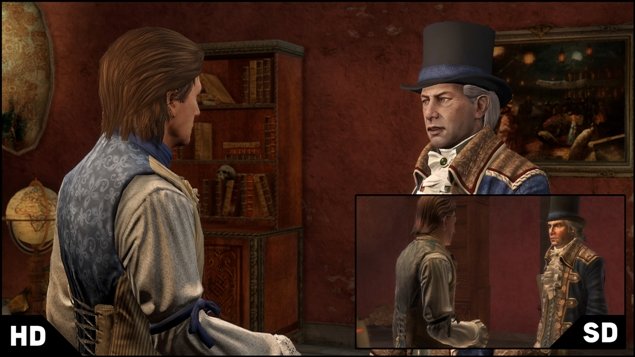 The other thing that Assassin’s Creed is most famously known for is the incredible graphics, and this being an HD port and all, you would expect for some amazing graphics. Well, sadly, they aren’t anything special. Better than the Vita of course, and they aren’t bad either, but they aren’t out-of-this-world. As you can see above, there are more items added in the background to up the production value of a scene, but that isn’t anything that will wow you exactly. The characters’ textures are better when looking at a side-by-side comparison, but they won’t shock you. They look stiff and interact awkwardly most of the time. Besides, the characters aren’t the most important when it comes to graphics. The environment is what is really matters when graphics are being updated, and I can easily say they are nothing special either.

New Orleans is boring and gray with every building looking similar. Climbing to the top of a building doesn’t reward you with a sense of any size or beautiful scenery. The Bayou is covered in fog most of the time, so you can’t see far into the haze. Nothing really stands out as being special or memorable in the scenery. Even the few instances when you leave New Orleans and the Bayou. The locations you find yourself are still tiny, leaving you little to explore, and once again, there are no sights to really see. 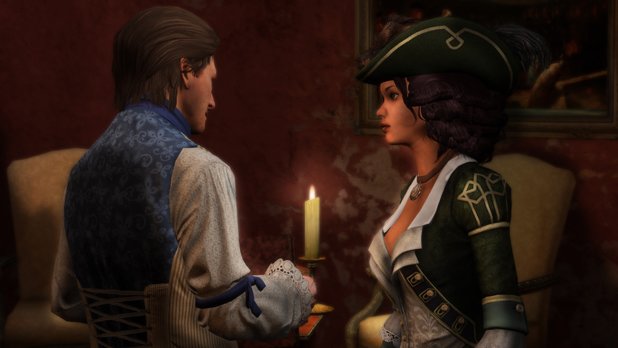 There are also countless bugs that I ran into throughout the entire game. A few times I found myself stuck in the floor and unable to move until I managed to weasel my way out of it. I lost count how many times enemies materialized in front of me. This usually happened at the worst times where I was being stealthy, only to have someone spawn in front of me and blow my cover. I also had more difficulty climbing trees and buildings than any other Assassin’s Creed game. I wasn’t sure if it was the controls or something else. I know I fell through some branches that I was walking on only moments earlier. The game’s bugs break any chance of immersion, and can add-on extra frustration to a game that isn’t exactly doing well to keep your attention anyways.

Reviewing Liberation is tough due to the fact that I wasn’t entirely sure if I should treat it like a handheld game or a console game. It is easy to see that Liberation was a handheld game, and it explains many things, like why the world feels so small. With that said, I decided to treat it like a console game. Now that Liberation is on the console, it is competing against other console games, and it cannot hold up. Before, if you had a Vita, Liberation was your chance to experience the famous Assassin’s Creed franchise on a new platform. Now, playing this on a console probably means you have played the other Assassin’s Creed games, and then Liberation will easily be the worst one you play. 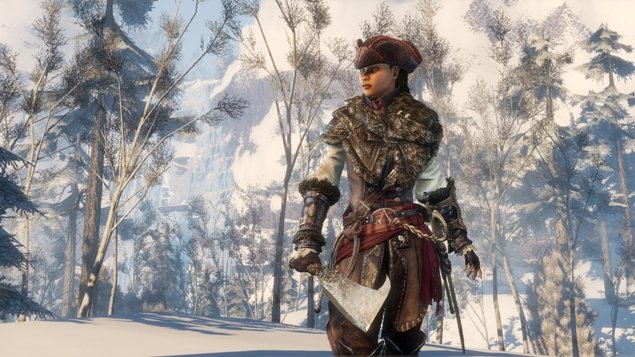 Luckily, this game is priced at $20 USD, and that makes it a little more reasonable to commit to a purchase. The only people who will enjoy this game are the people who love the Assassin’s Creed franchise and want to experience all of it. Even then, this title is a standalone game so it doesn’t feel like it is a part of the franchise. For those out there who don’t have a handheld and thought they missed a game in their favorite franchise; you didn’t. You can easily skip this game without worry, but if you are a true fan of Assassin’s Creed, then you must experience the good with the bad.

This review is based off a review code of the Playstation 3 version of Assassin’s Creed Liberation: HD developed by Ubisoft Sofia and distributed by Ubisoft

Did you like this? Share it:
Can't Quite Make the Leap | Assassin's Creed: Liberation HD Review
Positives
Negatives
6.5Overall Score
Reader Rating: (0 Votes)
0.0