Rocket League is a very simple game with a very basic premise. Hit the ball into the goal. Unlike sports titles with various button combinations to perform moves, Rocket League only has a boost and jump button (aside from gas, break, and steering of course). You hit a button to jump once into the air, and then hit it again to frontflip, backflip, or barrel-roll into the ball. It’s rudimentary in all aspects, but in doing so, it’s incredibly easy for newcomers to pick up. It is only once you start playing for hours on end do you realize how complex and difficult Rocket League can be.

You wouldn’t expect cars racing around in a giant dome after a bouncing ball could be fun, but in complete honesty, it’s a riotous party. It’s a perfect game to play with friends. You’ll constantly be laughing as the absurdity of some matches shine through, but at the same time, you’ll be extremely focused. Few games have managed to get me to have a enjoyable, fun experience while also giving me the satisfaction of a tough competition as Rocket League does. 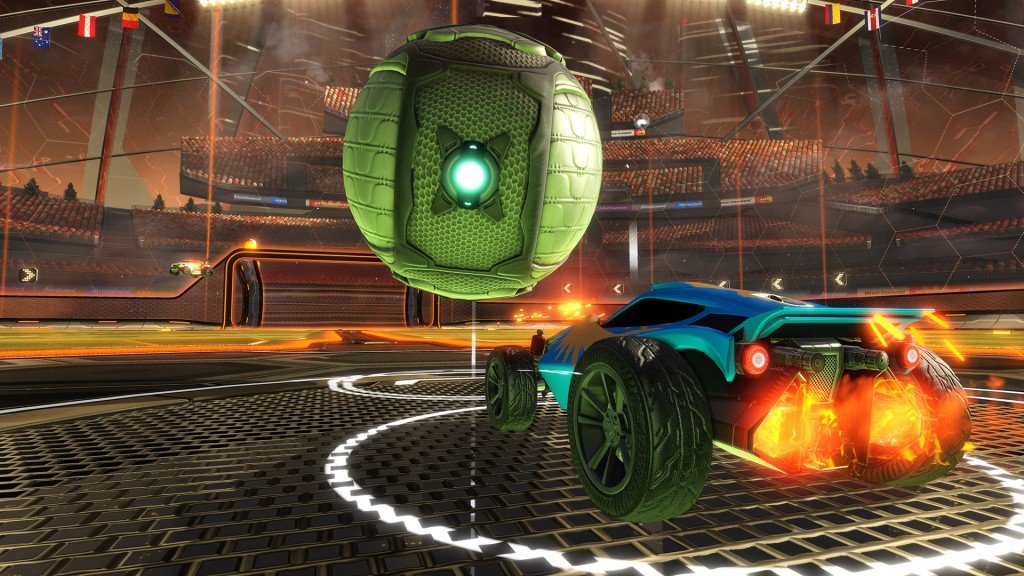 Following the idea of traditional sports game, Rocket League has an offline Season mode where you face off against A.I. It’s a great way to learn how the game works and adjust to the controls. Beginners may find themselves losing more often than winning, but the progression comes eventually. It’s fun taking your team to the top of the league. It’s perfect for people who can’t play online or don’t like to play online.

That being said, Rocket League excels online. There is certainly fun to be had offline, but it’s not nearly as rewarding as competing against other humans. You need to play on All-star to really get the A.I. performing on an acceptable level, but even that still doesn’t feel real enough. As in most games, you eventually learn how the A.I. thinks, and then Rocket League becomes predictable. Trust me when I said Rocket League is as great as it is because of the unpredictability of playing against real people. So even though offline mode is a welcome feature and does its job, you want to play online as soon as you can. 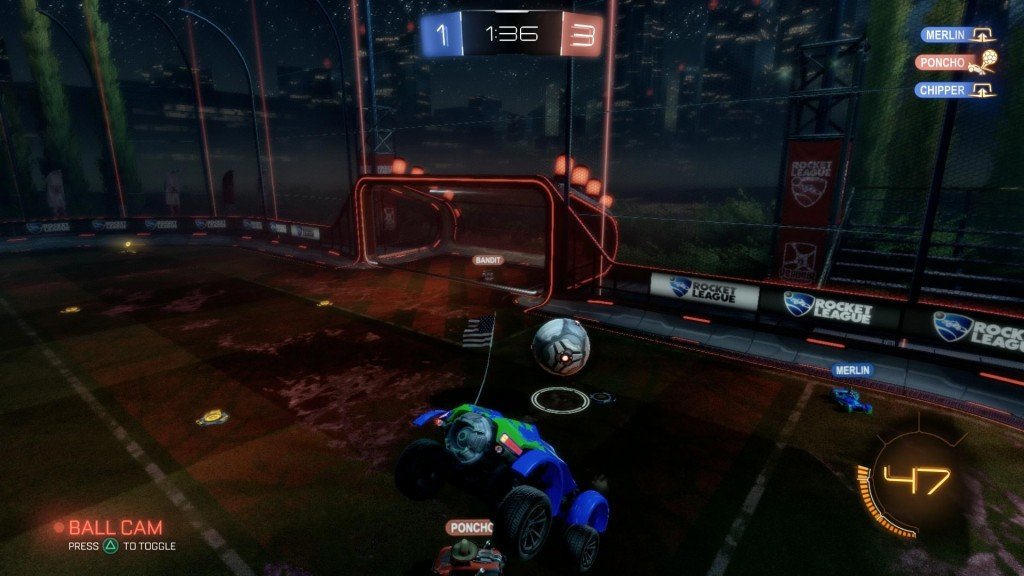 Online is where Rocket League shines in its randomness and sheer excitement when coming out on top. Working with real people is as fun as frustrating. Everyone knows what it’s like to work in a team. Some people do well, others don’t. You have to play together no matter what. This can be applied to any game with multiplayer, but really Rocket League needs teamwork. One person can single-handedly win a Call of Duty match, but you can only do so much in Rocket League. Likewise, if everyone is doing their own thing on your team, it’s not going to end well.

There is a chat box that you can type into or use some of the designated short commands. When my teammate says they’ll defend, I know I can go on an all-out attack without worrying about the goal being open. When someone says “I got it!” I know they have a shot lined up and I should get out of their way. These quick commands have led to more communication in a five minute car-soccer match than all my FPS matches put together.

Naturally you also get sarcastic statements from the other team when you miss a save and the whole opposing team selects “What a save!” It only made me more determined to make up for my mistake. It’s also incredible rewarding when you score an extremely skilled goal and everyone (even on the other team) congratulates you on it. There may not technically be anything wrong with a silent lobby, but when each team is talkative it makes for a much more entertaining match. 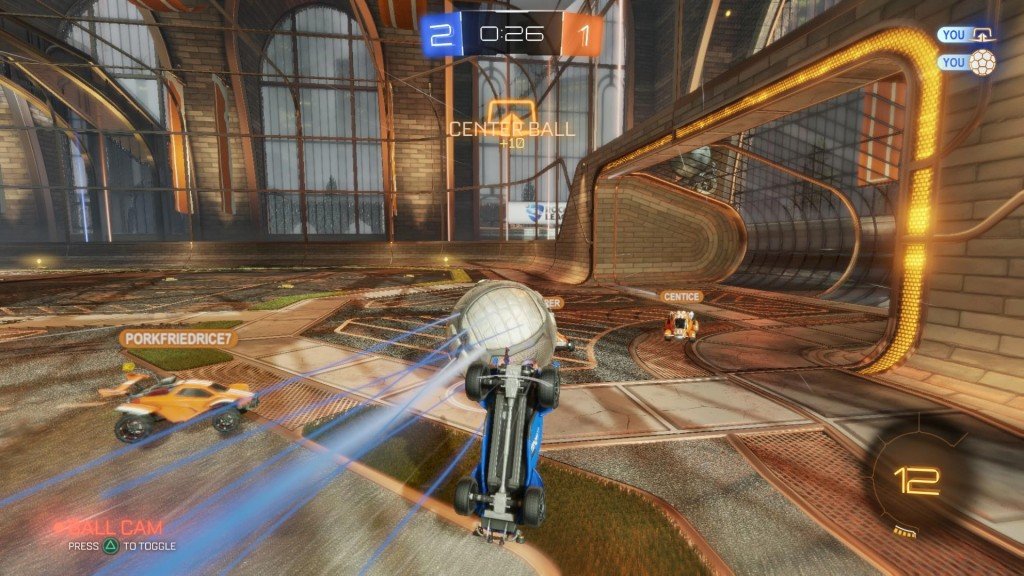 The brilliance of these small matches that I never expected is learning about the people you are playing with. Not in real life or anything actually about them, but they are revealed through their playstyle. I played half a dozen matches with the same 5 people and we kept switching team. I was scoring often, but there was a goalie on the other team that would save maybe 60% of my shots. When we ended up on the same team, he wrote “thank god I don’t have to save your shots anymore.” I laughed responding I was glad I wasn’t dealing with him anymore either.

There are these short bonds that spring up among the team for even just a couple matches. Laughing (or crying) when you score on your own goal, and your team shouting “Noooo!” when you get scored on with less than 3 seconds makes what would be frustrating moments a surprisingly enjoyable experience. Getting in a good lobby in Rocket League reminds me of finding a fun party in Destiny or some other real MMO. I never expected to connect with my teammates or the opposing team, but that little tiny chat box made Rocket League infinitely more enjoyable.

Don’t get me wrong and say all the fun of Rocket League is messing around in a chat box. Car-soccer is serious business guys. I say that jokingly, but I get way more passionate with Rocket League than any other sports game I play. The matches can be so intense your hands will hurt from gripping the control so hard. The struggle of fighting for the ball in the corner or making a break away as the timer counts down will never get old.

How can such a simple game be so intense? Mainly due to how complex Rocket League actually is once you get passed the basics. My jaw hit the floor the first time I saw someone use their speed boost as a rocket engine and launch into the sky to slam the ball downwards at the goal. I never thought about using my boost to literally fly my car.

Making a solid aerial hit is not easy and you will often see people struggling to land them. However, take a peek at the Rocket League subreddit and you will see how skilled some players really are (Like this guy or how about this guy. They make it look easy, it’s really not). The gameplay may be simple so newbies can join in the fun without a tough learning curve, but it also allows the real pros to dominate a match when they reveal what true skill is. 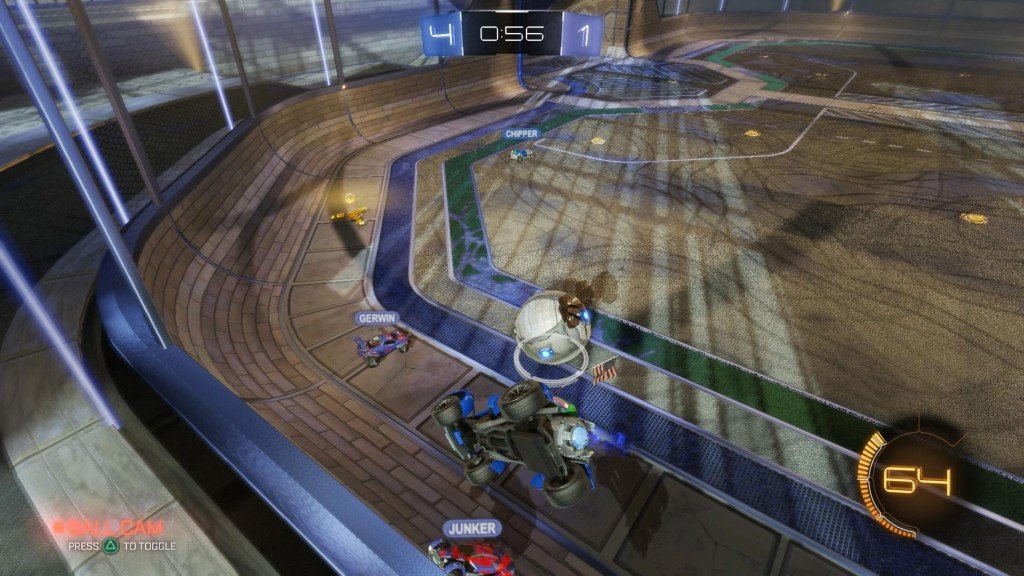 The gameplay may be basic but the engine certainly is not. Rocket League uses the Unreal Engine 3 so the physics are as accurate as possible. This means you can predict the bounces, get proper angle hits, and of course, watch as you hit the ball in the complete opposite direction because you didn’t spin your car properly.

Not to mention the game is shockingly pretty to look at. The color pallet is vivid and the action is intensified by the whirling speeds and colorful explosions. It sounds silly when it’s about cars hitting a giant ball repeatedly, but it’s the small details that can really sell a game. Like how the turf sways in the wind, or how the screen shakes when you rev your engine. Even the crowd will cheer and chant. It has everything you want in a real sport title to sell the atmosphere.

Nothing makes it feel more like a real sports title than wearing a pirate hat on top of your car and boosting out rainbows from the exhaust of your car. Okay, maybe not. Rocket League boosts over a billion combinations, and while they are completely cosmetic and have no effect on the gameplay, they are lots of fun to unlock. You can change pretty much anything about your car. The tires, color, boost cloud color, antenna, so on and so forth. It gives that individualization that we all crave when we play a game and I can report Psyonix delivers.

The biggest issue I have with Rocket League are the servers currently. They have been getting better, but I still am having trouble getting into a match. Sometimes it’s completely fine and other times it is impossible. Then when I connect the servers can be a little unstable (to be fair, my internet could be partly to blame). As I stated earlier, online play is where Rocket League shines so being stuck playing offline is a little upsetting. Psyonix is working round the clock to fix any issues so hopefully within a week they are all gone. 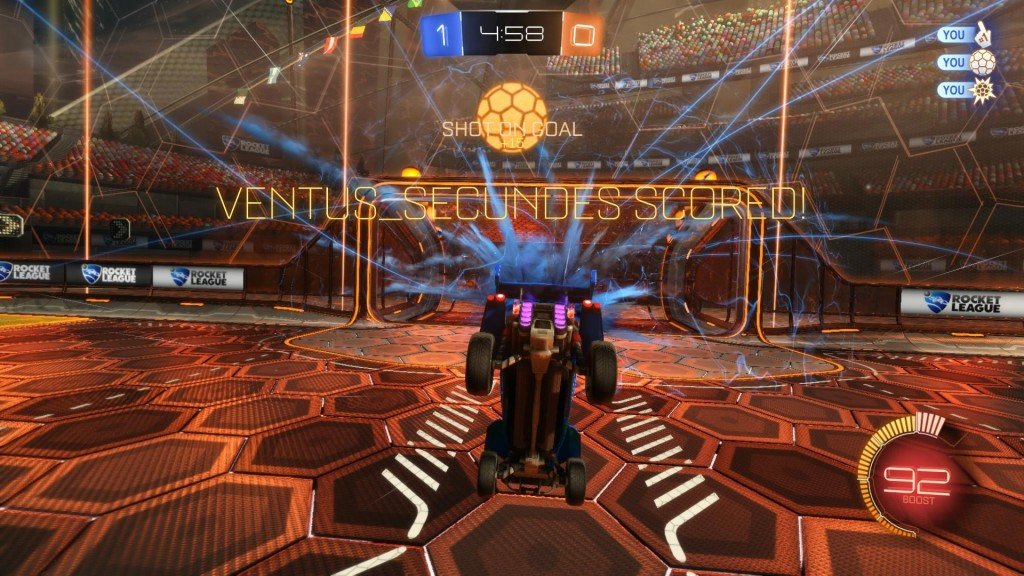 Rocket League is a silly game that excels on its chaos online. I never thought I would have as much fun as I am front-fliping a car at break-neck speeds hoping to slam the ball into the goal—but I am. Scoring a goal with the cooperation of your teammates feels more rewarding than you’d ever expect. Making a save to see the chat box explode with compliments will always bring a smile to your face. The short matches are the perfect length to keep up the intensity, where you always feel the timer counting down. Before you know it, the next match starts and you think, “One more game wouldn’t hurt.” This is how hours go by playing the most addictive game in a long time. I cannot love this game anymore, minus the servers being more stable of course. That will undoubtedly come in time, and then, Rocket League will be the silliest, toughest, most downright fun game to play with friends or randoms online. Do yourself a favor and get this game immediately.

This review is based off a retail copy of the Playstation 4 version of Rocket League developed and distributed by Psyonix.