The WWE Universe is a colorful world full of larger than life personalities. WWE fans are used to seeing their favorite superstars in the ring, but occasionally, WWE takes that action outside the ring. WWE Immortals goes from your consoles to your phone or tablet. Does WWE Immortals a knock out or is this action best suited for a ring? Get ready to clear up your touch screens, it’s time for a review. 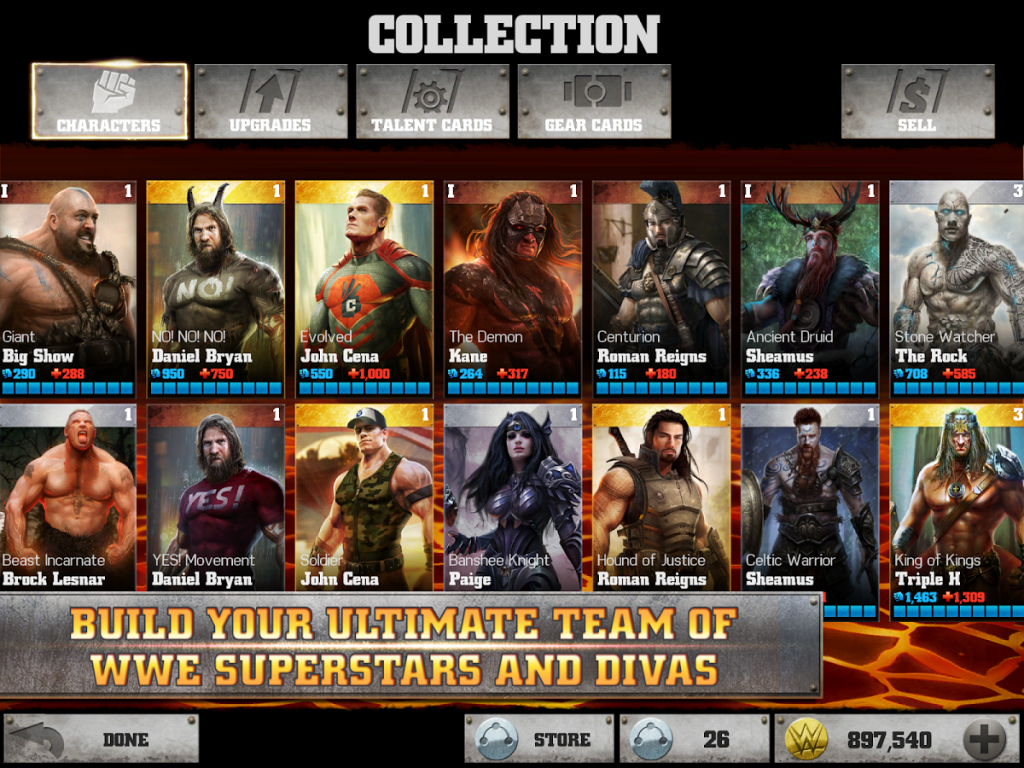 WWE Immortals is a 3 on 3 fighting game that gives a little background as to why most of the roster of filled with altered versions of their real life counterparts…Or as close to “real life” as the WWE Universe can be. It’s revealed that Bray Wyatt has found a mystical lantern and just before he can unlock its dark power, he’s betrayed by The Authority. Unfortunately, they don’t know just how powerful the lantern is and it opened up alternate universes where the WWE Superstars are mages, warriors, and superheroes. The story is convoluted, but it’s a good enough reason to use a wildly altered versions of their counterparts. It also gives reason why there are different versions of the same characters.

Utilizing the touch screen for mobile platforms, the fighting in the game is very simple to pick up and play. Tapping and swiping across the screen initiates offense, placing two fingers on the screen blocks the opponent. Players are also given a momentum bar that represents signature and finishing moves that can do a lot of damage on the opponents. To add extra damage, the player has to tap on certain spots on the screen or swipe a certain direction. There isn’t much more than that in the game, making this more of a brawler than a traditional fighting game with in-game strategy and super-moves. Trying to figure out the timing of when to do everything is where the real challenge for the player begins, especially in harder levels. There are some levels that add challenges throughout each level and that helps make the game a bit more interesting and add a little bit of a challenge at times. 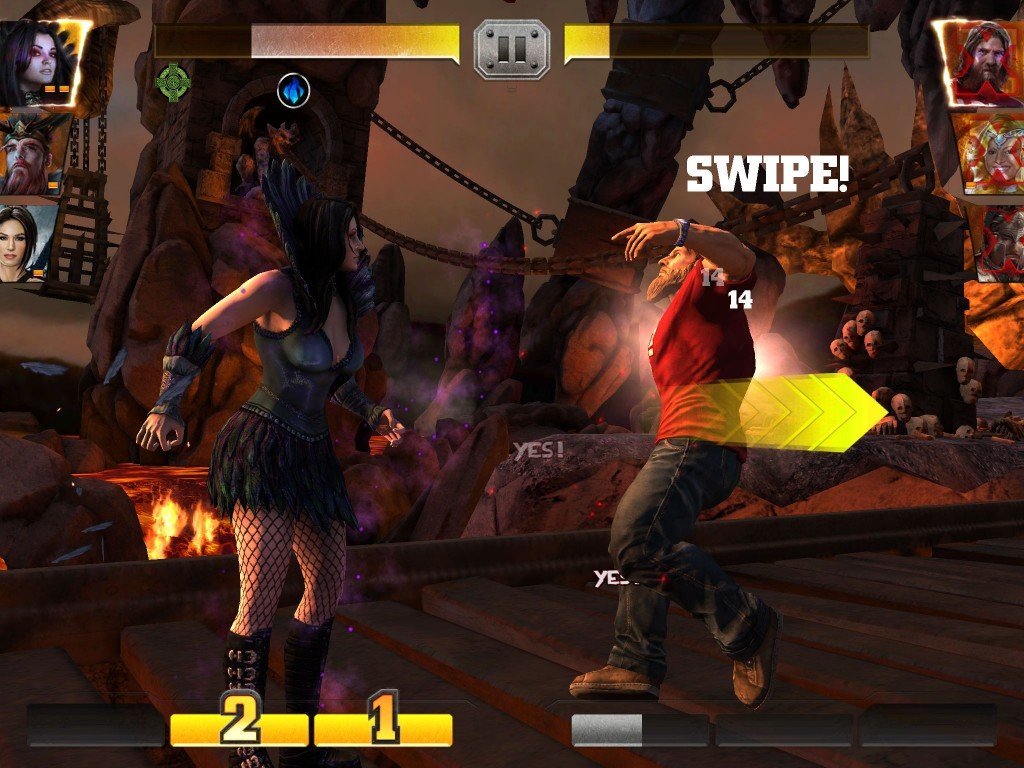 Brawl For It All.

After every fight players earn credits to spend on stat cards for characters, adding offense to characters, or even adding new characters to their roster. Players will start off with three characters, that use up energy with each fight, so swapping them out to rest them starts opening up other options and a little strategy for the game. Adding cards will boost some attributes in characters or the members of the team. One nice thing about new members being added to your team is they get a boost in experience points to level up to catch up to the rest of the team on higher levels. With increased levels come boost in their stats as well as the ability to unlock more signature and finishing moves.

On the surface WWE Immortals looks like a simplified fighting game, but there is a little strategy involved. Each character has a set of attributes that boost the team or themselves. Adding to the strategy of the game, teams can be placed with either allies and/or rivals. Allies help build the momentum faster, while rivals add more offensive power at the cost of defense. As mentioned, there will be some grinding involved, but mixing things up with other characters breaks up some of the monotony. 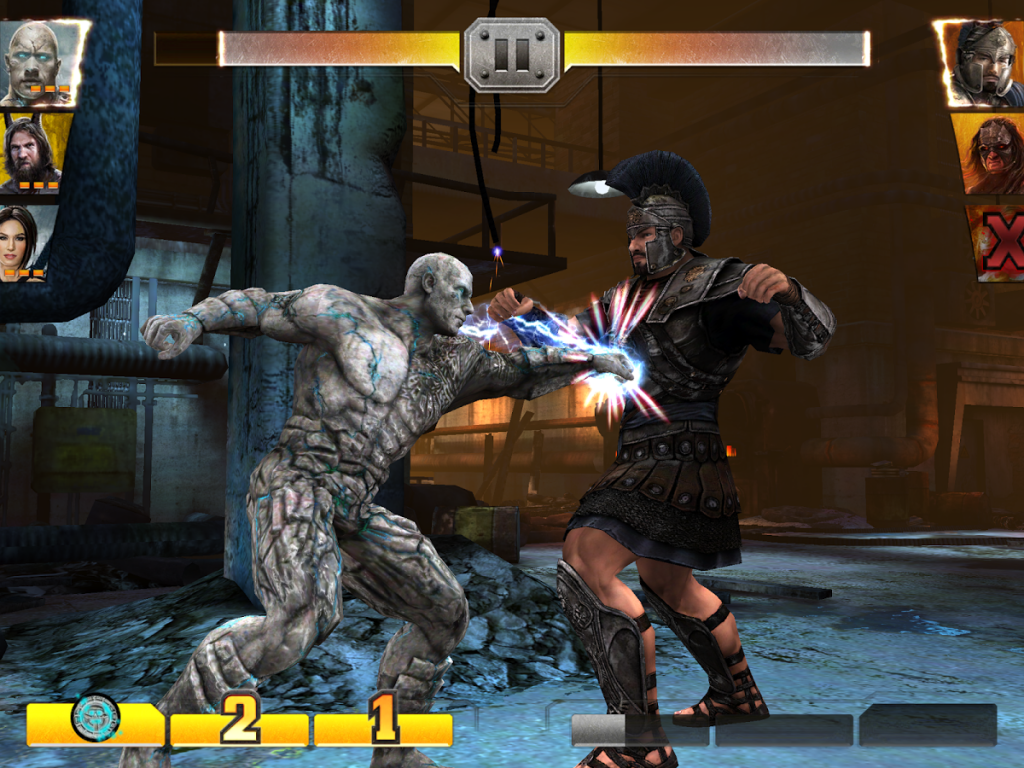 While the stages and characters might be limited in number, there is a good amount of care that went into making everything look pretty good on your device. There were a few minor issues that came up when characters were phasing through some stages and each other, but nothing that broke the game. Being that WWE Immortals is a free game (which shouldn’t hurt anyone’s wallets) the player has one of two choices to unlock items in the game; either play and grind or use real world money to earn credits to use in the game. Earning new characters and items can keep players engaged, but the overall gameplay lacks an overall reward to the challenges that come in the game.

If you’re looking for a good fighting game on your phone or tablet, WWE Immortals is worth the time to download and play. WWE fans would enjoy the over-the-top manner in which this game is played. on some of their favorite superstars and legends. Being that the game is developed by Netherrealm Studios, even avid fighting game fans would enjoy this title. Of course it helps a little if you enjoy the WWE but it isn’t necessary. The simple gameplay is easy enough for anyone to pick up and play. Being that it is a free game, there’s little to no risk as far as investment in time and money…Unless the player chooses to invest one or both into the game.

Final Verdict: WWE Immortals gets 8 Necromancer Undertakers out of 10.

This review is based off a retail version of the Android version of WWE Immortals developed by Netherrealm Studios and published by Warner Brothers Interactive Entertainment.

Did you like this? Share it:
Beyond The Ring | WWE Immortals Review
Overall Score8
Positives
Negatives
8Overall Score
Reader Rating: (3 Votes)
7.2