With regards to games with punishing difficulty, it’s interesting to see certain games like the recent From Soft’s Bloodborne take off in popularity given the developer’s notorious reputation for brutally punishing it’s players for making even the slightest mistake and then having all of their precious hard earned progress instantly taken away, only to have them do it all over again until they learn to do it right. The Awakened Fate Ultimatum a roguelike role-playing game made by Nippon Ichi isn’t exactly a Souls game, but in a lot of ways it sort of is. As I played through the game over the last few days, dying repeatedly and losing all of my inventory and weapons again and again, I couldn’t help but find the more punishing aspect of the game made me want to play smarter, more tactical, and approach everything more cautiously and meticulously each new time and in this way made getting through to the end of any one of the many difficult dungeons a reward in itself– and also made it feel a lot more like a Souls game. 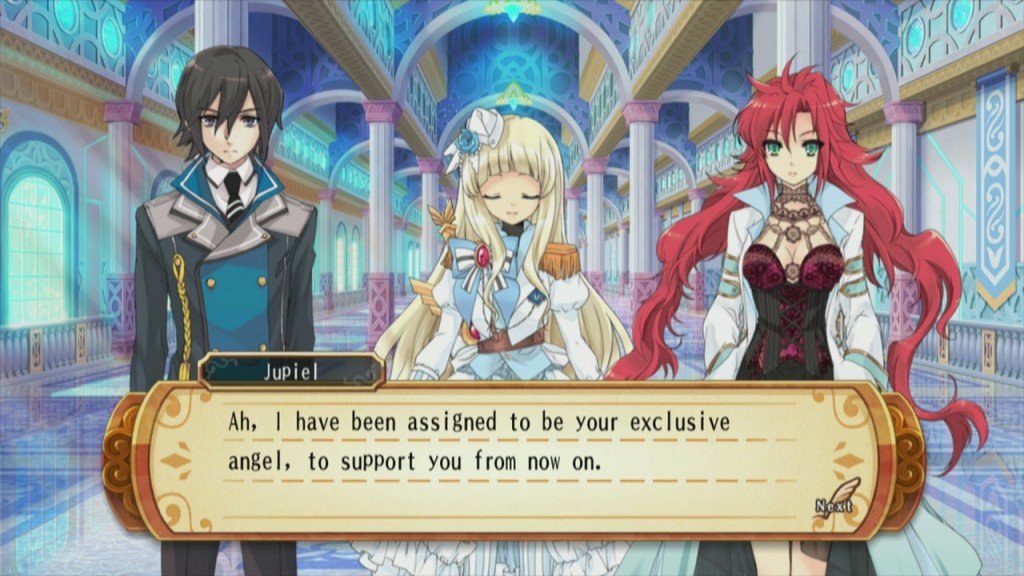 Ultimatum is actually more reminiscent of dungeon crawling roguelikes similar to Pokemon Mystery Dungeon, Shiren the Wanderer or Z.H.P. Unlosing Ranger VS Darkdeath Evilman wherein the main objective of the game is to survive through randomly generated dungeons, and try to get through as many enemy and trap filled floors as possible with whatever randomly generated items and equipment you find along the way. If you die, you lose all of your items and progress and start over again from the beginning—very brutal!  Interestingly, while Ultimatum shares a lot in common with typical roguelike game design, it also tries to make the game more approachable with features of its own. Namely, it allows you storage to save items and weapons you find while farming through a replayed dungeon—something that you will be doing a lot of, and also allows you to keep experience points you earned through the dungeon which allows you to increase your character level and stats. While this feature might make the game seem more approachable at first, the game gets pretty challenging very quickly. Death often comes down to a one-on-one death match when you find yourself low on health and without any restorative items left in your inventory.

Exploration and combat is pretty intuitive and straight forward, very similar to most role-playing games. Environments are made up of dungeons maps, which are randomly generated mazes spanning many floors, populated with traps and enemies, and they will always be different even when you replay them, including the placement of enemies, items and exit gates. Movement is tile-based, and combat is turn-based, like in most typical role-playing games and features a semi-top down camera perspective.  Apart from monitoring your Health Gauge and Special Attack Gauge, you also have an Activity Gauge that drains as you explore each dungeon, which you have to replenish with food items. If it runs out, you will start to lose health points. This limits the amount of time you can explore in each dungeon, and helps push you forward in search of the exit gate. Your Health Gauge and Special Attack Gauge replenish over time when you move around, or by using restorative items from your inventory. 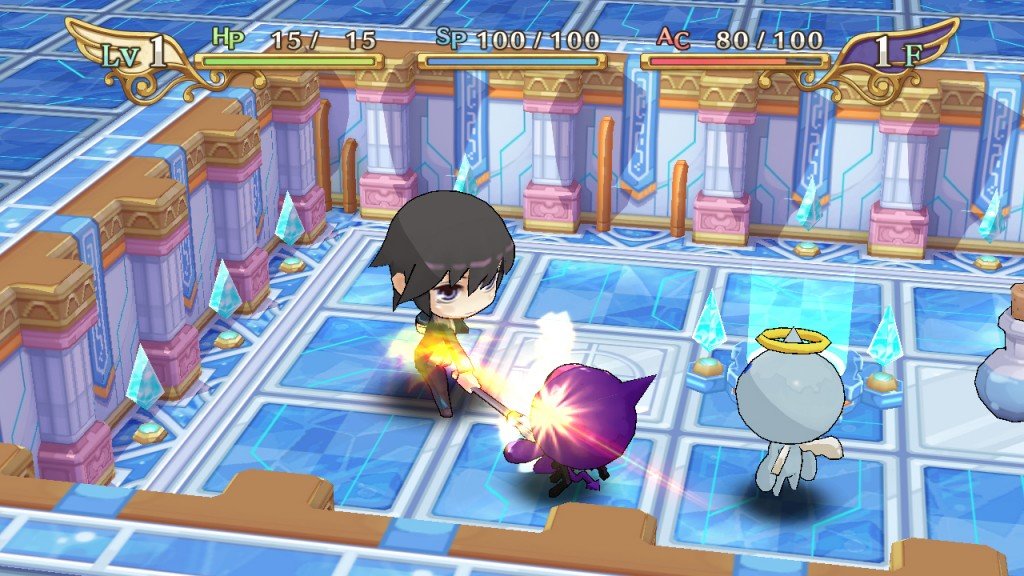 While the combat is pretty straight forward, the game still offers customization options. For starters, you can upgrade and craft better weapons and armor from the items you find in the game. Of course, you’ll want to retread through previous dungeons to harvest materials to do this, but the trade-off is that you risk losing your newly designed upgraded weapons while exploring the dungeons, especially if you’re under powered. The games other main feature is the use of light and dark attack abilities. The main character of the game, Shin Kamikaze can tap into his God-like power which allows him to transform into either angel or devil form to use super abilities, which give a boost to his attacks against enemies of the opposite form. Enemies with halos over their heads are weak to Devil attacks, and enemies with horns are weak to Angel attacks. You can unlock new ‘Deitize’ attacks, what the game refers to as angel and devil abilities, by earning angel and devil points rewarded through story events.

While the stand-alone core game play is pretty solid and offers more than a good challenge, replay value and customization options, the way that the story is embedded into character progression creates somewhat of a detriment. For better or worse, this game has a lot of story to tell. As the story goes, the main protagonist, Shin Kamikaze, a young guy and social outcast, is one day attacked and killed by devils, but his body is spirited away to another world called Celestia by an angel named Jupey and resurrected with the help of a scientist, named Ariael who has given him the power of a God through ‘The Fate Awakening Crystal’ which she implanted in him.   As it turns out, Shin finds himself in the middle of a war between angels and devils and as a God, is expected to make ultimate decisions that affect everyone’s fate, thus granting him either angel or devil points after each decision which affect his characters stats. The majority of the story is done through visual novel style static Anime images with English voice-acting, or you can choose Japanese language in the menu and you also get cut-scenes during dungeon exploration. Moral decisions, while an interesting way to freshen up the narrative, don’t affect the gameplay or story too much. Regardless of what decisions you make, the game still follows a pretty linear plot, but doesn’t take away from an otherwise good challenging game.