Originally a Vita game, Sword Art Online Re: Hollow Fragment is a up-res version of the Vita original with new online play and slightly enhanced graphics. While there’s definitely a strong foundation for a fun RPG underneath, many design choices hold the game back, and some of the translation from Vita to PS4 doesn’t work on the latter platform.

Sword Art Online follows Kirito, a boy who, along with 9,999 other gamers, get trapped in a virtual reality word known as Sword Art Online. During the first day of the VRMMORPG, the game’s creator announces to the players that they cannot log out. Dying in the game will kill you in real life, and if someone from the real world tries to remove the virtual reality set from the player, a signal will be sent through the headset that will kill the player. Most of that is brushed to the side other than the overall goal of beating all of the 100 levels in the game which will allow the players to leave the game. 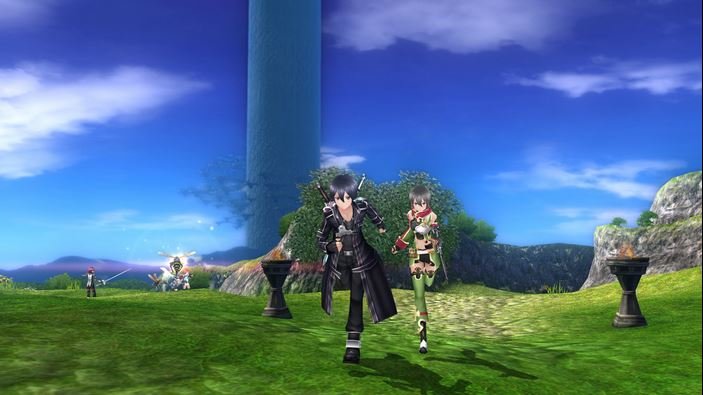 Sword Art Online Re: Hollow Fragment starts off near the end of the anime’s first season. You’ll play as Kirito (sort of – more on that later) and, along with his allies, you must investigate an unknown new area as well as moving high up in the games floor system. You’ll be hunting down enemies throughout all the areas, and in each floor, you must fight the floor boss, which you’ll need to collect info on to fight with your guild.

Within the game you’ll do your basic RPG fighting, but what shines in Sword Art Online Re: Hollow Fragment’s combat is its ability to incorporate elements of the show into the actual gameplay. If you watch the anime, the characters often talk about “switching out” so one character backs off while the other takes the aggro during which the other player recovers. What’s refreshing about Re: Hollow Fragment is that is blends some more traditional RPG elements with some MMORPG elements like cooldowns and using talent trees to unlock powers through skill points.

Re: Hollow Fragment doesn’t do a great job of holding your hand through the beginning and it can seem like you’re just thrust into the game without much explanation of how the combat works or how to navigate through the world. Luckily, eventually all the parts come together, though I still have trouble navigating through the world as almost no area is marked on the map by name and some quests will refer to areas by name directly. 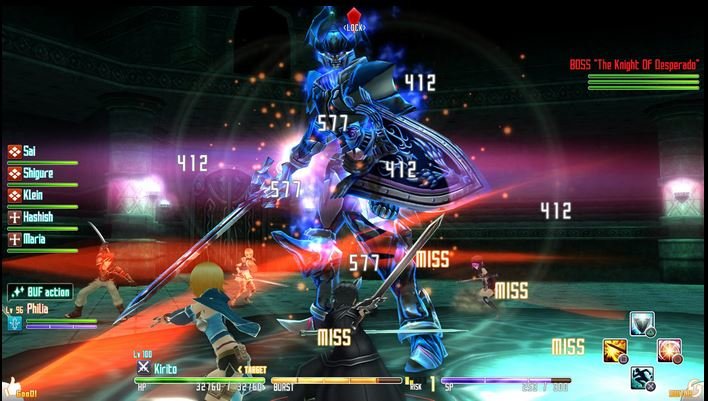 The most perplexing design choice of Re: Hollow Fragment is its character creation. You can customize your character’s voice, looks, sex and name – everything you’d expect from an RPG. The oddity here is that you’re still playing as the hero Kirito in the universe. So, say you’re a female with long red hair, a high pitch voice and green eyes, during cutscenes your character will go back to looking like Kirito from the show. It seems like an unnecessary decision to give customization to players if it’s strictly through gameplay and not the narrative. It’s interesting that Re: Hollow Fragment doesn’t just have us play as Kirito, or if the need for customization was so necessary just letting us have our own character in the universe.

Understandably so, the visuals are subpar as far as PlayStation 4 games go, because this is a Vita re-master. A lot of the edges have been cleaned up, but playing on a big screen really stretches out the models that are meant to be on a Vita’s compact screen. Environments that were easy to overlook on a smaller screen are edgy and lifeless on a big screen. What saves the game a bit are the vast amount of colors used – especially in character models. Keeping in mind this is a Vita re-master helps put the visuals in perspective – just don’t expect to be flexing your PS4’s muscle.

The animated cutscenes within Re: Hollow Fragment look incredible. The blend between drawn anime and 3D modeling is impressive, and the action scenes look great. You won’t find Bryce Papenbrook or any of the other cast members from the English dub. This is entirely the Japanese voice cast, but if you’re cool with that, you’ll enjoy what they bring to the table.

It may not be the most frustrating aspect of Re: Hollow Fragment, but in order to save your game, you’ll need to leave an area first. Frankly, it’s cumbersome and obnoxious. Only having an autosave function in place is just another design flaw that sets the game back and makes the final taste before quitting the game a sour one. 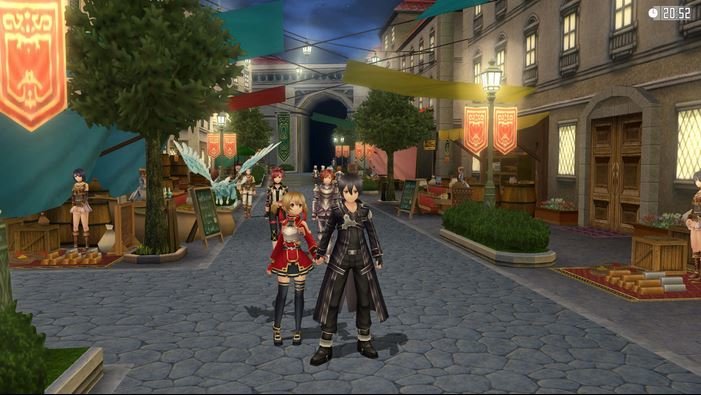 Sword Art Online Re: Hollow Fragment is a promising title that can’t shake the feeling of being a portable game. Some odd design choices that fit on the Vita version feel awkward when played on PS4. As a fan of the anime, it was a little easier to swallow some of the shortcomings, but as a newcomer looking for a fresh RPG, you may find the issues more glaring and impossible to overlook.

This review is based on a review copy provided by the publisher.

Did you like this? Share it:
Back into the Game | Sword Art Online Re: Hollow Fragment Review
Overall6
Positives
Negatives
6Overall Score
Reader Rating: (0 Votes)
0.0