It is incredibly rare to find a game so nostalgic and yet so refreshingly new at the same time. Axiom Verge is just that. We first got to see Axiom Verge a few weeks ago up in Boston at PAX East 2015. I was able to get hand’s on with the game and talk to the man behind it all, Thomas Happ. Bear in mind that when I say, “Man behind it all”, I do not use the phrase lightly. Thomas Happ is the sole developer, did all the art in the game, handled the game design, and did all the music. With having done a full play through of the game, allow me to indulge you with my findings. 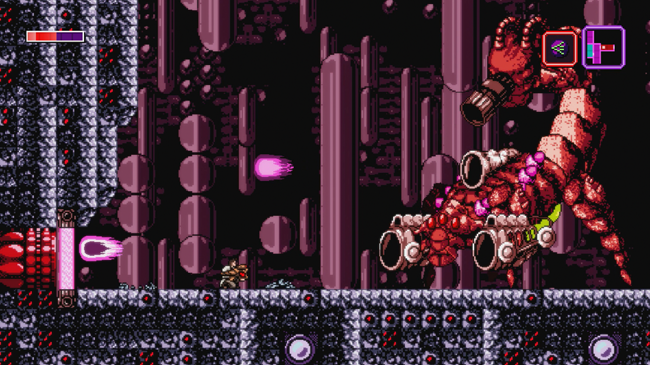 The game opens with you playing as a scientist named Trace who had worked on an experiment gone wrong and awoke in a new mysterious environment, the planet Sudra. Greeted by a mysterious voice in his head he is directed to the next room to pick up the first of many guns you will encounter on your journey. To be fair the story in Axiom Verge is interesting but there are such long stretches of game play and exploration where there is little to no mention of anything at all, that it almost seems “too little, too late”, which is actually quite a shame. That being said, as I reminisce about the games that Axiom Verge plays tribute to (most notably Super Metroid), how much story was really present?

Let’s face it though. You aren’t going to play this game for its story. Sure there are some intriguing moments, plot twists and such, but it’s the gameplay that keeps me thirsting for more. At its core Axiom Verge is an action platformer with an insane amount of exploration. The impressive map is riddled with hidden rooms, power-ups, weapons, and item boosts. The retro-styled graphics provide a sense of nostalgia that truly bring me back to my gaming roots. While the game borrows from numerous classics in terms of gameplay style (Metroid, Castlevania, Ninja Gaiden, Bionic Commando), the way that it combines them all give it a unique feel and fills a need that I have been wanting to fill in recent games that I’ve played. 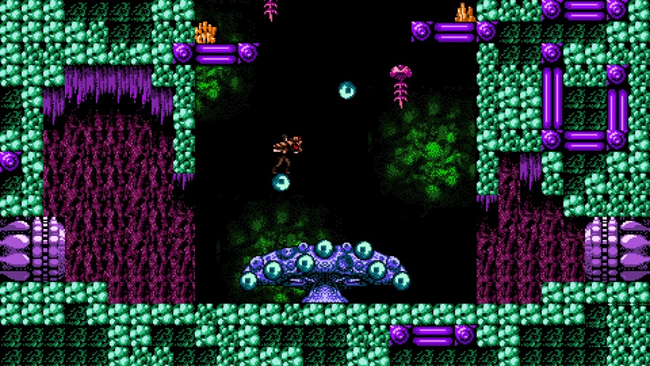 One of the unique mechanics in the game deal with “glitching” the game. In Axiom Verge, glitches are (for the most part) things that you can do on purpose such as teleporting through walls and changing the ways that an enemy behaves. You can also use the glitch ray (Address Disruptor) to remove blocks on the screen to gain access to rooms previously unavailable or use it on enemies to glitch them. Glitching some enemies might result in letting you use them as a platform to reach an area that you could not initially reach, or have them destroy hidden walls for you to find a hidden power up. My personal favorite are the enemies that once glitched spew out health when you are so dangerously low that you are contemplating returning to a save point to stock up on health.

The overall map is rather large and traversing it over and over again can be a bit of a hassle. I made it a point to always go back to previous areas whenever I got a new upgrade which might allow me to access previously inaccessible areas of the map, simply because I am a completionist and wanted to find as many hidden items as I possibly could (although I must admit, I didn’t do very well with this given upon my first play through of the game I only uncovered 90% of the map and 70% of the items). The map is set forth in a way with each area being fairly self contained with minimal tie-ins to other sections. There is one particular area in the middle which traverses the whole length of the map to provide access to various sections. While this particular aspect did not bother me as much, given that I enjoyed simply frolicking along the various environments in Sudra, I can see how it might seem tedious to other players who are more in a hurry to simply complete the game. 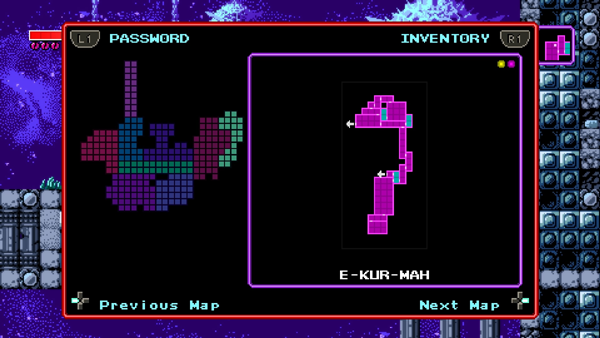 As mentioned previously there are a number of weapons available which can be found throughout Sudra. Initially, I was incredibly excited when I discovered a new weapon. I would equip it, use it for a few seconds, but then quickly realized that despite having so many weapons available, in reality, there were maybe only three that I used for the vast majority of the game as they were seemingly so overpowered that using the others would result in taking longer to kill enemies or inevitably me taking more damage. 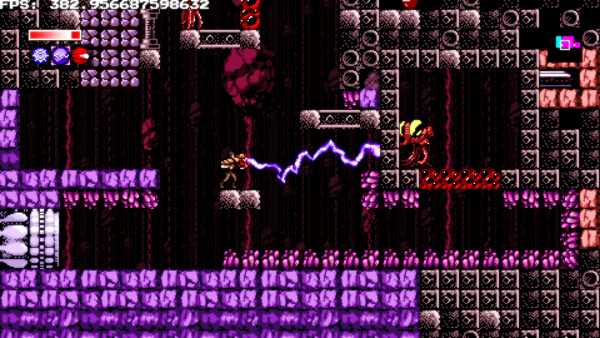 Another awesome feature in Axiom Verge is the included “Speedrun Mode” which is specifically designed for competitive streamers to sit down for a few hours and make their way through the game as fast as they can. While playing in Speedrun Mode, the game is optimized to allow you to play through quickly by eliminating all dialogue and cut scenes, removing the randomized content in the game, and putting an onscreen timer in the top left of the screen for you to keep track of your times in each area.

Overall Axiom Verge is a fantastic game. It borrows from numerous gaming classics while adding new mechanics, which provide a fresh feel. Glitching enemies, teleporting through walls, and the exploration kept me thoroughly entertained throughout my 14 hour playthrough and honestly I find this game to have considerable replay value with all the hidden items and Speedrun Mode. Axiom Verge pays homage to some games that truly set the bar high and make it difficult to live up to, but in my personal opinion does a very good job. 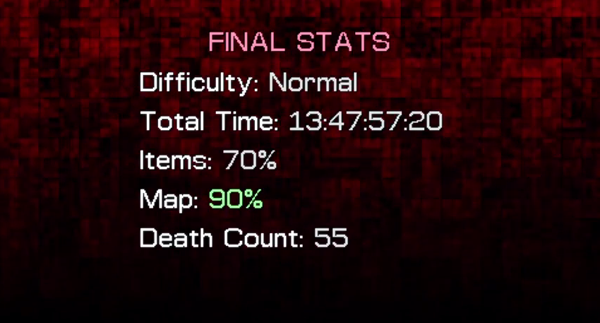