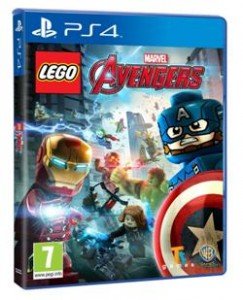 Just another brick in the wall?

As the 20th title in the licensed LEGO series of 11 different
franchises (excluding LEGO Dimensions)
LEGO Marvel Avengers follows on from the success of 2013’s LEGO Marvel Superheroes.

The big question is as always with new LEGO releases:

Is LEGO Marvel Avengers well constructed, or is it a brick too far?

We know what to expect from LEGO releases by now. After so many years of brick bashing and stud collecting across some of the most iconic locations in cinematic history, we know that there’s almost no chance that this will be a terrible game. I don’t think that’s ever been in doubt. What NewGamerNation is going to take a look at, however, is how much fun can be had with characters and locations seen barely 3 years ago. Surely spending more time with these so soon, will mean the experience feels less special, less innovative, less fun? It’s time to suit up as we review LEGO Marvel Avengers! 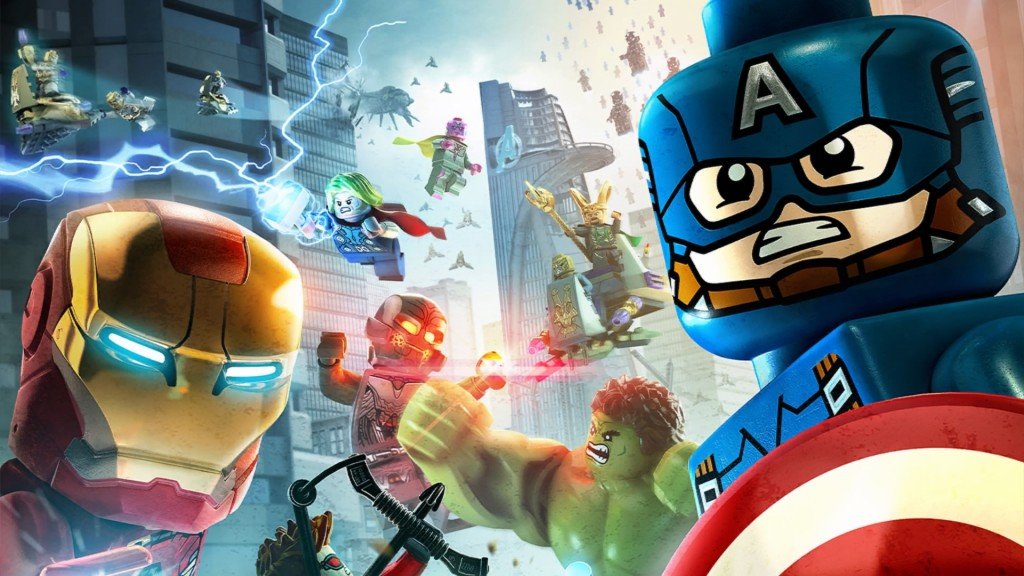 Traveller’s Tales are proven masters of creating enjoyable stories from much-loved properties and the same is true here. I expected the character roster to be a re-tread of the previous Marvel iteration, but I was pleasantly surprised to find that it is an Avengers game and as such, it’s mostly rooted in the hugely successful Marvel Cinematic Universe (MCU). The Avengers team has had hundreds of folks in its ranks since the comic began in 1963, and yet TT have managed to not only include pretty much all of them (even so far as Veil, a character who lost her powers and returned to school in the comics), but they’ve taken great care to make sure that each and
every one of these characters feels how you’d expect a little LEGO version of them to feel. Captain America feels lithe and athletic while Iron Man feels sturdy and powerful, but it’s not limited to the big names; This also
includes more obscure entities like Reptil who feels clumsy on the ground but nimble and quick in the air.

That care has been taken to apply unique characteristics to over 200 characters. With at least 2 playable
characters on-screen at any one time, there are now possibilities for “team-up” moves. Any combination of any 2 characters from this gargantuan list creates a different move, depending on who you trigger the action as.
If you are controlling Thor and you team-up with Captain America, you get the Shield Blast from the first Avengers movie, but control Cap’ and team-up with Thor and Moljnir sends Cap’s shield flying between
enemies like the world’s most deadly ultimate-Frisbee! As Hawkeye with Scarlet Witch you’ll fire an arrow into the sky which she will deftly split apart and fire in all directions or mix Black Widow with Quicksilver to create a
furious tornado of bullets. Each move can be performed after you fill a meter for your character based on how many hits you land on your enemies. Once you begin experimenting with lesser known or non-super powered folks, the attacks begin to look a little similar. Strangely, these team-ups don’t make Co-Op any more engaging. It’s fine, but there are some sections where Player 2 is left alone while Player 1 handles all the action. There are also some peculiar Resogun inspired sections when playing in Co-Op. They appear in single player, too, but you’ll most likely tire of them quickly as they seem almost entirely pointless. 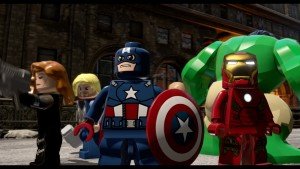 The voice acting for each character we know from the big screen has been lifted straight from the films, as we hear the dulcet tones of Black Widow, the grumble of the Hulk vs the softly spoken Bruce Banner and the terrible Russian accent of Quicksilver.
Everyone’s favourite cameo star Stan Lee is in there too (I’ve never had an issue with Stan
appearing in any Marvel property before, but I think he may be in this a little too much, appearing in what seems like every role requiring
a civilian, as well as several other
appearances which seem out-of-place and
spoil the joke)

The genuine voice work lends a touch of authenticity to proceedings as the scenes are so faithfully recreated visually. But whilst it is nice to have the real actors providing the voices where possible, some notable
exceptions such as Red Skull, Bucky Barnes and Pepper Pots stand out more because of this. The quips made
by characters as you run around are also familiar. How this sometimes works better, is when lines are said at the appropriate time, but while the action it relates to has changed, such as Ultron’s “This is going very well”
referring to himself winning lots of canisters of Vibranium from an arcade claw-machine, or Hulk getting angry because he dropped his ice-cream cone. As the audio has been directly transferred to the game though, it sounds a little out-of-place every now and again. While effort has clearly been made to clear up background noise, it leaves some clips sounding hollow. Not enough to be a real issue, but just enough to detract from the overall experience. In the cases of Agent Coulson, Peggy Carter and Maria Hill, their actors have returned to provide some additional material to fill in some gaps in the story, but that’s it for new voice acting from the stars. 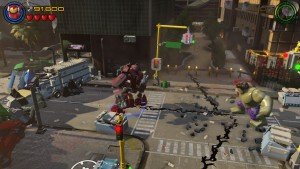 Re-enact Iconic Scenes From The Movies

If you follow the story fairly strictly, you may not notice until the very end, but the game plays out from several hub areas (similar to how New York operated in Superheroes). These areas include Manhattan (of course) Hawkeye’s Farm House, the Heli-carrier, Sokovia and more. These hubs act as rest areas between the main missions, rather than a starting point for each one. Each hub is so loyally depicted you’ll have no trouble finding your way around. Some of them will seem very familiar to those who played Superheroes and it was a bit disappointing not to see some new depth added to, say the Heli-carrier, which would have benefitted from being a little busier than last time.

I’d say a fair amount of knowledge of the source material is required here in order to to keep up with what’s
actually going on. I’d imagine this won’t be an issue for many, as most players will likely be Marvel fans (like me), but to newcomers or those who are just LEGO videogame fans, the story will likely be a little confusing. There are handy briefs from Maria Hill which pop up occasionally before a new level begins, providing a little exposition to keep us on track but the way you jump from set-piece to set-piece and landmark to landmark,
becomes disorienting. Each level is based fairly tightly on locations from the films with objectives to complete that match those of the movies, as well as some that don’t. For example, while invading Strucker’s Castle (from
Age of Ultron) at the start of the game, you’re tasked with disabling the shield surrounding the building (as they do in the film) but then with dismantling 3 large Anti-Air guns (which they don’t). As expected, some parts of the films have been sifted out, such as the more violent scenes or some of the slightly more adult language. This is understandable as the game could be played by youngsters, but as an adult with a fully functioning memory, it’s jarring when your favourite lines from the movies are cut short. 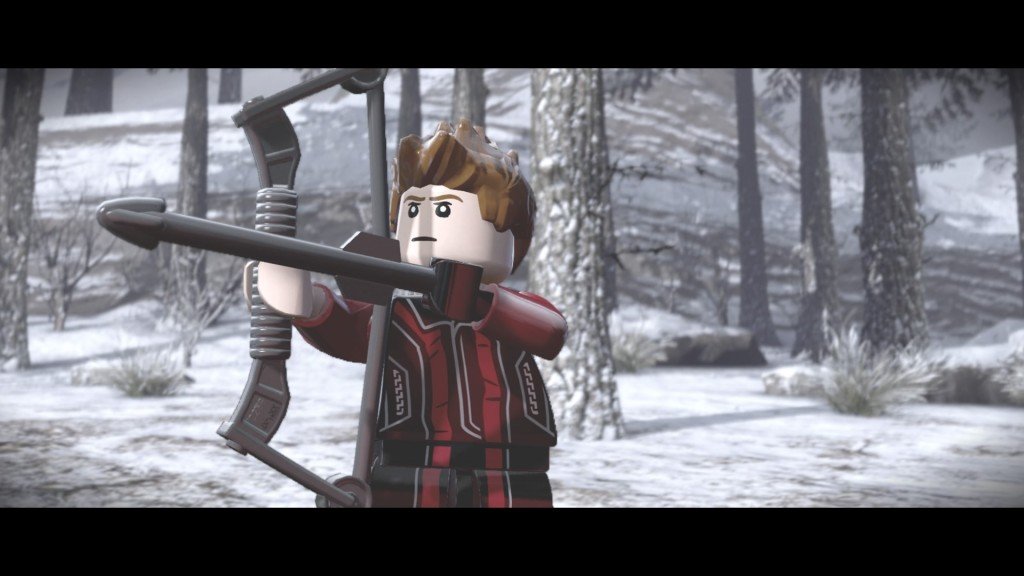 Keeping an eye on things – Hawkeye is a stand-out character

I enjoyed some of the canonical objectives as well as getting to explore and dig out little secrets and nods to the MCU (including some nifty after-credit sequences) but I often found myself being hampered by unclear
objectives or by a seemingly never-ending supply of bad guys to beat up. I’d want to crack on with building something or be busy trying to solve a puzzle or access a new area, while being constantly harassed by my own team of clumsy, villainous cheerleaders, hampering my every step with sporadic gunfire. It remains fun to beat up these guys, but it does curb your enthusiasm once you’ve noticed they are ignoring your on-screen pals and are only interested in attacking you. There are two main campaigns focussing on the Avengers and Age of Ultron storylines which will last for a little under 4 hours a-piece, but that puts you at about 25% completion, meaning there is a huge amount of replay value, as usual.

“…being constantly harassed by my own team of clumsy,
villainous cheerleaders, hampering my every step with sporadic gunfire”

The characters, environments, and objects (like gun emplacements or barrels) look fine; notable only for their similarities to the on-screen versions of themselves, but the new effect applied to the infamous LEGO studs is gorgeous – They now look better than the real things! Strangely, other than the studs, I didn’t notice anything I thought looked remarkable or that didn’t look like it could have been played on a last-gen console, apart from the sheer number of objects active on-screen at any one time. The final show-down in the centre of the now-floating city of Sokovia (I told you the story doesn’t make much sense if you haven’t seen the films…) has all the main protagonists, plus Ultron, plus Ultron’s army and a whole bunch of other bits and pieces flying around in the melee, which is very impressive. 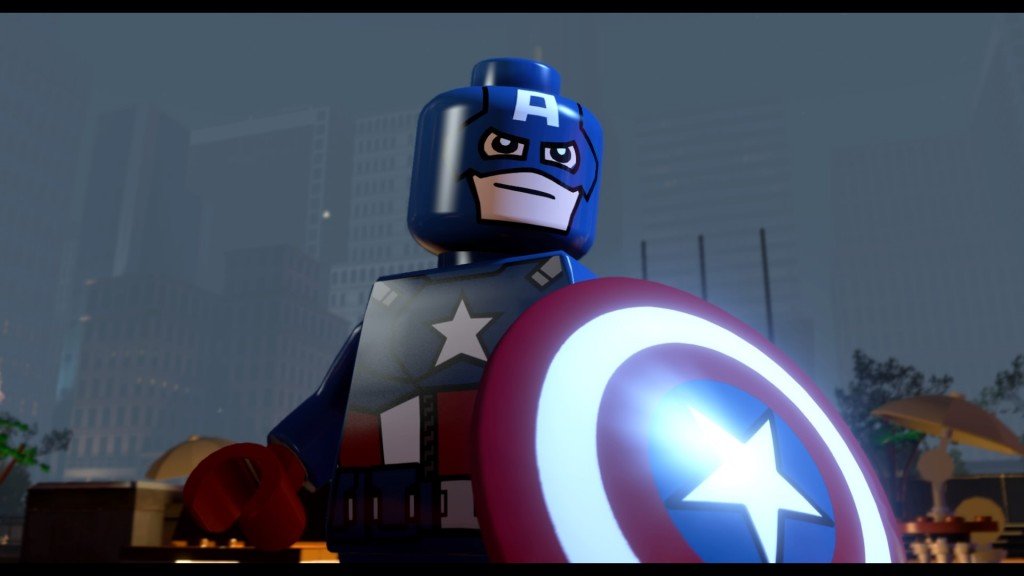 This review is based on a review copy of LEGO Marvel Avengers for the PS4 developed by Traveller’s Tales and published by Warner Brothers Interactive Entertainment.

Avengers Assembled | LEGO® Marvel Avengers Review
All in all, LEGO Marvel Avengers is an enjoyable enough game, especially for MCU fans, but so many things stop it short of being anything more than OK. There are far better LEGO titles out there (LEGO Marvel Superheroes, for one) that are more worthy of your time, but if you are a real Marvel or LEGO fan, you’ll surely be satisfied with this. Brilliant movie references and a huge roster of playable characters with fun outfits and powers do little to make up for the poor story-telling, lack of innovation, frustrating objectives and occasional, but not game-breaking, glitches.
Overall Score6.8
Positives
Negatives
2016-01-29
6.8Overall Score
Reader Rating: (3 Votes)
7.1