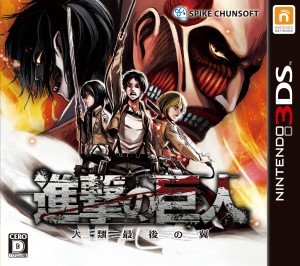 Earlier this week the immensely popular Attack on Titan Manga, created by Hajime Isayama and adapted into an Anime by Wit Studio and Production I.G, received a video game adaptation titled  “Attack on Titan: The Last Wings of Mankind“.

Developed by Spike Chunsoft exclusively for the Nintendo 3DS, and released in Japan on December 5th 2013, the game is best described as a “co-op, online miltiplayer action game” that allows you and your friends to team up and battle the Titan threat in various gameplay modes.

There is no official word yet as to weather or not Attack on Titan: The Last Wings of Mankind will receive a western release, but for now here’s a 20 minute long gameplay demo showcasing character creation, item customization, a collection mode and Human Vs Titan combat.