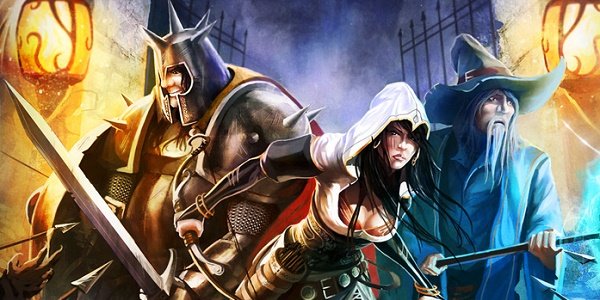 There are two main types of platformers: there are your fast-paced, crazy, in-your-face, just try to keep up games, and then there are your slow puzzle type games. Trine has always been the latter, focusing on intellectual challenges over reflexes. You shouldn’t expect to run through these levels at a blistering pace with enemies and all sorts of traps raining hell down on you. This is a methodical game that rewards patience and creativity rather than blindlessly jumping about. Trine 2: Complete Story is a must buy; that is, if you don’t already own it.

Trine has always stood out from other platformers ever since its original release back in 2009. It could possibly be the most visually stunning 2D platformer to date. With beautiful set-pieces and colorful art design, Trine certainly catches your eye from the moment they see the screen. The backdrops are crafted with deep colors, wonderful lightning effects, and exotic landscapes. A lush forest’s true beauty is revealed, and a fiery dungeon’s nightmarish terror is realized all with the detail and graphical presentation. Who knew a 2D game could look so good? It’s remarkable how agitated you feel when you a dark cavern filled with spiders, and how you release a breath once you arrive back in a more peaceful setting. Of course, this is being reviewed on the PS4 so it looks incredible. The previous versions (excluding the WiiU) were running at 720p with 30fps, on the PS4 it runs at a full 60fps at 1080p, and if you are lucky enough to own a 3D TV, you can even play it in full 3D as well. I remember playing Trine 2 back on the PS3, and there was always a severe drop in frame-rate when there was too much fire on the screen, but that’s no longer a worry. Trine succeeds once again in being a visual masterpiece. 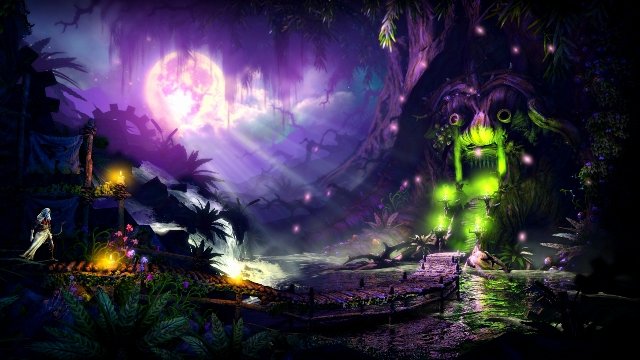 The pretty graphics alone are not what makes Trine so immersive, but everything the game does. The musical arrangement is incredible, from the majestic music that carries a magical element, to when it livens up when an action segment is occurring, it’s perfect. Their character designs, artwork, sculptures, and everything little tiny detail is all excellently crafted to bring life into the world Trine creates. Trine does create quite the world as it transports you to a fantasy realm with three loveable characters on an adventure. There’s Zoya the Thief, Amadeus the Wizard, and Pontius the Knight. After saving the kingdom in the first game, they find the Trine has come to ask for their aid once more. Now, they are thrust into another epic adventure that involves magic forests, evil goblins, and princesses. What’s not to love?

Trine 2 tells its story with beautiful still artwork, great voice acting for all the characters, and well written dialog. The banter the three heroes have with one another while journeying through a level is often enough to get a laugh out of you. You will easily end up liking one of the three characters, if not all three of them. After beating Trine 2, you are immediately brought into the Goblin Menace DLC. All your skills carry over and it feels like you are just continuing the main game. This time, the story is told through cut-scenes instead of the still-art. In the Goblin Menace, Amadeus’ wife is kidnapped, and you must rescue her. It’s simply an excuse for the heroes to go on a third adventure in another land, and experience even more creative puzzles. 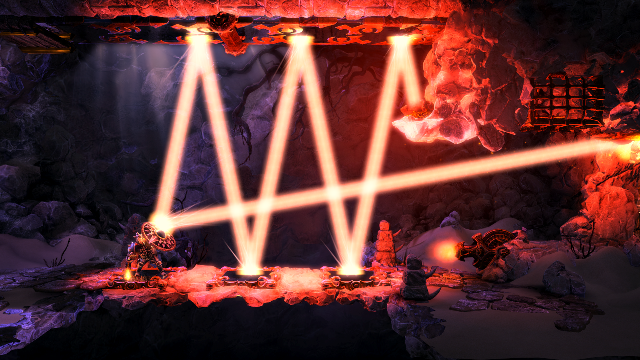 The heroes all have their own skills that help bypass obstacles. The thief has a grappling hook to get across gaps easily, as well as a bow and arrow to fend off distant enemies. The Wizard can move objects and create his own boxes and planks, but he has almost no offensive abilities. This is the opposite for the Knight, who has no real help when it comes to traversing the levels, but packs a mean punch for any enemy foolish enough to get in his way. As the game goes on, you collect experience and can level the characters up with new abilities. Of course, it should go without saying that you need to use the three of them together to get through each level.

Trine 2 isn’t simply about jumping from platform to platform to reach the end of the level, but using physics to circumvent obstacles. The uniqueness of Trine is the physics system it utilizes. Objects fall and move with incredible realism, and it is with this knowledge that you are able to complete so many puzzles. For instance: one time I was unable to jump a gap, so I made a plank and put it on the other edge hanging over slightly. It kept falling into the endless pit, so I put a block on the other end use as a counter weight. My character could easily make the jump after that. I also could have grappled across with the Thief, built a tower of blocks and leapt from a higher distance, or if I had a friend with me there would be even more options. 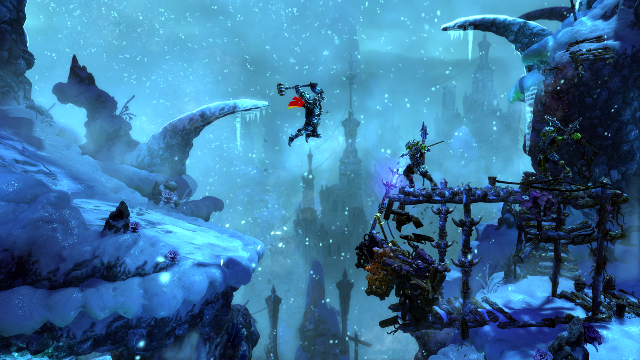 The physics are a wonderful touch that grants Trine 2 its uniqueness in puzzle solving, but the other amazing factor is how many solutions there are. As I just mentioned above, that one gap had multiple possibilities to get over it. This stands true for almost every obstacle in the game. The most fascinating thing about this is that no matter what number of people you are playing with, some obstacle that was easy one time, will be the most difficult another.

I played by myself for some levels and with people for other ones. When I was by myself, I could grapple past most obstacles rather easily, but when I played with other people, the Knight and Wizard couldn’t do that. We all had to wait and find a solution to get them across. Another time, there was a lever I needed to pull to open a door, but after I let go of the level, I only had a few seconds to get under the door. It took some really close timing and even an upgraded ability to manage it on my own. When I played with people, I held the lever, and let the other two players walk under it easily. This means you can get multiple playthroughs out of the game, because playing by yourself will have a vastly different experience than playing it with friends. It is recommend you play with friends, because there are generally some riotous moments that will have you laughing out loud while trying to deal with the simplest of puzzles. I lost count how many times I died because my brother found it funny to shoot the plank I was walking across, or how many times I used a box to block his jump across a gap. Simple things like killing each other for no reason always makes a game for fun for whatever reason.

The only really new feature for the PS4 version of this title is the touch pad. Normally, you can use the right analog stick to either shoot an arrow, block with a shield, or use magic. Now, you can use your finger on the touch pad to do these tasks instead. It really isn’t recommended, except a few occasions when I was making a plank, since that’s a simple swipe of the thumb. When trying to do precision tasks it isn’t worth the trouble. The touch pad was used at different times for experimenting sake, but it was almost always easier to use the right analog stick instead. 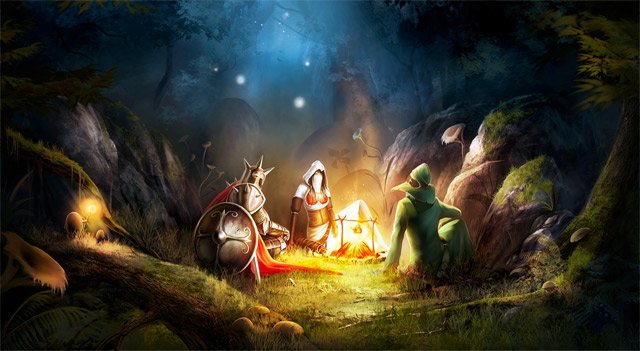 Trine 2: Complete Story is exactly what it sounds like, it’s the second Trine game with the DLC Goblin Menace attached. With drop-in/drop-out online co-op and local co-op too, this game is guaranteed to give you a great experience. The only real flaw are some minor camera issues, when working with people and surprisingly by yourself as well. The only other problem, and while it isn’t technically a flaw, there really isn’t anything new this time. That makes it pretty self-explanatory for everyone that has already played the game back on last generation. If you already own the game, there isn’t really any reason to repurchase it unless you really want it on your shiny new PS4, where it does look amazing. For those that have never played it, this is a great time to pick it up, and it is well worth the asking price.

This review is based off a review code of the Playstation 4 version of Trine 2: The Complete Story developed and distributed by Frozenbyte.

Did you like this? Share it:
As Beautiful As Ever | Trine 2: Complete Story Review
Positives
Negatives
8.5Overall Score
Reader Rating: (0 Votes)
0.0