I’ve spent the last week enjoying my time with my dusted off PlayStation3 playing Dengeki Bunko: Fighting Climax, a new 2D anime fighting game from SEGA ported straight from the Japanese arcade featuring a crossover between SEGA and light novel publisher Dengeki Bunko. The list of light novels being represented here are many and a bit niche too. Admittedly I’m only familiar with a few novels and anime featured here like ‘Sword Art Online’, ‘Black Bullet’ and ‘The Devil is A Part-Timer’. The games full character roster mostly showcases characters from the novels (12 playable characters and 23 assisting partner characters) much in the same way that the Marvel vs. Capcom series featured characters from Marvel comics, except this game seems to be paying fan service to Japan-only crowds. Only a couple of unlockable playable characters are incorporated from SEGA games, making it a total of 14 playable characters altogether. Those characters are Akira, a martial arts melee fighter from the Virtua Fighter series, and Selveria, a shield and lance wielding warrior from the Valkyria Chronicles games. All of the 3D background stage locations are themed from SEGA games, like NiGHTs, Sonic the Hedgehog, Virtua Fighter, Valkyria Chronicles, Phantasy Star Online 2, etc. In short, the game features light novel characters battling in SEGA worlds. 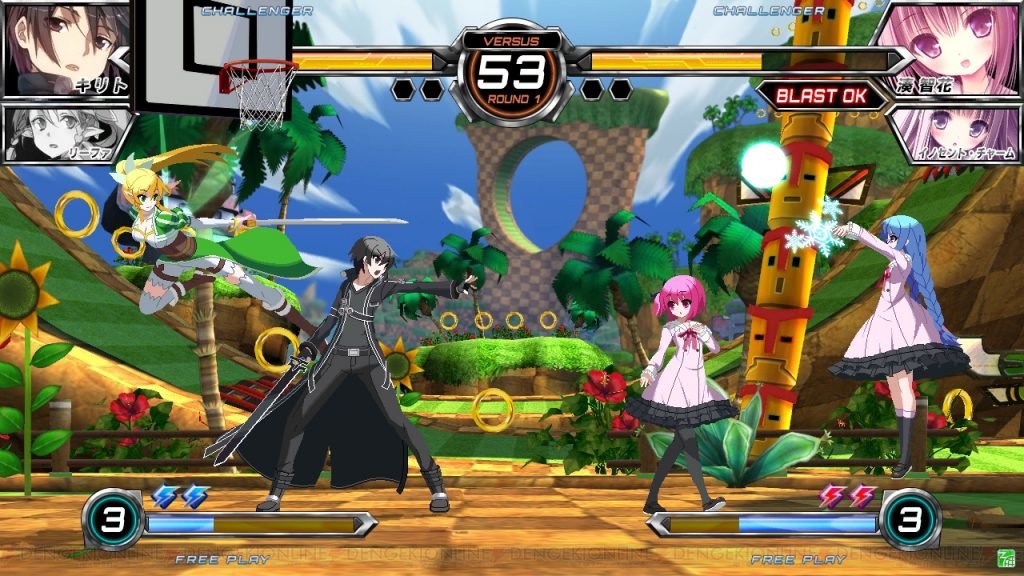 The game is primarily aimed at a niche audience–fans of niche anime, manga, and 2D fighting games, or all of the above. Stylistically it resembles other anime 2D fighters like classic Street Fighter II, BlazBlue or GuiltyGear, and this particular game is very approachable and easy to master. The move sets are similar for all of the characters, with minor alterations for each to add variety, making it easy to play with any character regardless of their weapons or abilities, but still requires practice in order to comprehend all of the subtle nuances and combinations. It somewhat reminds me of the learning curve for a game like Smash Bros., which has a simple command layout shared with all the characters, but a steep learning curve when it comes to mastering all the different combinations. Although, I would say that Smash Bros. is probably still far more complex in mechanics than this game.

I came here looking for a fight…so the absence of story or at least a minimal inclusion of story elements are fine with me. The story mode revolves around a goddess character that wears a Dreamcast controller on her head like a crown. She magically transports the light novel characters into SEGA worlds to fight to save the dreams of the world. A little bit of story text and dialogue transpires before each fight, although they are all pretty much following the same story through to the end. Surprisingly, one of the features of the console version is ‘Dream Duel’ mode which adds extra story vignettes before each battle not seen in the arcade version. I imagine super fans of the light novels would probably appreciate this more, but otherwise it’s the same as regular arcade mode except the main difference is that you can choose the order of enemies to battle.   It is definitely anime in every aspect. If you distilled an anime show down to its crazy action sequences, that’s basically what you get during the fights in this game. The slick 2D high definition gameplay animations looks like a live action anime show, complete with Japanese voice acting during battles and flashy over the top action sequences that light up the screen when you unleash a super moves. 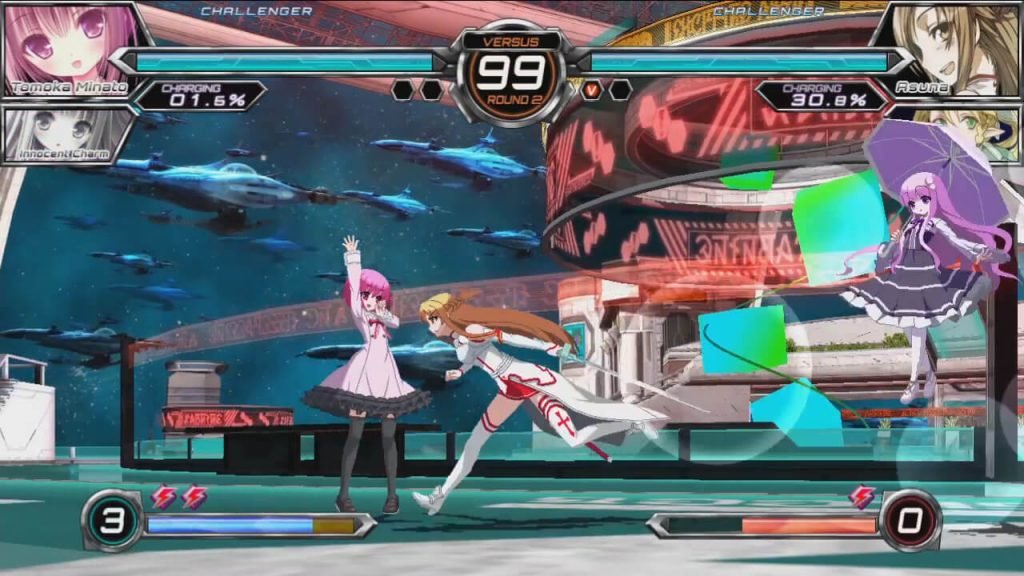 The game plays a lot like a Street Fighter game, except these characters also use a mix of combat weapons like swords, dual swords, lance, guns, some use elemental magic like lightning and ice and others simply melee. In the main story mode you go through a gauntlet of 9 stages, with 2 rounds each until reaching the final boss.  If you’ve played a Street Fighter game before then the screen layout should look familiar. The top of the screen displays your health meter, and the lower screen shows your special ability meter (Climax Gauge) which fills over time as you damage your opponent and allows you to unleash more powerful attacks at different levels. The face buttons on the controller correspond to low, medium and strong attacks, with one button allocated to summoning a second character for an assist attack. Most of the special attacks consist of a half circle motion from the directional pad followed by an attack button, although depending on the character and weapon, the attack will have different results. To make things easier, mashing an attack button will allow you to automatically perform a combo using one level of your climax gauge, and the shoulder buttons have button combos mapped out for you already which allow you to use even more special abilities called ‘Trump Cards’ which give your characters special stats like raised attack and defense attributes, escape blasts, or allow for special combos.

Going into this game I wasn’t familiar with most of the characters in the roster or the light novel properties their based on, but I still enjoyed my time learning all of their weird quirky move sets and seeing their special ability animations. One character materializes street signs and car doors as weapons, while another little school girl turns you into a basketball and runs back and forth bouncing you across the stage before dunking you.   Another slides across the ground on a sheet of ice like ‘Iceman’ from X-Men and uses wind attacks to send you whirling into the air while defending herself with a giant snowflake shields. Another materializes a second sword to duel wield, while another shoots lightning beams from across the screen like ‘Pikachu’. Yet another butterfly winged lady summons a robot to do all of her combat for her. It’s all very fun to watch, especially when assist characters jump in with their moves too. 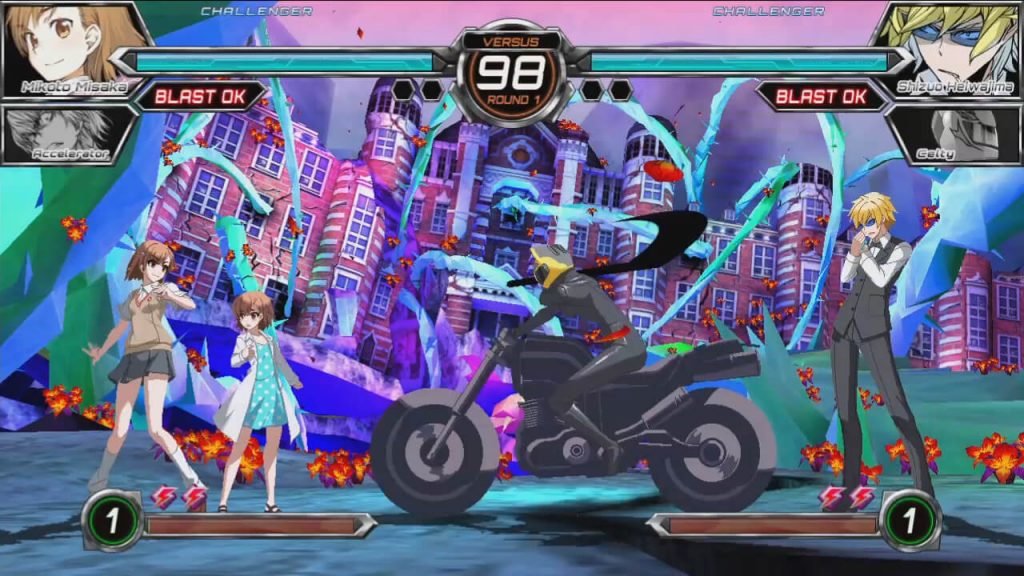 While I found the character art and background to be a bit jaggy on my screen, the spiffy animations, character design and attractive 3D backgrounds still made the game play enjoyable. I love seeing the Sonic the Hedgehog ‘Green Hill Zone’ loop-de-loops and spinning gold rings in the background, or the tanks from Valkyria Chronicles, or the space station from Phantasy Star Online 2. The game has mostly Japanese audio with English subtitles, but anime fans might prefer the authenticity anyway.

Aside from the two main story modes and few extra characters to unlock, the game also features a few extra modes like online network mode to battle against opponents across the globe via PSN. Seeing as how this is a review copy, and there doesn’t seem to be that many players online at the time of my review, I can’t quite describe that experience too much, however the few times I have been online, I haven’t had any hiccups, except for long waiting times in lobbies on occasion, but that’s probably due to the lack of players owning the game. Even still, being a niche fighting game, I doubt that a large community will grow in the near future, unless by some means the game becomes super popular? There is also versus mode for couch matches or you can play against the computer if you choose. There is also a challenge option which features a score attack, time attack, survival mode and any game play is rewarded with in-game currency to unlock customizable icons and character plates displayed during online matches. It doesn’t reinvent the fighter genre, but it still looks, feels and plays great! If you like niche anime or 2D fighting games, it’s a pretty solid choice.

This review is based on a review copy of Dengeki Bunko: Fighting Climax developed by French Bread, Ecole Software published by SEGA.