I have a nostalgic fondness for JRPGs, a genre that admittedly peaked during the height of the PlayStation 1 & 2 era, and as their popularity waned over the years they were relegated to niche status, with their lasting appeal mostly satisfying nostalgia and anime fans. With the migration from 2D sprites to 3D, made possible by the increased power of newer gaming systems, JRPGs started to look more and more like the live action anime cartoons on TV that in the past they could only represent with basic sprites art, but are now capable of including slick in-engine 3D cut-scenes, voice acting and flashy combat animations that blur the line between game and TV show. It’s no wonder anime is used so extensively as a selling point for current JRPGs. Though, despite the heavy anime fan appeal, one of the major issues with current JRPGs is that they still remain largely formulaic underneath their shiny coats, not having evolved very much from the grind focused combat and linearity from the sprite art days. Most JRPGs are still stuck in the past, in a state of suspended growth in innovation for risk of breaking from a safe and tried formula players are familiar and comfortable with. 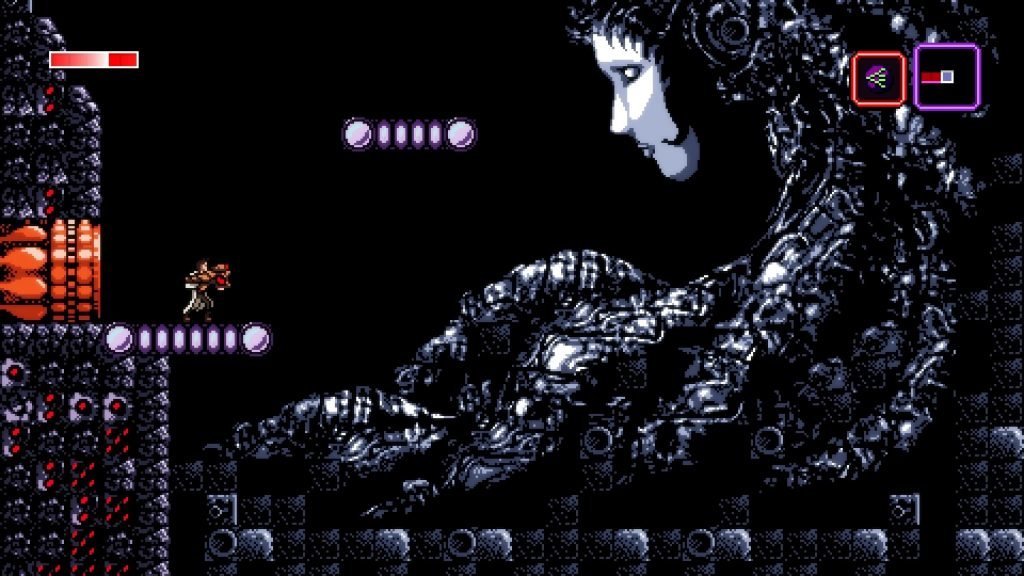 I’m prefacing this review with a comparison to the JRPG genre because, like JRPGs which once reigned over earlier console generations, 2D platformers and 2D action games also dominated alongside, but the transition into 3D gaming triggered their demise to come much sooner, leaving the 2D genre in a state of suspended growth as well, relying mainly on the indie developer scene to keep them alive today. I could also place overall blame for this on the decline of the Japanese game industry as a whole. In any case, most modern attempts at recreating 2D platformers and 2D action games are still hindered in innovation because they are still stuck in the past and their appeal still relies heavily upon evoking feelings of nostalgia. While newer 2D games might have beautiful aesthetic design, be it an authentic retro sprite look like Shovel Knight, or a gorgeous photorealistic look like UNRAVEL, they still adhere to safe old rules, without making any attempts to iterate on an old formula, which raises the question of whether or not it’s better to just go back and play original classics instead of poor attempts at a nostalgic experience?

Which brings me to Axiom Verge, a faithful throwback 2D Metroid clone that actually finds ways to iterate on its influence, evoking familiar feelings of nostalgia from the wonderfully 8-bit retro style visual design and its accompanying deep, ominous, booming chiptune soundtrack. Starting up the game brings back fond memories of popping in the original Metroid game cartridge into the NES and then being greeted by similar ominously dark, deep booming chiptune sounds on the main title screen. It indicated something both mysterious and yet a bit scary at the same time was awaiting, almost warning you away from picking up the controller.  What followed after starting a new game was a challenging adventure through dark haunted labyrinths, with strange alien creatures and secrets to discover. A lonely adventure that gave players little help in the way of direction, but instead asked them to think for themselves and thoroughly explore each environment to discover rewards, pushing you to try anything and everything in your arsenal to make it through. (Capcom tried to capture a similar nostalgic sentiment when they released Mega Man 9 & 10 which were very faithful throwbacks to the early cartridge games look and feel.) 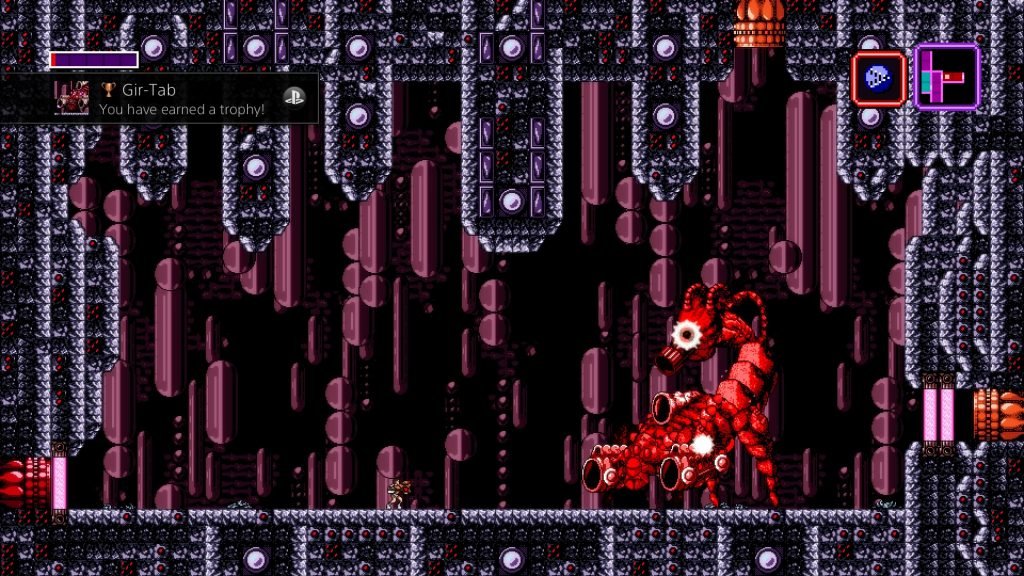 While Axiom Verge looks and sounds familiar, it actually changed up the traditional Metroid arsenal, which is surprisingly the main reason the game feels so fresh and new. Instead of just upgrading your primary weapon to unlock doors to progress further as in Metroid and Super Metroid, Axiom Verge features weapons that also work as tools that affect the environment, encouraging you to poke around any and every suspicious wall, open crevice or mysterious glitching sprite tiles that might turn into a floating platform or lead to either a useful power-up or passage into the next area. Just as in Dark Souls, the game gives you very little information in the way of direction. That is left up to you to figure out. You mainly have to backtrack and search elsewhere if you hit an obstruction, hitting up every tool in your arsenal hoping to see if you can create an opening of some kind, which sometimes adds a bit to the games detriment. You might feel like you wasted time experimenting with having no luck in return. The game definitely does not hold your hand. It is influenced from a time when games required you to think for yourself without any references or outside help and encouraged you to experiment with different solutions to open the way forward and discover secrets.

However, the game does offer modern conveniences in the way of frequent save points that also serve as checkpoints, making dying not much of a big deal as you just respawn at the last save point with your recently acquired weapon or character upgrades left intact. Although, even basic enemies and their strategic ranged attacks can prove to be challenging or frustrating after seeing frequent death screens, and backtracking is an inescapable feature of this style of game.  You also have a mini-map in the top-right corner of the screen and have access to the full map via an in-game menu to make navigation and backtracking easier. 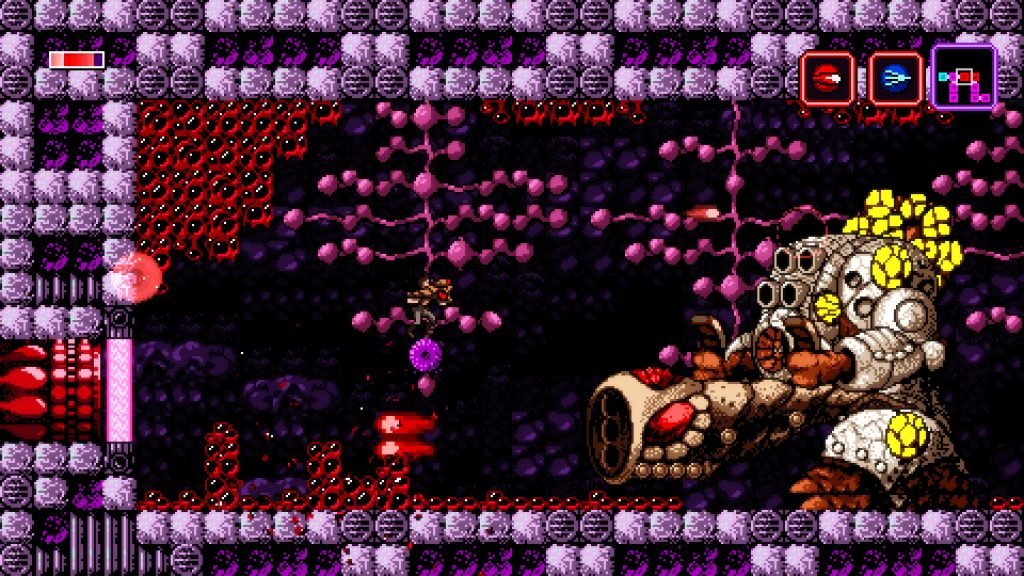 As this is a PSVita focused review, I need to point out that I did encounter performance issues when it came to the freezing or long load times when respawning after death. This isn’t such an issue on the PS4 since you respawn immediately after dying and doesn’t break the game flow at all, but the latency on PSVita after re-spawning can get pretty annoying, especially if you find yourself dying a lot after dealing with a particularly tough boss or if you have to run back through a section with particularly annoying enemies. Aside from that the game looks superb, colorful and vibrant on the PSVita OLED display and the soundtrack sounds amazing. The visual aesthetic doesn’t lose much detail after being shrunk down to fit the PSVita screen due to its minimalist pixel influenced graphic style. The tiles are wonderfully animated, giving the feel of traveling through a living organism at times with gross pulsating veins and vessels. It’s especially satisfying to see enemies explode into gooey starbursts. The PSVita also adds some amenities like weapon mapping to the corners of the front screen for fast weapon swapping.